The Air Force ROTC Detachment 90 that supports the University of Northern Colorado was recently recognized as the best in the nation after winning the prestigious Right of Line Award, the first time the detachment has won the award.

Presented by the Air Force ROTC commander at Maxwell Air Force Base in Alabama, the award honored Detachment 90 as the top large detachment in the country, besting 49 other large university detachments across the country. 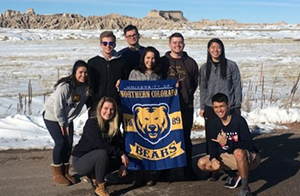 “I decided to join the AFROTC program at UNC because it was a smaller, more tight-knit group of people who had a close bond compared to other colleges,” said Olivia Oldham, a freshman studying Biology for Pre-Health and Chemistry at UNC. “UNC has the most determined cadets who are ready to face any of the challenges thrown at them: They know their knowledge better; marching is a breeze for them, and they have more intimate training time because it’s a smaller program.”

Jacob Hale, a senior majoring in Meteorology and minoring in Aerospace Studies, describes the group at UNC as a “second family” that supports one another through the highs and lows of the college experience.

“The cadets at Detachment 90 see the expectation and set goals to exceed that expectation; the hard work and dedication of everyone in the detachment was a piece in receiving this award,” said Hale. “I’m blessed to have contributed to a prestigious program that strives for nothing less than excellence, and this award is well deserved to everyone in Detachment 90 for their willingness to go above and beyond what is expected.”

Students in the detachment have the option of pursuing a minor in Aerospace Studies. Air Force ROTC develops leaders through, not only classes, but also hands-on management experience and valuable leadership-building exercises. The detachment also is involved in color guard events at events, UNC’s Veteran Services and more.

“One of the things that makes UNC special for us is the Meteorology and Nursing programs, because CSU doesn’t have those, and they’re in very high demand in the Air Force,” said Lt. Col. Adam Jung, an assistant professor of Aerospace Studies. “We highly value the rich diversity at UNC and are excited about UNC becoming a Hispanic-Serving Institution.”