In light of Campus closure regarding COVID-19, employees in the college of Natural and Health Sciences are working remotely and faculty are teaching classes virtually in an effort to best support our campus community. We ask for your patience as some services may be limited and response time may increase. We appreciate your understanding as we prioritize health and safety. Updates will be published to UNC's COVID-19 information page as the situation develops.

With new guidance coming from the Centers for Disease Control and Prevention and the State of Colorado, the University of Northern Colorado has made the following decisions:

Ongoing updates will be published to our COVID-19 information page as the situation develops.

The UNC School of Nursing subscribes to a philosophy of nursing that views the patient holistically. Congruent with the belief in the dignity and worth of people is the belief that the individual has a right to be an active participant in the decisions concerning his or her well-being.

The School of Nursing, approved by the Colorado State Board of Nursing, strives for excellence as reflected in highly qualified faculty, rigorous academic standards for students and a commitment to quality professional practice outcomes within all healthcare settings.

The baccalaureate degree in nursing, master's degree in nursing, Doctor of Nursing Practice, and post-graduate APRN certificates at the University of Northern Colorado are accredited by the Commission on Collegiate Nursing Education. 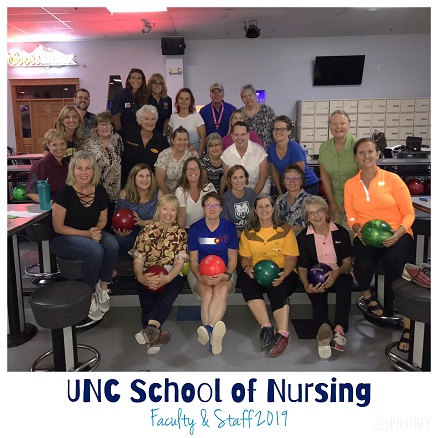 Understanding social justice, reserving judgment about others and learning about personal biases are important lessons for nursing students, but UNC Professor of Nursing Faye Hummel points out that these lessons aren't always easy to bring to the classroom. That's one reason why each semester, Hummel and her colleagues set up a poverty simulation for nursing students.

The simulation kit, developed by the Missouri Community Action Network, helps give participants a sense of how it feels to live in poverty.

"It really brings the notion of equity and social justice to someone's inner soul. You may dismiss it when you're in a classroom and someone's just talking about it, but it's much more difficult when you're immersed in the situation, having the frustrations and the stresses associated with not getting by that it brings that whole concept of poverty and disparity and inequity to life," Hummel says.

Held in the University Center Ballrooms, the simulation includes nearly 80 nursing students who are assigned a role within their simulated family. Twenty faculty and staff members act as employers, bankers, pawnshop owners, and service providers. Katrina Einhellig, an assistant professor of nursing, plays the role of a drug dealer, while UNC police officer Larry Raimer brings law enforcement to the imaginary community.

Families start in groups at the center of the room, with service providers on the periphery. Each simulated week lasts 15 minutes, with a five-minute weekend; there are four weeks and three weekends during the simulation.

As the simulation begins, the mood is calm, and students are orderly and optimistic. By the third simulated week, when a whistle blows to signal the week's start, participants run to be first in line for employment or services. A few families face mortgage foreclosures.

Senior nursing student Mandy Alvarez -- who played the role of a 38-year-old mom -- was surprised by the simulation's intensity. She started the second week with no groceries, and no time spent with her teenage daughter or husband.

"At the beginning," Alvarez says of fellow nursing students who made up her family, "we thought we had a plan for how we were going to navigate through the month. But as it went on, we just lost control a bit."

Although no one in her simulated family was truly going hungry, the experience still felt real, according to Alvarez.

"To not ever feel particularly successful was the most powerful part for me," she says. "I have a better appreciation for the constant, negative walls always rising to meet you."

Hummel thinks that Alvarez's experience reflected the stress that many of the students felt. "Many say they're very happy it was only a simulation," she says.

It's an experience UNC nursing graduates are able to apply during their work in healthcare.

"They've come back saying that when they've been dealing with patients who are poor, they recognize that poverty sometimes is really beyond an individual," Hummel says.

As students debrief at the end of the simulation, they take with them a changed perspective.

"I've heard people say they were still affected by it long after we were done," Alvarez says. "We've all talked about how it took us a couple of days to come down from the experience. In class we talk about health disparities, and the kinds of challenges that families might be facing, but the simulation really made people feel it."

UNC Bears go out into the world to do BIG and significant work. Meet Meghan Sirochman, BS Nursing, 2006 and a Nurse Manager in Seattle.

The best thing about being a nurse is the people I get to meet along the way.