The Legend of Totem Teddy

The Legend of Totem Teddy

When a UNC alum gifted the university with a totem pole, he also gave the school its Bear mascot. That totem pole—nicknamed "Totem Teddy" by students at UNC, resided on campus for nearly a century, enduring tarring, feathering, and kidnapping from opponents and being covered and protected by UNC students with everything from paint to metal vests. With its sacred beginnings in Alaska, adventures in Colorado, and its return to the tribe it belonged to, this beloved icon is layered with stories. Read on to discover the meanings, the memories and the myths that surround Totem Teddy.

In 1914, a crate arrived at the University of Northern Colorado from alumnus Andrew Thompson, superintendent of schools in southeastern Alaska. Within the crate was a totem pole that would become emblematic at UNC for 88 years, giving the university its bear mascot, garnering the nickname “Totem Teddy,” and standing as a touchstone for school spirit.  The first mention of the Bear Clan pole in Greeley appeared in the Christmas issue of the school's newspaper/magazine, The Crucible, in 1914.

In 1947, after a new technicolor paint job, Teddy was kidnapped and not recovered until he was found almost a month later on the oval at CSU. One year later, the bear, severely pecked in spite of his armor, was removed from the totem pole and placed in a glass case in the Carter Hall Library. Outside, a 600-pound cement replica supported in part by a steel rod embedded in the pole took the real Teddy's place atop the pole.

By 1953, the totem pole had been moved from its original position in front of Cranford Hall to a location outside of Bru-Inn. While there he was sawed in half, toppled, set afire, tarred and feathered and generally vandalized by school rivals.

Sometime in the late 1950s, President Ross had seen enough and Teddy was removed to a warehouse for repair and storage. In 1962, Michael Sheehan (BA-63) launched a petition drive to bring it out of hibernation. "I wanted to see the totem back on campus before I graduated," he says. He gathered more than 1,000 signatures and marched into Ross' office to demand Teddy's return to campus. Ross glanced at the petition and told Sheehan, "Why didn't you just ask?" It was soon reinstated, and housed in the ballroom in Gray Hall until the new University Center--with a centerpiece atrium designed especially for Teddy--was completed. There he remained until 2003, when he embarked on a new journey—this time a cross-country trip that took him home. 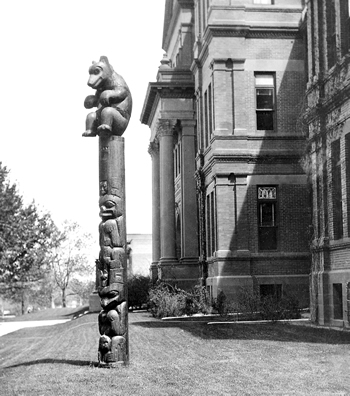 No one knows how Andrew Thompson came to possess the totem in the early 1900s. Some think it disappeared when a smallpox epidemic caused the village to be abandoned; others suspect profiteers of removing it under cover of darkness. Over the years, the Tlingit (pronounced KLINK-it) tribe of Angoon, Alaska mourned the loss of the Bear Clan Totem and remained unaware of its fate.

But fate would bring about its return when, around 2002, UNC alumnus Peter Corey from the Sheldon Jackson Museum in Sitka, saw an 1890 photograph of the missing totem, and recognized it as UNC’s Totem Teddy. Corey told the Tlingit tribe he thought he might know where the Bear Clan totem pole had been all these years.

A delegation of the Tlingit tribe traveled to Greeley to determine if the campus landmark was their long-missing totem, and they confirmed its identity.

In October 2004, members of the Tlingit tribe returned to UNC. Scaffolding surrounded the totem, and the members of the Bear Clan sang “The Cub That Washed Away,” a traditional song about a mother bear who wanders up and down the riverbank looking for a cub swept away by the current. Storytelling, singing, and dancing marked the end of the totem’s UNC chapter, and the beginning of the totem’s journey home to Angoon.

The totem was carefully crated and packed the next day. Solomon Little Owl, UNC Director of Native American Student Services, accompanied it as it traveled from Greeley to Seattle via a moving van, and from Seattle to Juneau by barge. In Juneau, the two crates were loaded onto a ferry to Angoon, ending a round-trip journey some 5,000 miles—and 90 years—long.

Today it stands in a specially built atrium in a school in Angoon, once again at home among the Tlingit people. The Story of the Bear Clan Totem

The totem tells the story of a man named Kaats who goes missing after falling into the den of a female bear. He and the She-bear fall in love and have two bear cubs. Eventually, Kaats is found and returned to his human wife with the She-bear’s admonition that he is to care for their cubs, and is not allowed to talk to his human wife. When his human wife insists he stop ignoring her, he does so, breaking the bond with his bear wife. The cubs tear him limb from limb. Grieving, the bear wife tries unsuccessfully to restore his life. She sings a lament—considered to be the anthem of the Bear Clan—which the Tlingit people sing to this day. The She-bear is represented by the bear at the top of the totem pole, and Kaats, sometimes called the “Upside Down Man” by the Bear Clan, is shown at the base of the pole.