Kobe Johnson recalls the stressful months waiting to hear whether he would get the chance to pitch his family's product to potential investors on the popular TV show Shark Tank.

“We rehearsed until the words were carved in our heads, memorizing them until they echoed across our mind-scapes,” the UNC freshman and Anthropology major wrote in an email message regarding his preparation.

When the call from the show's producers came, Johnson was ready. He, along with his sister, Taylor, and father, Ron,  shared their product, Tailgate N Go, in front of the panel of entrepreneurs and a televised audience last fall. In the process, Kobe, originally from Grand Junction, became the first deaf entrepreneur to appear on the show. He said the realization of being on Shark Tank didn’t sink in until he was in the studio.

“Every time I watch the clip of us presenting our business to the Sharks, it doesn’t feel real, and the man impersonating me is clearly not me because there’s no way I’m actually on television,” he wrote. “But it is real; I was there! It is absolutely surreal to watch yourself on T.V.” 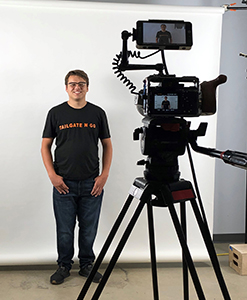 Above: UNC Freshman Kobe Johnson being filmed for a recap regarding his family's Shark Tank debut.

The pitch paid off, too: The family secured a $250,000 investment, the sum they originally sought, for a 20% stake in the business from recurring Guest Shark Matt Higgins, cofounder and CEO of private-investment firm, RSE Ventures, and vice chairman of the Miami Dolphins. Higgins also receives a per-unit royalty fee of $50.

Tailgate N Go is a portable, outdoor kitchen with boxes for utensils. The idea came to the Johnsons after a family camping trip for outdoor cooking with the goal of making cooking in the outdoors a little easier.

The boxes are customizable in color, range in price from $1,250 to $1,650, and include common kitchen tools and utensils as well as food and storage compartments. Attachments can be purchased to add on to a box including collapsible sinks, grills and more. 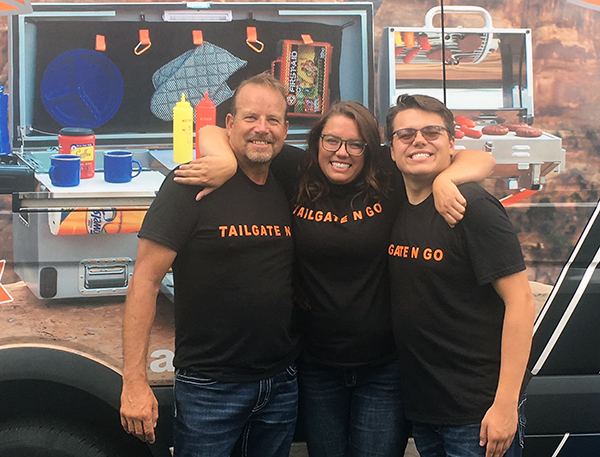 From left to right: Ron, Taylor and Kobe Johnson pose in front of an enlarged image of their product, Tailgate N Go.

“The future plans are to reduce the cost and price of the box, so they can be more inclusive and broaden the audience,” Kobe wrote.

His role in the company involves social media promotion, assembling the Tailgate N Go boxes and components, ensuring quality control and cleaning the boxes for packaging and delivery.

Kobe takes pride in being the first deaf entrepreneur on Shark Tank. He wrote that it was an “important milestone in deaf history” and had a “very important impact on the deaf community.”

His long-term goals involve changing the perception of deafness from being a disability to an ability in experiencing the world differently. He enrolled at UNC this spring semester, and wrote that he chose UNC because he wanted to “live in a familiar place with friendly people and in a relaxed college culture that also gives students the tools to succeed.”

Tailgate N Go aired on Oct. 27, 2019, on Shark Tank Season 11 Episode 5. Here are some recaps from the episode that were shared on Instagram: