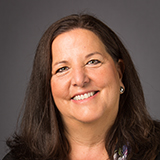 Dr. Janet Alcorn is the Director of the Tointon Institute for Educational Change at the University of Northern Colorado.  As the Director, Janet is responsible for creating, planning, and implementing a number of leadership academies throughout the year as well as providing direct support and supervision for the mentorship aspect of the Institute.

n her role as Director, Janet also participates on a variety of committees and panels related to education and principal preparation in Colorado.  She has served on the Public Education and Business Coalition’s committee on Principles for High Performing Principals, the Alliance for Quality Teaching’s committee on Teacher Retention in Colorado, the Principal Advisory Council for the Colorado Department of Education, and recently was a member of a CDE district audit team.  Currently, Janet serves as a board member on the Colorado Staff Development Council, a consultant for The Center for Strategic Quality Professional Development and a collaborator with Front Range BOCES, CSDC, CEA and other groups developing a teacher leadership development and certificate program and is on the planning board for the National Staff Development Council’s 2007 summer convention in Denver.  Additionally, Janet has taught classes at UNC to preservice K-12 teachers and students completing their principal licensure program.  Prior to coming to UNC during the summer of 2001, Janet was an elementary school principal at Sheridan Green Elementary School in Westminster, Colorado for seven years and an assistant principal at Shaffer Elementary School in Littleton, Colorado for two years.  Both of these schools are part of the Jefferson County School District.

Janet has her doctorate in elementary education and a master’s degree in educational administration from UNC where she received the Graduate Dean’s Citation for Excellence for her doctoral work.  Additionally, she has a teaching credential from the University of California at Los Angeles (UCLA) and a bachelor’s degree in political science from Occidental College in Los Angeles.  Her teaching experience prior to coming to Colorado in 1986 was in the Los Angeles Unified School District where she was a primary and intermediate teacher at Third Street School in the Hancock Park area of her native Los Angeles.

Janet’s husband, Dr. Mark Alcorn, is the Director of the School of Psychological Sciences at UNC.  His specialty areas are developmental and cognitive psychology.  Together, they have two sons, Jacob and Davis.  She and her family enjoy traveling throughout the world and basketball games on the driveway of their home.