What do these photos tell you about how their houses were like?

These new, one-story brick houses were built in Denver in 1938. They are located on the 1200 block of Grape Street in east Denver. 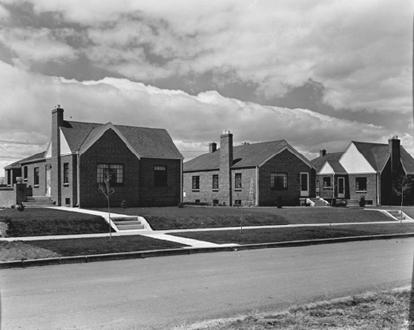 During the early 1900s, many people moved away from downtown neighborhoods. They built new houses and new neighborhoods at the edge of the cities. They used streetcars and autos to commute downtown to work and to do their shopping.

“Denver, in her general architecture, is more attractive than certain important cities to the eastward of her. Her houses are, for the most part, built solidly of brick and stone, and more taste has been displayed in them, upon the whole, than has been shown in either St. Louis or Kansas City. Like Kansas City, Denver has many long, tree-bordered streets lined with modest homes which look new and which are substantially built, but there is less monotony of design in Denver.”

This photo was taken in the Crestmore neighborhood in east Denver. The photo was probably taken during the 1930's.

Some of the new neighborhoods had more expensive houses than others. The houses and lawns in this neighborhood were much larger than those in the previous photo. Perhaps building larger, nicer houses was one result of relatively well-to-do people moving to Colorado. Many such people moved to Colorado because of its healthful climate.

“Denver occupies distinctly a unique position in the fact that while geographically it is in the heart or center of the West, yet socially it is entirely composed of Eastern people. This fact may in part be due to the climate, which has no equal in the entire world. Great physicians, eminent surgeons, and other prominent and leading men and women come here in search of health.”

This photo was taken in Denver's Country Club neighborhood. These houses were located next to fields in the countryside. 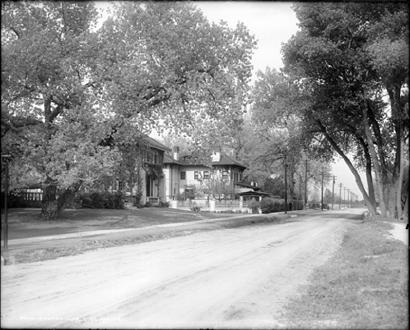 Wealthy people also moved toward the outskirts of cities during the early 1900s. The Country Club neighborhood in Denver was built at the edge of the city. Wealthy people wished to associate with and live near other people of wealth and therefore moved to such neighborhoods. Open fields are visible on the right side of this photo.

“The [social] clubs play an important role here [in Denver]. The Denver Club is the oldest and handsomest. Its annual ball is one of the great social events. (Here again we differ from other cities, as there is no [social] ‘season’; dinners, luncheons, balls, and dances are continuous throughout the year, as we are never forced to seek resorts [elsewhere] to avoid the summer’s heat and dullness.) The University Club and the Athletic Club occupy handsome buildings. The Country Club, with its tennis-courts, golf-links, and polo-fields, furnishes also a continuous source of outdoor amusement.”

This photo shows housing in a lower-class neighborhood located near the railroad yards in lower downtown Denver. The photo was probably taken during the 1930's. 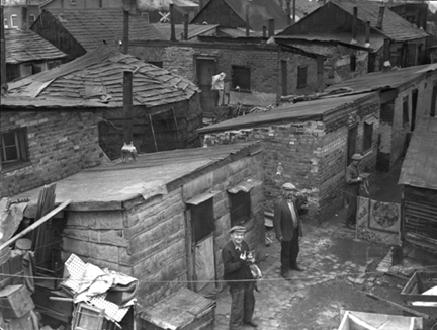 The poorest neighborhoods and cheapest housing usually were found in the oldest part of the cities. The houses in this neighborhood were built of railroad ties and used bricks. The residents seen in this photo were men who probably were unemployed at the time.

This was a barracks where people lived in the Japanese-American relocation camp near Granada, Colorado. The photo probably was taken in 1942. 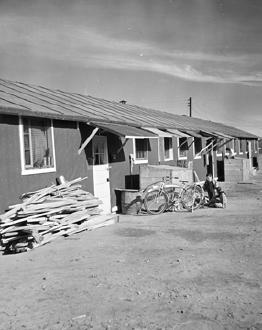 During World War II, the United States government moved over 100,000 Japanese-Americans from California to relocation camps inland. It did not trust Japanese-Americans to be loyal to the United States during the war with Japan. One of these camps, the Amache Center camp, was located on the plains in eastern Colorado. The people forced to move there lived in barracks like the one in the photo.

“When I first saw Granada [the location of the Amache internment camp], I thought ‘My God, is this it, or is this just another rest stop.’ I had never seen such a desolate place in all my life. There just seemed to be no one living there. But after awhile I realized there wouldn’t be any one there to hassle us like they did back home [in California], so that part of it would be okay.”