The Fred Bemis family built this house in 1889. It was originally located on Littleton Boulevard on the crest of a hill east of the railroad tracks. This house was selected to become a museum because is was a good example of common household size and of common architecture in the late 1890s. In addition, museum people kept track of information about the photo. They therefore know a good deal about the Bemis family. The house was moved to its present museum site in 1975. 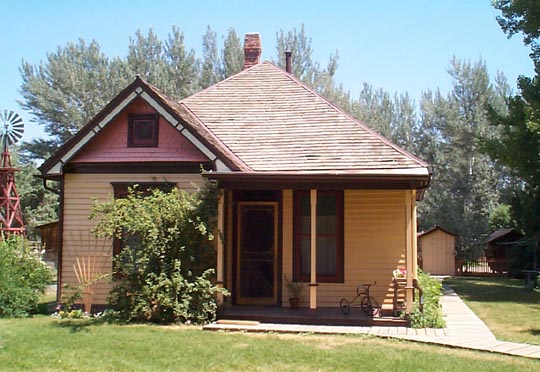 Again, this house was selected to become a museum because it was representative of a small family farm house. Also, farming was important in Littleton at the time this house was built and Fred Bemis was involved in both farming and stock raising. The farm house was built using balloon frame construction. This became the dominant building method in the 20th century. When the house was originally built, it had no electricity, although electricity was eventually added to the house.

The tool shed is a reconstructed building. It was based on historical photos taken in the Littleton area. Many small farms had buildings that were used to house tools and supplies. A shed like this one would have been in addition to the farm's barn. This shed uses balloon frame construction, wood sheeting material for the walls and floors, and a shingled roof. 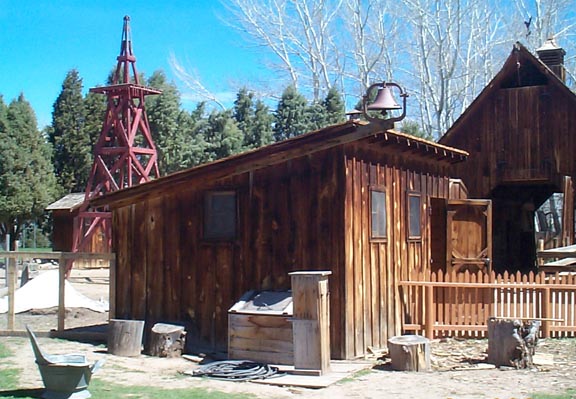 On the inside walls of the shed are many tools used for gardening, carpentry, and cleaning. The tools are laid out in a specific pattern. Most are hung on nails with an outline of the tools made in pencil. This makes it easier to put the tools away in their proper location. It also makes it easier to find them again. This was a common practice in the 1890s. Publications of the time show what was sometimes called a "fan pattern" in which tools were hung on nails or wooden pegs. Can you see any tools you recognize?

The garden area contains flowers, herbs, and vegetables. All the produce raised in this garden would have been found in gardens in Littleton in the 1890s. You can probably tell what some of the plants are from the photograph. You may be able to see corn (in the foreground), squash, and beans, among other varieties. Along the right side of the garden area are grape vines. At the end of the garden and in front of the house is a cherry tree. 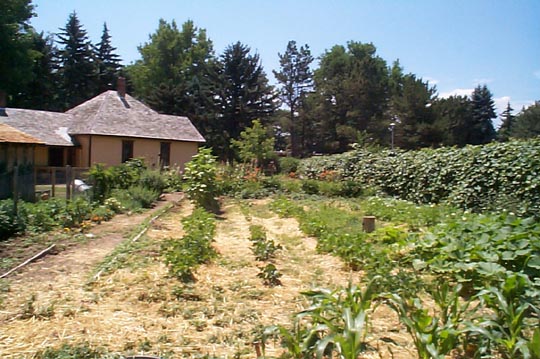 Even in the 1890s, the produce from a farm's garden was an important part of the family's food. Many of the things grown in the garden were canned to preserve them for use until the next summer's crops could be harvested. If you look inside the pantry of the Bemis House, you can see such things as canned carrots, beans, pickles (cucumbers), tomatoes, beets, and cherries, among other produce. Canning helped farm families eat well year-round, but it was very hard work.

The chicken coop housed chickens, turkeys, and occasionally guineas. The variety of fowl raised varied from year to year on many farms. All poultry currently raised on the farm, however, were also raised in the Littleton region in the 1890s. 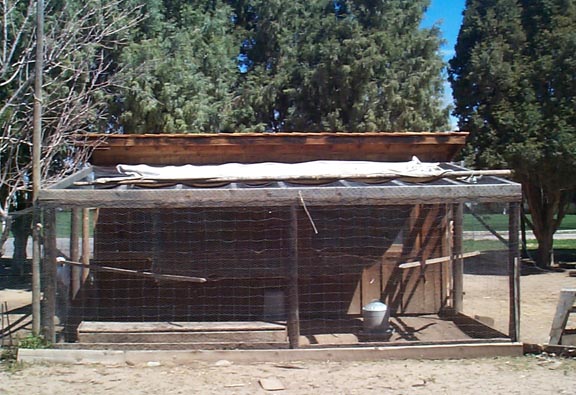 Raising poultry was often an important source of food. Farm families used the eggs and even the poultry itself. Raising poultry and selling eggs was also often a source of needed income for many farm families. That was especially the case if their farm was close to town.

The Eclipse windmill on the farm is a restoration. The entire wood tower, the mill and mill tail were all part of that restoration. The mill mechanism, however, is an original. It was found in eastern Colorado 15 to 20 years ago. The windmill stands over a well. The well water is drinkable by humans although most of it is used for other purposes. 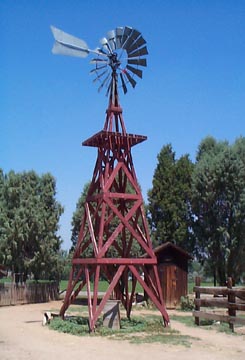 The pump at the left draws water from the well. The windmill cannot actually pump water now because the trees surrounding the farm get in the way of the wind. A windmill needs wind with a fairly high and constant speed to work well. That is why windmills worked well on the plains of eastern Colorado. Most of the water pumped from this well is used to water the farm's garden and livestock.

The smokehouse is of frame construction and has a cobblestone floor. The interior walls are of lath and plaster. They are plastered over to retain heat inside. This insulation also prevents the building from catching fire. The meat is hung on overheat racks. The wood used to smoke the meat is always hardwood--apple, hickory, or oak. The preferred wood is either apple or hickory. 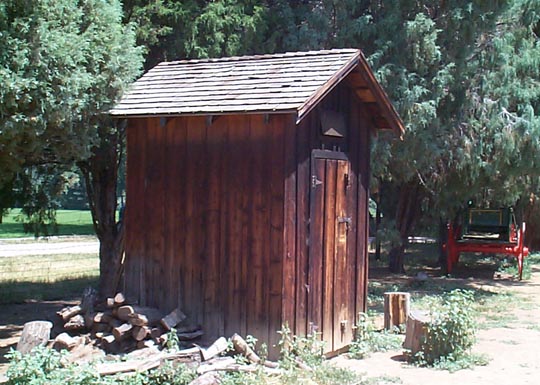 Smokehouses are used to flavor meat, but rarely to cook it. Even so, this smokehouse sometimes reach temperatures that will actually cook the meat. No soft woods like lodgepole or Ponderosa pine should ever be used in a smokehouse. Soft woods leave a residue on the wood inside. The residue will then taint the meat to be smoked. Even now, the smokehouse is used once or twice a week to prepare pork or poultry on the farm.

The barn has a central alleyway with stalls on either side. The horse stalls are on the side of the barn you see in the photo. A storage room is also on that side of the barn. This room is used to store tools and tack (e.g., harness). There are three different loft areas overhead. As you can see, the loft stores hay and alfalfa. It also stores straw. In addition, buggies and other wagons are often parked in the barn. 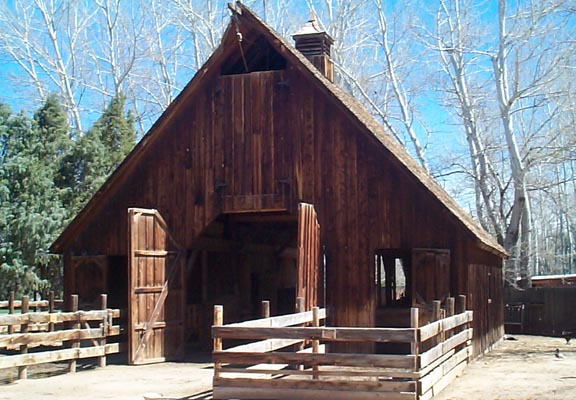 This barn is a reconstruction of barns that were common to the South Platte River Valley in the later 19th century. This post-and-beam barn was built at a community barn-raising. Post-and beam construction had long been a part of American building styles. Large timbers make up all the interior frame structure. The upright posts are held in place by braces. These, in turn, are held together by mortise and tenon joints. Wooden pins then hold these in place.

The hog house was built as an A-frame. Questions often arise as to why farmers would have built some of their buildings in this fashion. In fact, U.S. Department of Agriculture publications in the later 19th century recommended the style. These publications included plans for the construction of A-frame hog buildings. 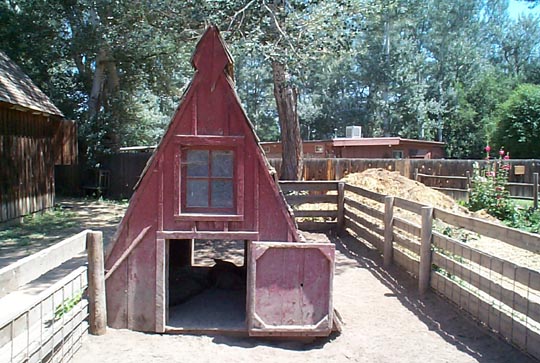 The triangle shaped A-frame has several virtues for housing hogs. One is that it allows the sow (mother pig), when she is having offspring, to lie down without rolling on her newborn piglets. There is also an air vent system at the top of the A-frame. At the front of the A-frame is an area that is often wet and muddy. The pigs like to lay in the mud to stay cool.

Behind the house and close to the pig sty is the corn crib. The crib was built up off the ground. One reason for that was to keep rats from getting into the corn. You can also see that there are spaces between the boards of the crib. These spaces allowed air to move through the crib and keep the corn dry. The corn crib was close to the pig sty and barn because most of the corn was used to feed the farm's animals. 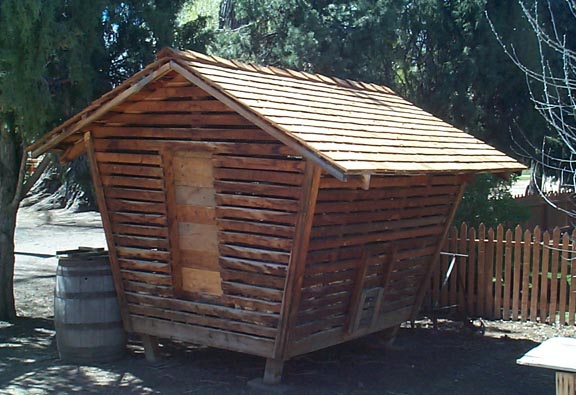 The corn crib was probably a more important building on an 1890s Colorado farm than it had been on an 1860s farm. The reason for that is that farmers probably raised more corn in the 1890s. Partly this was one result of irrigating crops. Colorado's yearly rainfall is small, usually under 20 inches. Than amount of rain is too little to raise most corn varieties. With irrigation, however, corn crops can get the needed water.

To begin, a blacksmith shop like the one you will see in the photos here was not likely to have been on a farm. Still, many farmers had to be handy with tools. Anyway, the items in this blacksmith shop included anvils, bellows, forge, and hand tools of various kinds. This shop is set up to represent the work of a blacksmith, not that of a farrier (horseshoer). 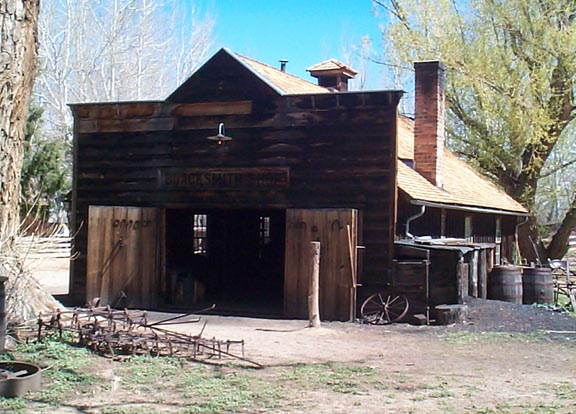 The blacksmith shop is a reconstruction rather than an original building. It was set up to show the blacksmith trade in about 1903. Littleton got electricity after 1903. So some of the tools in the shop ran on electricity. The building is of balloon frame construction. It has board and batten walls and a shingle roof. The shop has a wooden floor except around the forge. It has a dirt floor around the forge. That makes working with hot steel much safer.

This building is an ice house. For us, ice houses are rather unusual buildings. The main part of the ice house is the original building acquired from the Beers Sisters' Dairy Farm. It was located west of Littleton near some large lakes. In the winter, ice was cut and pulled into the building. Blocks of ice were covered with sawdust and stored inside the building (in the area to the right). The ice was used in warmer months to cool the milk on the dairy farm. Before electric refrigeration, ice was also used to cool food in ice boxes. Ice cutting was a local industry of some importance to farmers. 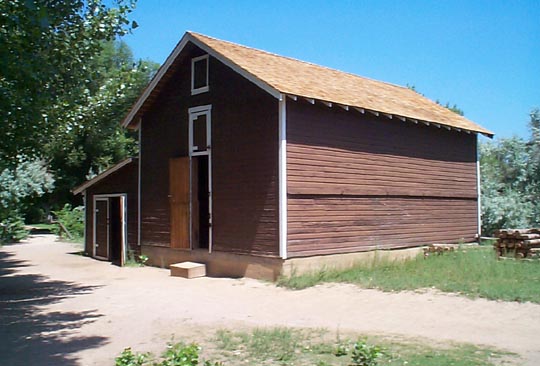 The Littleton Historical Museum restored the Beers Sisters' ice house mostly by painting and cleaning it up. They also put it on a concrete foundation, as on its original site. A lean-to shed (in the photo to the right) was added to store the ice cutting tools and boat. Cutting ice in the Littleton region at that time depended on the weather. Ice needs to be at least 12 inches thick to cut into usable blocks. Sometimes the weather is cold enough along the Front Range, other times it is not.

From the 1860s to the 1890s and beyond, American farmers used more and more machinery. On one hand, machines helped farmers produce more crops. This was good for consumers because the price of farm crops went down and down. Consumers liked that although farmers generally did not. Machines also made some of the work farmers had to do easier. On the other hand, machines made farming more expensive. This was a double problem because prices were declining. 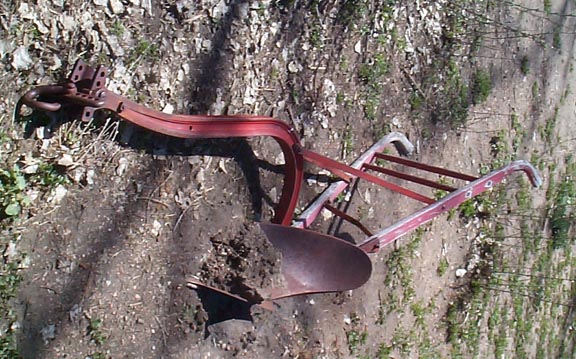 The machine in the photo above is a corn shelling machine. It is just one of a large number of farm tools and machines that have been preserved and can be seen at the Littleton Historical Museum. The primary power source for this machine was a person cranking the handle on the left side. The ears of corn were run through two shelling wheels. The grain spilled out the bottom while the cobs came out in the tray on top.