From 1800 to about 1840, beaver fur was in great demand for making felt hats. These were in fashion in Europe and in the eastern United States. The pelts of beaver brought an average of $4 a pound at trading posts or at the annual rendezvous. One pelt usually weighed about a pound and a half. The saying "six dollar a plew, prime," referred to a whole beaver pelt ("plew") in "prime" (or the best) condition.

The beaver coat was thickest in winter. That was the best time to trap beaver. But since trapping in deep snow during winter time was nearly impossible, the trappers got most of their pelts during the fall and spring hunts. 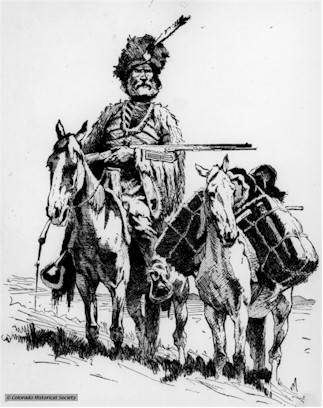 The vast majority of mountain men worked directly for a large fur trading company. These companies employed hundreds of trappers and hunters at a time. These hunters and trappers worked for wages. The companies supplied the hired trappers with their food, equipment, and other supplies. The furs produced by these hunters belonged to the company. Many, if not most, hoped to become tree trappers who worked for themselves, but few ever did.

"The difference between a hired and a free trapper was greatly in favor of the latter. The hired trapper was regularly indentured [worked under contract], and bound not only to hunt and trap for his employers, but also to perform any duty required of him in camp. . . . In return for this toilsome service he received an outfit of traps, arms and ammunition, horses, and whatever his service required. Besides his outfit, he received no more than three or four hundred dollars a year as wages."

Alfred Miller titled this drawing "trappers starting for the beaver hunt." The sketch suggests that mountain men hunted in groups. The fur companies usually sent out trappers in large parties. The more trappers working in the field, the more beaver that could be caught in any given season. Going out in large groups also provided protection from hostile Indians. 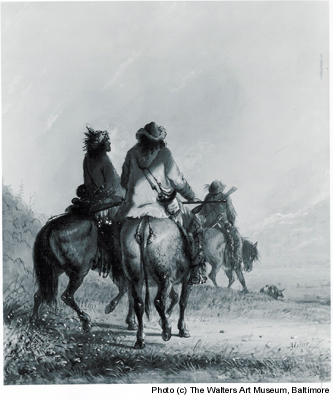 "On the 17th of March, 1829, the company, numbering about sixty men, left St. Louis, and proceeded on horses and mules, with pack-horses for the goods, up through the state of Missouri. . . . [After the rendezvous, Captain] Sublette then decided upon their routes, dividing up his forces into camps, which took each its appointed course, detaching as it proceeded small parties of trappers to all the hunting grounds in the neighborhood. These smaller camps were ordered to meet at certain times and places, to report progress, collect and cache their furs, and 'count noses.'"

The trappers typically moved up-current as they hunted for beaver in streams like the one shown here. This was so because the signs of beaver, such as tree shavings, would float downstream on the current. Signs of Indians or other trappers would also float downstream, telling the trappers that this was a place to be avoided. Most often, the higher the trapper moved upstream, the safer it was for them. 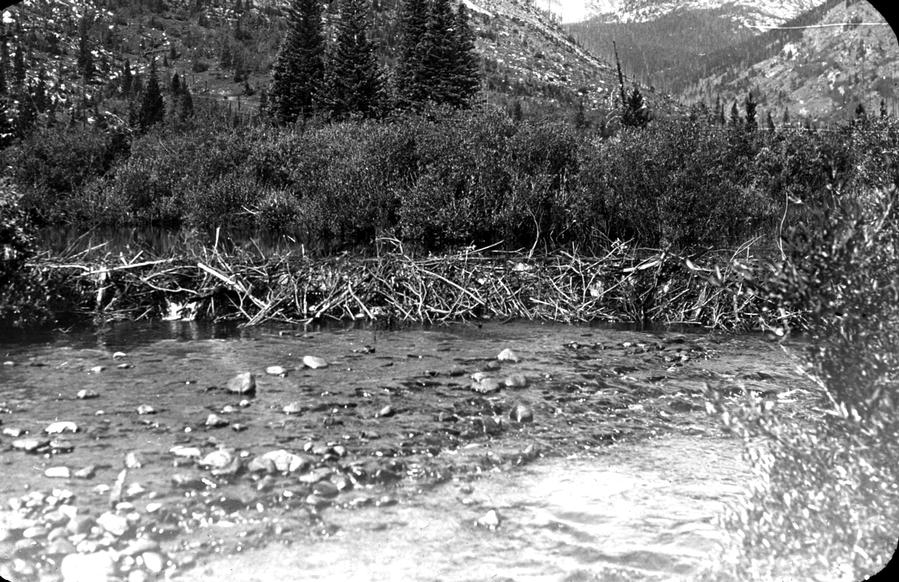 Beaver hunting and trapping was seasonal work. A beaver pelt was considered prime when it was most thick, which was in the winter time. However, trappers did not usually trap beaver in the winter, because the work was just too difficult then. So, trappers usually made two hunts each year--one in the fall (from September to December) and one in the spring (from March through May).

"Encircled with danger, they wander far and near in pursuit of 'sign' of beaver. Ever on the alert, a turned leaf, grass pressed down, or the uneasiness of animals, are signs palpable to him of proximity to an Indian foe, and places him on his guard. With these precautions, he generally outwits the wily savage under equal advantages."

Alfred Miller titled this drawing "trapping beaver." The sketch shows two trappers beginning to set their traps. Once the trappers found sign of beaver, the trappers usually set their traps in late afternoon. Since the beaver moves about at night, working at dusk allowed the trapper to avoid warning the animals of his presence. This also prevented other trappers or Indians from discovering the locations of their traps. This equipment was too costly--and could not easily be replaced in the wilderness--to risk it being stolen. 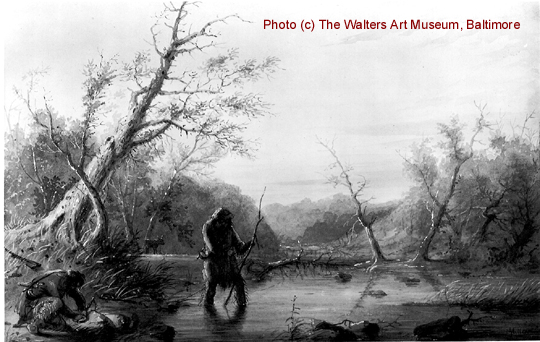 The trapper set his traps by wading into the water of the creek or stream. Working in the water was necessary for two reasons. First, the traps had to be set under the water to keep the ever-alert beaver from spotting them. Second, the water covered the trappers' scent. After setting his traps, the trapper also splashed water over his tracks on the stream bank to eliminate his scent.

"In hunting the Beaver two or more trappers are usually in company. On reaching a creek or stream, their first attention is given to 'sign.' If they discover a tree prostrate, it is carefully examined to ascertain if it is the work of Beaver, and if thrown for the purpose of damming the stream. Foot prints of the animal in the mud or sand are carefully searched for, and if fresh, they then prepare to set their traps."

Beaver lived in lodges like the one in the photo. However, they used pathways on the stream banks to get wood and mud into the stream. Trappers placed traps on these pathways. To entice the beaver to a trap, the trapper smeared castoreum (he called it "medicine") on the bank or near the trap, or on a stick attached to the trap. Beaver naturally emitted this substance to mark territory. So the smell of the castoreum attracted beaver to the spot where the trapper smeared it. This substance was extracted from small glands near the beaver's tail. The trapper carried this substance in a small wooden box. 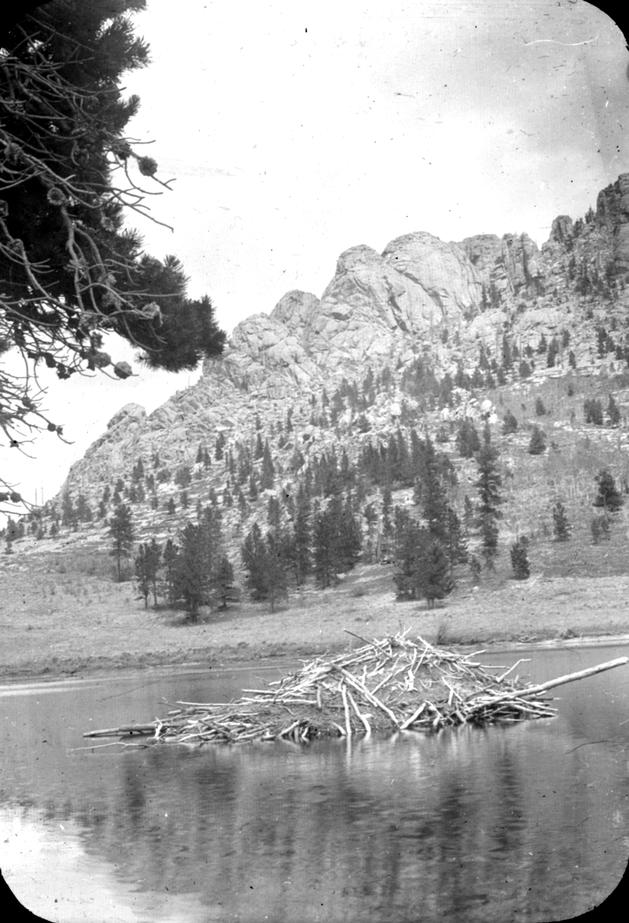 The traps, baited with castoreum, were placed below water in the normal run of the animal. The traps, which weighed from three to five pounds, were attached to a length of chain. The traps were heavy so the beaver could not swim to safety with the trap. The end of the chain was attached to a long stick--called a float--that was driven into the bed of the stream. This float was made of dry wood so the beaver could not easily chew through the stick and escape.

"[The trappers] sets his trap in the run of the animal, hiding it under water, and attaching it by a stout chain to a picket driven in the bank, or to a bush or tree. . . . The trap is baited with the 'medicine,' an oily substance obtained from a gland . . . of the beaver. . . . A stick is dipped into this and planted over the trap; and the beaver, attracted by the smell, and wishing a close inspection, very foolishly puts his leg into the trap, and is a 'gone beaver'. . . When a lodge is discovered, the trap is set at the edge of the dam, at the point where the animal passes from deep to [shallow] water, and always under water."

Alfred Miller called this drawing "camp fire--preparing the evening meal." The sketch shows a trapper preparing a buffalo "hump rib" for supper. Just as there were different kinds of trappers, there were also different kinds of other workers in a trappers' camp. In large companies, there were hunters, trappers, and camp-keepers. During the two trapping seasons each year, the duties of each group of workers varied a great deal. 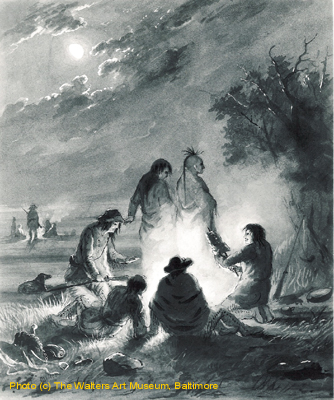 During the two trapping seasons, the trappers focused exclusively on trapping. At the same time, the hunters worked--as they always did--to supply enough meat for all the workers to eat. The camp-keepers performed all the grunt work of the camp. These chores included night watch, cooking the meals, and scraping, preparing, and pressing the beaver pelts.

"The duty of a trapper, for instance, in the trapping season, is only to trap, and take care of his own horses. When he comes in at night, he takes his beaver to the clerk, and the number is counted off, and placed to his credit. Not he, but the camp-keepers, take off the skins and dry them."

After the beaver were trapped, the pelts had to be processed. Usually this was the job of the camp-keepers. First, they scraped the pelts free of flesh. Then they stretched the pelts on round willow frames like the one in this photo to dry in the sun for a day or two. When the pelt was dry it was folded with the fur side in and marked with the trapper's name. The pelts were then pressed into bundles of about twenty pelts. Each bundle weighed about 80 pounds. These bundles or bales could then be packed on horses or mules or carried in carts or wagons. 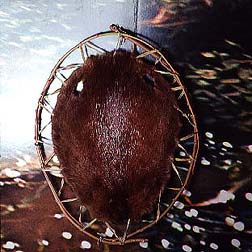 If the fall and spring hunts were successful, a trapping party could accumulate 150 to 200 pelts each season. As trappers moved their camps quite often, carrying around all these pelts was a problem. As a result, the trappers created their own store houses in the wilderness. That is, they dug holes in the ground in which to store their furs, until they were ready to transport them to the rendezvous or to a trading post. They called these underground storehouses caches.

"Early in the morning the hunter mounts his mule and examines the traps. The captured animals are skinned, and the tails, which are a great dainty, carefully packed into camp. The skin is then stretched over a hoop or framework of . . . twigs, and is allowed to dry, the flesh and fatty substance being carefully scraped (grained). When dry, it is folded into a square sheet, the fur turned inwards, and the bundle, containing about ten to twenty skins, tightly pressed and corded, and is ready for transportation."

As the diagram to the right suggests, the trappers' equipment included a rifle, sometimes a pistol, gun powder carried in a powder horn, and a bullet pouch. Trappers always carried a hunting knife, usually a famous "Green River" knife. Trappers also carried a wooden box that contained the castoreum used to bait beaver traps. Most also carried what they called a "possibles" sack or bag that contained such items as flints, awls, and a bullet mold. 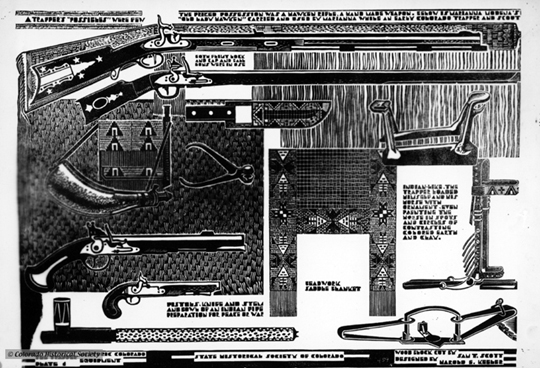 Trappers' equipment also included a horse and one or more mules to help the trapper carry his equipment and beaver pelts. So the trapper usually had a saddle, bridle, and an apishamore (a saddle blanket made of square pieces of buffalo robe). Trappers had a trap sack that usually contained from six to eight traps. Many trappers also carried a hatchet or tomahawk. All this equipment was quite costly and almost impossible to replace in the wilderness where they worked. Only at trading posts or the annual rendezvous could trappers replace lost or stolen equipment.

"On starting for the hunt the trapper fits himself out with full equipment. In addition to his animals he procures 5 or 6 traps (usually carried in a trap-sack), ammunition, a few pounds of tobacco, a supply of moccasins, a wallet called a "possible sack," gun, bowie knife, and sometimes a tomahawk. Over his left shoulder and under his right arm hang his buffalo powderhorn, a bullet pouch in which he carries balls, flint, and steel, with other knick-knacks. Bound round his waist is a belt, in which is stuck his knife in a sheath of Buffalo hide, made fast to the belt by a chain or guard of some kind. . . ."