The log cabin is an original, built by the McBroom family. Two McBroom brothers homesteaded in the South Platte River valley in the early 1860s. We think that this cabin is the oldest remaining log building in the South Platte and Littleton region. After the Littleton Historical Museum got the cabin, it began to restore the building to accurately reflect how a family would have lived in a log house during the 1860s. 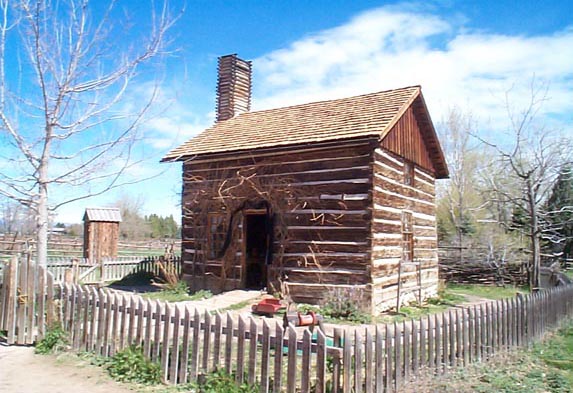 Restoring the cabin to near its 1860s condition was a big job. Many things had to be replaced, including doors, windows, floors, the stairs, and the chimney. The cabin was both chinked and caulked. Chinking is placing pieces of wood between the logs. Caulking is a mixture of lime, sand, straw (or hair) and water which seals the gaps between the logs. As the seasons change, the logs expand and contract. Replacing the caulking was (and is) a never-ending job.

Farms in 1860s Littleton were self-sufficient and did not special in any given crop or livestock. Most of the basics of life were raised right on the farm. One part of those basics was the vegetable garden at the back of the McBroom cabin. It is likely that these farmers grew onions, potatoes, radishes, cucumbers, and beans. They also grew other useful items such as gourds. Gourds were not edible, but could be used to make kitchen containers and utensils such as water dippers. 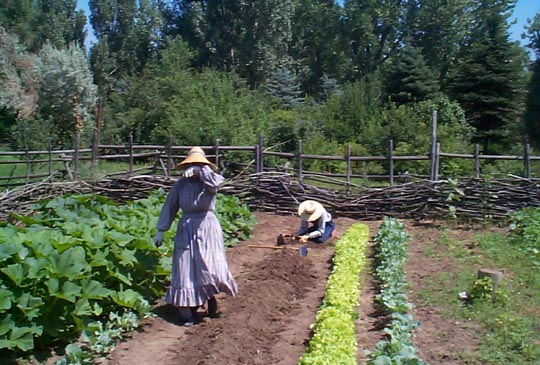 The vegetable garden was enclosed by a wattle or thatched fence. A wattle fence is a series of poles, tree saplings, and brush which are woven together. The tightly woven material kept chickens and other small animals out of the vegetable garden.

Farm families washed their laundry in a kettle heated over an open fire. A large cast iron kettle was usually used for this purpose. Often, there was also a large copper kettle that was used for cooking. Among the things cooked in this kettle were apples from the farm's orchard. Making apple sauce was one way to preserve them for later use. In either case, using an open fire outdoors used a lot of wood. Breezes and wind also blew ashes into the laundry and into the food. 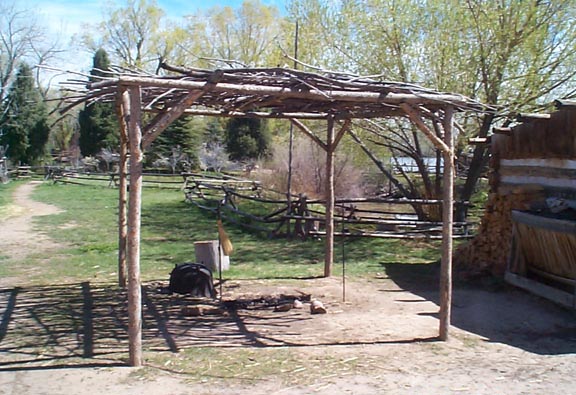 A very simple wooden shelter was built for this area. It has four open sides and a roof made of tree saplings. It was little more than a way to get out of the sun. In the summer time, the sun is hot and severe in Colorado. The sun also shines often in the winter months, but an open fire feels warm and pleasant in the winter. Doing the laundry outdoors in the winter, however, was probably not all that pleasant!

The lean-to is a log building in which is stored equipment, wood, and other goods. Part of it also serves as a chicken coop. The front of the building faces south and is open all across this side. It was purposely set this way so that in cold winter months the sun will shine into the lean-to. Quite often in winter the chickens are stretched out in front of the coop. It almost looks like they are sunbathing! 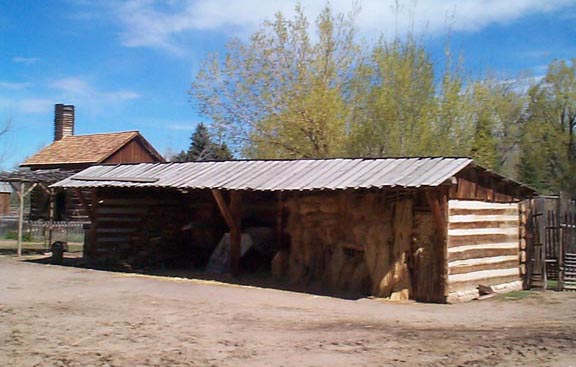 The inside of the chicken coop was made from lodgepole pine mixed with saplings that had been cut to clear the land. The saplings were nailed onto the lodgepole pine. The front of the building was covered with bundles of thatch (straw tied together and lashed to the front of it). During each season there is much repair work to do on the thatch bundles. Inside the coop are tree limbs set up off the ground. Chickens jump up on these to roost.

The orchard was also an important part of the farm. It has a variety of apple trees. These include Northern Spy, Spitzenburg, and Duchess of Oldenburg. The orchard also contains other fruits such as nectarines, plums, and pears. Concord and Niagara grapes were planted at the south end of the orchard. Some years these do very well. In other years, cold winter weather and spring frosts damage them. 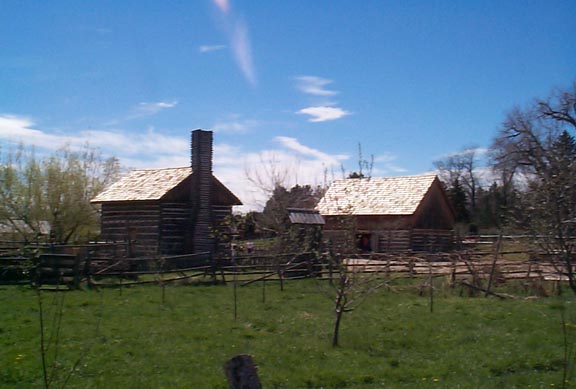 In the middle of the orchard are the bee hives. Bees are needed to pollinate the fruit in the orchard. In addition to that important role, the bees also made honey. Honey, of course, can be a good substitute for sugar. In frontier Colorado sugar was expensive to buy. In the 1880s, Littleton was considered by some to be the largest producer of honey in Colorado.

The barn is often the focal point of a farm. That is so whether the barn was built in the 1860s or the 1980s. It was (and is) very important because the barn shelters some of the livestock, feed, tools, and sometimes even the farm family. This barn was a reconstruction of a hand-hewn barn. It was built in the summer of 1985. But it was built according to the materials and knowledge of the 1860s. 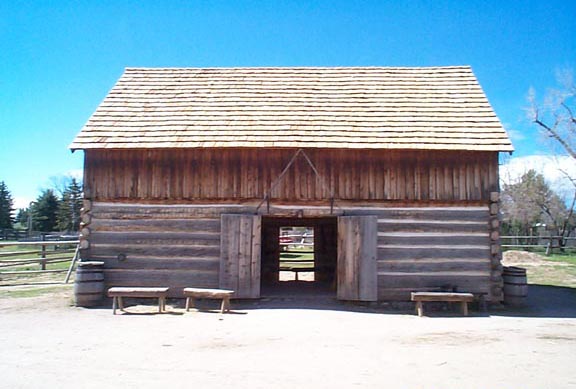 The barn was built of lodgepole pine. Lodgepole pine was ideal because these logs do not taper as much from bottom to top as ponderosa pine logs do. Each log was flattened on the sides. They were also peeled of their bark. The builders also used such tools as axe and adz to cut notches at the ends of the logs. Logs were used in the bottom of the barn and then sawn lumber was used on the top. The hinges for the doors and windows were made by local blacksmiths.

The sheep shelter was actually a home used by a family for a time. It was their first house and they lived in it a year or two. After the family moved into a larger structure, the shelter became an animal shelter. A number of families in this region followed the same pattern by starting in a small log dwelling. This specific shelter has an overhang above the front door. We don't know exactly how it was used, but it may have been used as a front porch when the family lived in this shed. Anyway, such overhanging roofs were common on similar buildings in the Platte River valley at the time. 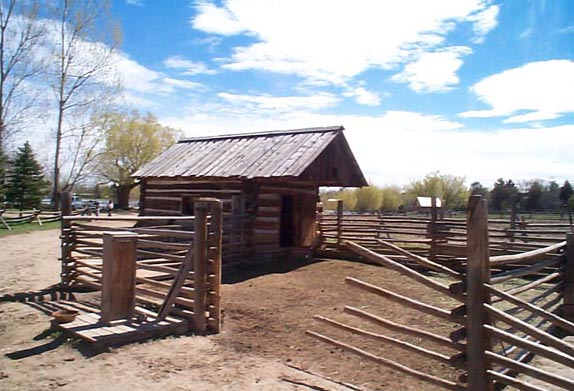 Merino sheep are now raised at the Historical Museum because this breed was important in 1860s Colorado. This breed is a primary wool producer. The wool is shorn once a year, usually in the spring. In the 1860s, the wool was then shipped by wagon to the nearest railroad, most likely in Missouri. Then it was sent to woolen mills in New England. The sheep lamb twice a year, in the spring and fall.

The corn crib was built up off the ground. It sits on stone columns which then support large hand-hewn logs. This method of building corn cribs allowed air to flow under the building. There was also no chinking or caulking between the logs that made up the walls. This allowed air to flow through the crib and keep the corn inside dry. Drying helped preserve the corn for later use. 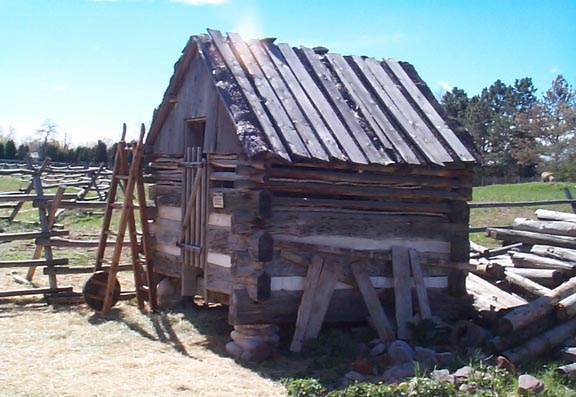 Farming began in Colorado along with the arrival of the first miners. The miners needed more than meat to eat, so some of them again took up farming. Some of the prospectors realized that there was more money to be made by "mining" the miners than in looking for gold. Many of the prospectors had been farmers where they had come from. So they already knew how to farm. They first settled in the river valleys where water was plentiful.

The fencing style you see at the left is called a jack-leg fence. The part of the fence that carries the long horizontal poles was built on the ground as a "X". The long poles were then nailed to the "X" with nails. These were probably cut nails from a factory in Massachusetts. 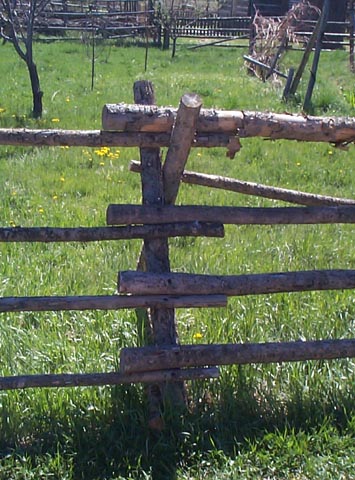 As settlers came onto their land along the rivers, there were only plains cottonwood and peach leaf willow trees. There were no oak or sycamore or other hardwood trees which they had used for fencing and building in the east and Midwest. One question that often comes up is, "were logs easy to get in the 1860s?" The answer is yes. Lodgepole and ponderosa pine were plentiful in the hills up-river from these farms. Farmers would go up-stream and cut poles and send them down the river.

The oxen shelter is made of a system of poles that are nailed together. The poles are either lodgepole pine or cottonwood saplings from along the Platte River. These poles were then covered with bundles of thatch. Thatch was made from the straw left after harvesting oats and wheat. The thatch covering protected the oxen from the winds coming from the west. 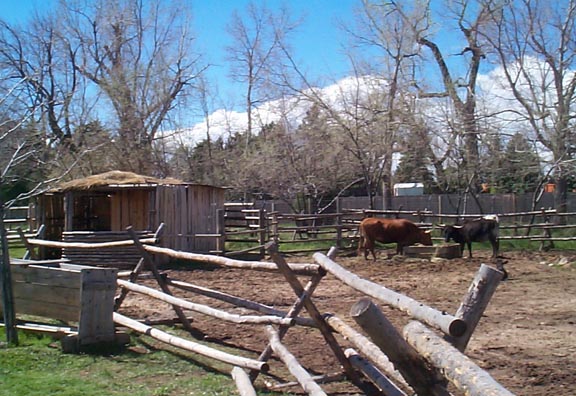 Oxen were very important to 1860s farmers. This was also true of most travelers coming into the Colorado territory. It took around 45 days to travel from the river towns on the Missouri River to settlements on the South Platte River. The kind of oxen favored on this farm are Holstein oxen. A Holstein ox could weigh around 2,800 pounds or more. The yoke used to hitch oxen to a wagon could weigh as much as 150 pounds!

The pig sty is made up of several things. Inside the fence line is a run for the pigs, a feed trough, a water barrel, and an area in which the pigs just wallow around. There is also a shelter. The shelter has two purposes. Below are logs which the pigs can lay on. Above that is a storage rack that is for storing feed. One corner of the shelter faces the direction of the prevailing wind. With a little straw, the pigs can find protection from the cold winter winds. 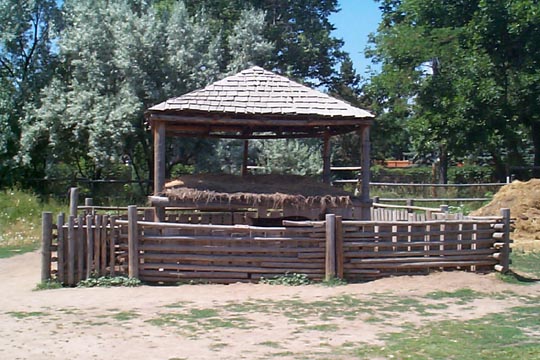 Through the first half of the 19th century, hogs were a more important source of meat for food than were cattle. That would change slowly over time. Raising hogs usually went hand-in-hand with raising corn. While farmers began raising certain kinds of corn in Colorado from the beginning of Anglo settlement, corn growing became much more common after the widespread introduction of irrigation to the region in the 1870s and 1880s.

The log school house on the museum grounds is the first school built in Littleton. The building is used to represent the year 1868. That year was selected because that is the date on the box stove inside the school. The log building was built of either Ponderosa or lodgepole pine logs and was hand hewn. Most of the logs are original to the structure. 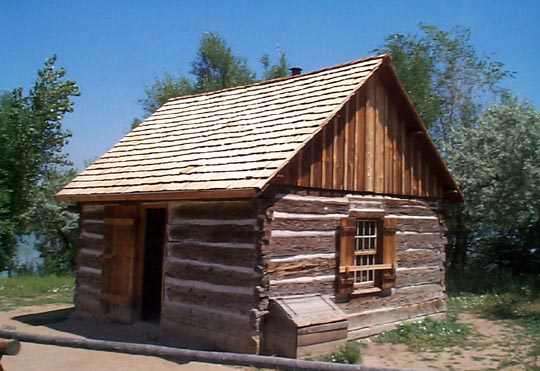 The furnishings include the box stove, desks and benches, textbooks and writing materials for the students, and a desk for the teacher. The building was moved to the museum in 1972 and restored by the museum staff. The roof was replaced as were the windows and doors. People often question the use of shingles on the roof. In fact, shingles were available in Colorado territory in the 1860s. Some were made locally; others were freighted in overland from Missouri.