What do these photos tell you about the type of clothing Coloradans wore? 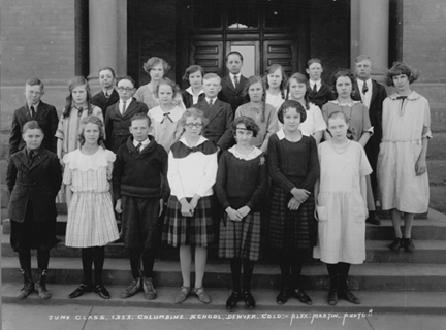 The 1920s saw a major change in the style of girls' clothing. The long skirts and puff sleeves worn in the early 1900s were no longer in fashion. Skirts and dresses came down only to the knees. Girls also were beginning to wear skirts and sweaters. Boys clothing changed more slowly. Knickers were still in style in 1923.

“We didn’t buy ready-made clothes much then. We bought the material, and then there were seamstresses in town. . . . She would always be engaged a week ahead for fall and for spring, and she came and stayed about a week—coming and going—and would make up all the clothes for the next season. . . . You spent most of your time trying things on that week.”

This farmer wearing bib overalls lived near the town of Keota. The photo was taken sometime during the 1930s. 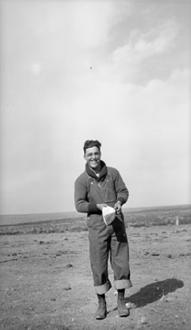 By the 1930s, the kind of clothes farmers and laborers wore to work also was changing. Most workmen of the 1890s wore pants and work shirts, the pants often being held up by suspenders. Forty years later, they were just as likely to wear bib overalls, like the farmer in this photo. But because of the severe economic depression in the 1930s, farmers like this one sometimes had to wear what they could get.

“The big [economic] depression of the [nineteen] thirties is still a nightmare to many people. Stores and shops were forced to close. Poverty and despair reared their ugly heads. Again I became the teacher who ‘begged’ for her pupils. This time it was for wearable, clean clothing. At least once a week in my classroom, after school, I had a ‘If it fits, it’s yours’ party. Children and sometimes parents sorted through neatly folded piles of clean used clothing. It was really a kind of clothing exchange. Grim and bitter as were those years—we did not give way to despair and self pity. . . .”

This photo shows wedding dresses and men's formal wear. The photo probably was taken in the 1930s. 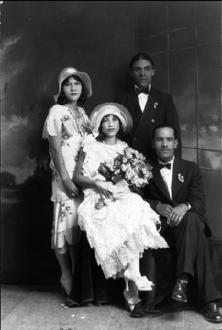 During the 1920s, women's clothing styles changed. They wore shorter dresses, lighter clothing, smaller hats, and shorter sleeves. The wedding dresses worn by the women in this photo reflected those changes. The men's formal wear included dark coats and pants, with white shirts and bow ties.

"A wedding of the Spanish-speaking people is always an occasion for great celebration. The groom must furnish the bridal outfit, and if the bride is never again dressed in silks, she is attired in silks and satins for the wedding. The feast is also furnished by the groom, and as long as the cakes, the wine, and the meat last, the guests stamp happy feet to the guitar and accordion players’ own versions of classical and modern numbers."

Poor People In The Great Depression

This photo was taken during the Great Depression of the 1930s. The children and adults are wearing plain, everyday clothes. 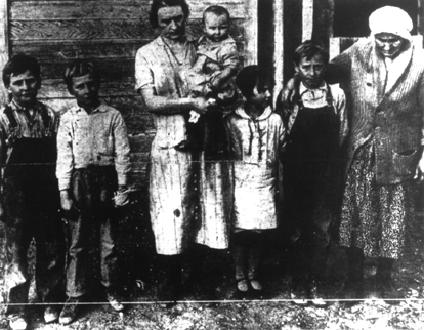 Many people in Colorado were poor during the Great Depression. Plain ordinary dresses were all many women could afford. The boys in this photo are wearing either bib overalls or pants. The girl is wearing a dress that comes to her knees.

"Children from homes in the lower wage brackets were often not able to come to school because of a lack of clothing, especially shoes. Many of the La Junta teachers contributed voluntarily to a clothing fund to keep such children in school, even though some of us were also helping our parents or sisters and brothers."

The women in this 1930s photo are wearing print dresses or skirts and blouses. The boys are wearing knee-length play suits. The girl on the right is wearing a white dress. 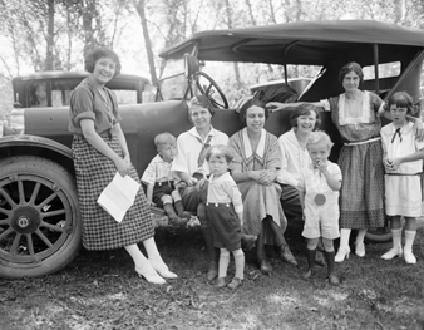 This photo was taken at a Gates Rubber Company picnic sometime during the 1930s.

“Most of our clothes were long skirts. We didn’t dare show our knees, high-top shoes, and mostly skirts and blouses. Otherwise when we were in grade school if we had three dresses we were lucky, and they were mostly pinafores, below the knees for sure. We wore long hair.”