Trappers were the first white Americans to live in what is now called Colorado. White trappers first came into contact with Indians west of the Mississippi River in the mid-1700s. In the early 1800s, their number increased. Still, the Indians of the western plains and Rocky Mountains far outnumbered the trappers. Relations between the trappers and Indians varied. Some tribes were friendly, others were hostile.

Trappers and Indians had many obstacles to overcome. They remembered past encounters that were not always friendly. They spoke very different languages as the photo here indicates. They came from different cultures. Sometimes the trappers and Indians overcame these differences, sometimes not.

Alfred Miller called this drawing "trappers and Indians communicating my signs." Indian tribes living on the plains and in Rocky Mountains spoke many different languages. They communicated with each other through sign language. Sign language helped them trade with one another. As whites ventured into these areas, they had to learn sign language so they could "talk" to the Indians they encountered. Over time, some trappers learned Indian languages. Intermarriage of trappers and Indian women also led trappers to learn the languages of their wives. 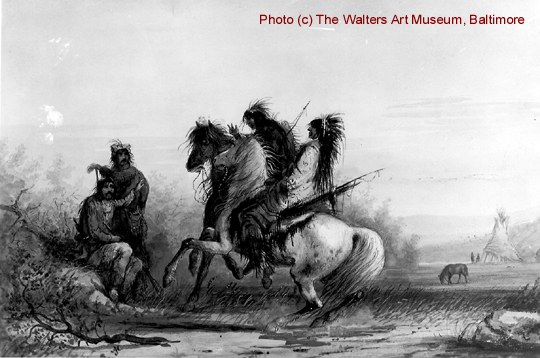 "The Trappers experience much difficulty in acquiring a knowledge of the Indian tongue, and as if the language was not embarrassing enough, its pronunciation is still more puzzling,--the sound proceeding from the throat. It requires them to sojourn for years amongst the tribes to acquire anything like a proficiency, and in the absence of this they resort to signs, the meaning of which they learn readily, and thus hold animated conversations."

Alfred Miller called this drawing "Indian hospitality." Whether Indians were friendly or hostile toward individual trappers depended on many things. Some tribes such as the Pawnee (plains) or the Blackfeet of the northern Rocky Mountains were fiercely hostile to nearly all whites. Other tribes, such as the Cheyenne and Arapahoe, were for the most part friendly to whites. Indians' attitudes toward whites often depended on the personal reputation of a specific trapper. It also often depended upon whether a trapper was friendly that tribe's enemies. Sometimes an Indians' friendliness toward a trapper depended upon what he had to offer in trade. 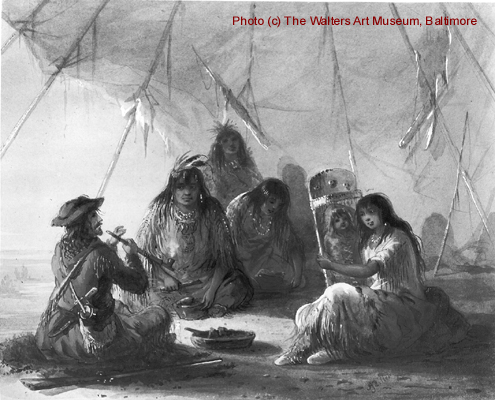 Trading with whites presented Indians with a difficult choice. On one hand, most Indian tribes desired the guns, ammunition, kettles, knives, utensils, blankets and clothing that whites were willing to trade for furs, meat, and horses. On the other hand, most Indians realized that the trappers were encroaching on their traditional hunting grounds. As large numbers of trappers invaded Indian territory, that choice became all the more difficult.

"The sketch represents the interior of a Lodge and the Snake Indian entertaining a free Trapper at a feast. The latter is engaged in recounting [telling of] some adventure to his host, partly by his limited knowledge of the Indian Language, and by signs.
To the right is seated an Indian woman who watches his every movement with intense interest;--she has no doubt often heard of the extravagant generosity of these reckless fellows, and worships him accordingly."

Alfred Miller called this drawing "presents to Indians." Long before white trappers and traders arrives, Indian tribes in the West traded among themselves. This trade involved ceremony and diplomacy as well as the exchange of goods. The white trappers discovered that trade had to be conducted in certain ways or the Indians might take great offense. One of these ways involved giving the Indians presents. 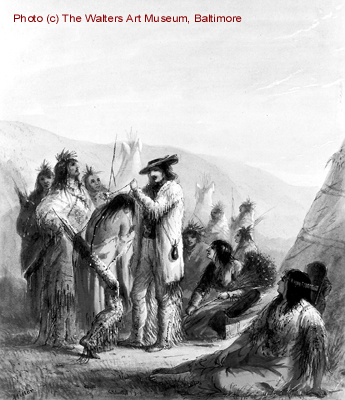 Indian custom required gifts to be exchanged before trading could take place. Gift-giving actually served several purposes. First, giving the Indian gifts showed friendship. Second, valuable gifts gave their recipients higher standing among their own people. Third, gift-giving was another form of non-spoken communication. The trappers and traders had to practice the trading rituals of the Indians tribes with whom they wished to deal. For most Indians, gift-giving was a right. It had to take place.

"The scene here presented transpired within the shadow of the Rocky Mountains, where large bodies of Indians had assembled in order to sell their furs, and to be present at the [feast] that takes place previously. The grim Chiefs, Braves, & Warriors were selected from many, either from some meritorious action, or because they had rendered some services personally useful to some of our band. They attached great importance to the matter, as it gives them a certain status with their people."

Visit To An Indian Camp

Alfred Miller titled this sketch "visit to an Indian camp." The drawing suggests that Indians were a common feature of the trappers' lives. According to historian Richard White, roughly 2,000 trappers were employed in 1832, the height of the fur trade. Of these, fur companies operating from St. Louis employed nearly half. Another 600 worked for the Canadian Hudson Bay Company. The rest were largely free trappers working out of Taos, New Mexico. Almost all of these trappers lived year after year in or near the Rocky Mountains. 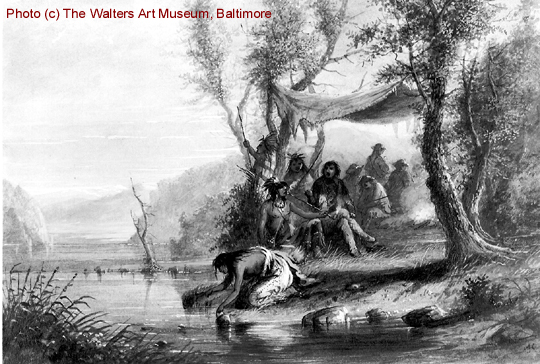 The trappers later told stories about their experiences in the mountains. Most were adventure tales about close calls with wild animals and hostile Indians. They also told stories of visiting--and living in--the camps of friendly Indians. Some trappers, such as Jim Beckwourth, lived for years with a specific tribe. Beckwourth, in fact, became a Crow chief.

"In the progress of our journey we took especial care to see as much as possible of the Indian and his domestic life. In making such visits our men carried their rifles, as an Indian's respect for you is increased thereby, and indeed our safety depends often upon it. Whenever we found friendly Indians encamped, the inevitable pipe was brought forward and passed around, each taking two or three whiffs,--this not only proclaims a welcome, but is also a bond of amity [friendliness], and also their mode of expressing good will towards you."

Alfred Miller called this drawing "The Trapper's Bride." It suggests that many white trappers and traders married Indian women. Evidence suggests that trappers in large did marry Indian wives. In addition, following Indian custom, the mountaineers could actually buy an Indian wife. 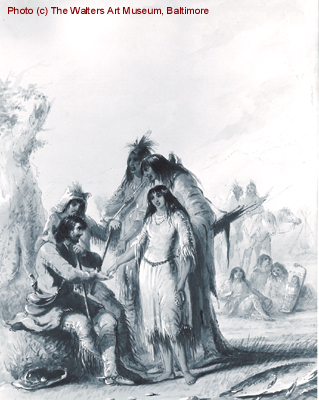 Historian William Swagerty estimates that nearly 40 percent of the trappers who married for the first time married Indian wives. Another 10 percent married women who were part white and part Indian. In addition, 20 percent of the trappers working out of Santa Fe and Taos took wives of Spanish/Mexican descent. Swagerty estimated that most unmarried trappers found a wife within a year or two of reaching the mountains. The average trapper's marriage lasted 15 years and resulted in an average of three children.

"The scene represents a Trapper taking a wife, or purchasing one. The prices vary in accordance with circumstances. He (the trapper) is seated with his friend, to the left of the sketch, his hand extended to his promised wife, supported by her father and accompanied by a chief, who hold the calumet, an article indispensable in all grand ceremonies. The price of acquisition, in this case, was $600 paid for in the legal tender [money] of this region: [that is] Guns, $100 each, Blankets $40 each, Red Flannel $20 pr. yard, Alcohold $64 pr. Gal., Tobacco, Beads, &c. at corresponding rates."

Alfred Miller called this sketch "Interior of Fort Laramie." The original trading post was built in 1834 where the Laramie River enters the North Platte River, in what is now southern Wyoming. This location was also on an ancient Indian trail that passed from south to north along the front range of the Rocky Mountains. In 1841, the American Fur Company rebuilt the fort using adobe. Miller's drawing shows that diverse people came to trade at the fort. 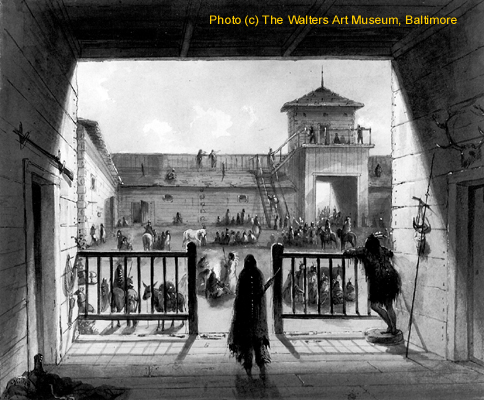 The American Fur Company renamed Fort William to Fort John, but the for was popularly known as Fort Laramie. From its building in 1834, Fort Laramie became the center for trade with such plains Indian tribes as the Oglala Sioux, Cheyenne, and Arapahoe. In the 1840s and 1850s, Fort Laramie also became an important stop on what became the Oregon Trail. This fort, similar to Bent's Fort on the Arkansas River, were truly crossroads of many cultures.

"The view is from the great entrance looking West, and embraces more than half the Court, or area. When this space is filled with Indians and Traders as it is at slated periods, the scene is lively and interesting. They gather here from all quarters. From the Gila [River] at the South, the Red River at the North, and the Columbia River West, each has its quota and representatives."

Alfred Miller called this drawing "caravan taking to water." His primary point was that fur trappers and traders tried as far as possible to avoid potential problems with Indians. The memoirs and other writings of mountain men are full of stories that support Miller's view. The mountain men were constantly on the alert for signs of Indians' presence in an area they were trapping or through which they were traveling. They tried avoid contact, especially when their numbers were small in relation to the estimated number of Indians. 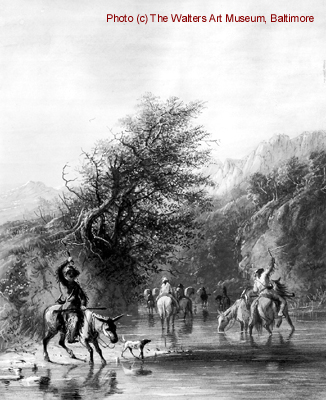 "The Trappers are here being pursued by Indians, or as they style it--'the varmints are on their tracks.'     To baffle them and throw them out, they use all manner of stratagems,--forced marches, at night, lighting no camp fires, and living on dried meat . . . and lastly entering streams or rivers and fording them up or down as the [demands] of the case might require,--for when they are transporting valuable packages of goods, their instructions are to avoid all collisions with the savages, for many reasons,--one of the most prominent being that they must lose either by victory or defeat."

Alfred Miller called this sketch "Threatened Attack--approach of a large body of Indians." The drawing suggests that some tribes were not afraid of a large party of trappers and traders. Indian tribes' attitudes toward the trappers and traders ranged from constantly hostile (Blackfeet and Pawnee) to the frequently friendly (Crow and Cheyenne). However, a tribe's attitude toward trappers and traders depended upon what advantages it might gain by friendly relations with them. Trade with the whites, for example, might be an advantage for a tribe that was smaller and relatively powerless in comparison with a larger and stronger tribe. Indian-white relations often depended upon how various Indian tribes got along with one another. 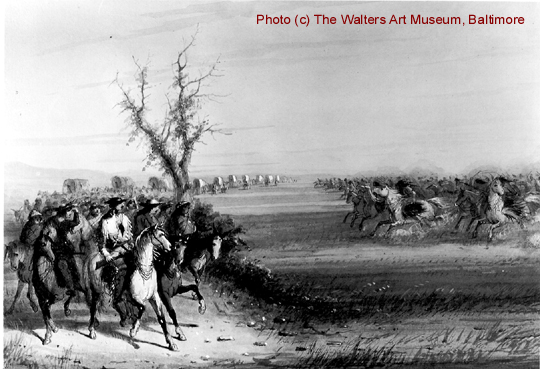 Individual Indians from a friendly tribe could still pose dangers for the mountain men. Even friendly Indians stole their horses. Horses were among the Indians' most valuable of possessions; indeed, they were essential for these Indians' survival. They developed horse-stealing into a fine art. The trappers' and traders' horses were often viewed as easy targets for the Indians. These Indians also valued trappers' other equipment (traps and knives) and the furs they had trapped. The trappers' memoirs and tales are full of stories in which Indians found and stole caches of furs or equipment left in a camp unattended.

"On this eventful morning our caravan, pursuing as usual the even tenor of its way, we descried one of our hunters returning to the camp at full gallop. His speech was to the purpose, 'Injins all about--thar will be some raising of h'ar [hair],--as sure as shootin.' On his heels followed others confirming this. At this juncture, it would have been a good study . . . to watch the [faces] of the different men. The staid indifference of the old trappers ready for any emergency, the greenhorns . . . pale about the gills and quite chopfallen [worried and perhaps ashamed]. No boasting now!"