What do these photos tell you about the different types of food Coloradans ate?

These girls won a trophy and ribbons for the canned fruit and vegetables they exhibited at the Montrose 4-H Club Fair. The photo was taken about 1936. 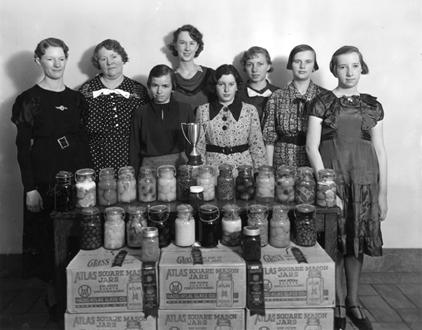 People who lived in rural areas and small towns in the 1930s still raised much of their own food. An organization called the 4-H Club helped young people learn farming, gardening, and home-making skills. They exhibited their work every summer at fairs. Many young people today also belong to 4-H clubs.

“Well, actually, as far as clubs, after we had over 200 people in Rangely [about 1939]—before that, why Mrs. Purdy used to have a little literary club that met, oh, maybe once a week . . . and in wintertime, why maybe once a month. . . . But when you live out on a ranch and you don’t have any transportation in [to town], other than a horse, why, I never was involved with any of the women’s clubs. Then after I moved to town my children were in school, so I became involved in the school activities with the children. I was 4-H leader for 10 years.”

These vegetables were on display at the Logan County Fair in Sterling. The photo was taken about 1964. 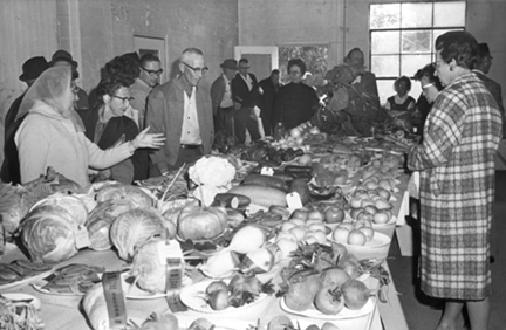 Adults as well as children competed for awards for the fruit and vegetables they grew. The food displayed at this county fair includes cabbages, beets, tomatoes, onions, turnips, and cauliflower. County fairs continue to be popular throughout Colorado.

This is a US Army food or chow line. The photo was taken at Camp Hale (near Leadville) about 1943. The soldiers in this photo belonged to the Tenth Mountain Division, which trained at Camp Hale. 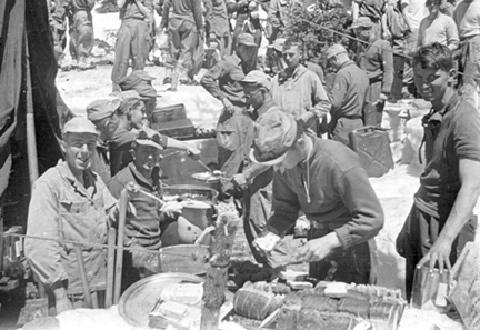 By the 1940's, many people depended on farmers to raise food for them. The soldiers at this Army camp near Leadville lived on food raised by farmers in Colorado and elsewhere.

These children are eating lunch in the school cafeteria at Lincoln Elementary School in Sterling. The photo was taken about 1940. 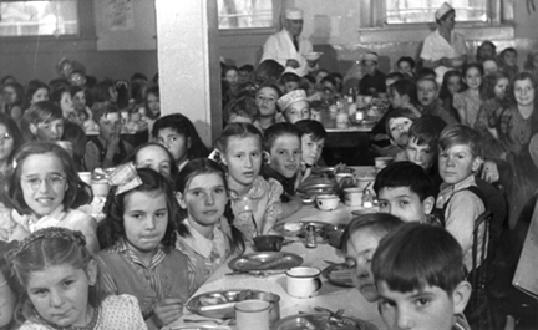 By the 1940s, many children in Colorado ate meals that were not prepared at home. Sterling and other Colorado cities had school hot-lunch programs. Children who attended school in small towns and rural areas still had to bring their own lunch.

"Two children from such a [poor] family arrived each day carrying shiny half-gallon honey pails for lunch baskets. When most of us gathered for lunch like one big happy family, these two asked permission to go off by themselves.... The truth finally became evident. Those shiny lunch pails contained NO FOOD. Pride had kept the children from confiding in me.... A hot lunch program seemed the answer and soon the official wheels were turning. Government surplus foods were available to schools such as ours."

This photo was taken in front of the Red Onion cafe in Aspen about 1950. 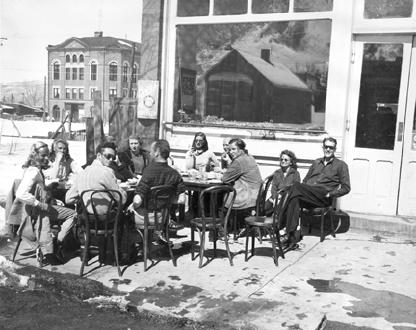 People living in cities or visiting resort towns like Aspen often had meals in restaurants. Sitting at outdoor tables was popular in resort towns, even during the winter.

“New tourist attractions gradually are being added to keep visitors comfortable and occupied—and spending—while they enjoy the mountains and the climate. Dude ranches are on the increase. Motor courts are growing more elaborate. The historic old mining town of Aspen has been revived as a ski resort, complete with . . . movie stars, and now it is getting a theater and a folk ballad center as summer substitutes for snow.”