What do these photos tell you about the way their home interiors looked like?

This is a kitchen in a house in Central City. The photo was taken in 1960, but the kitchen dates from about 1900. 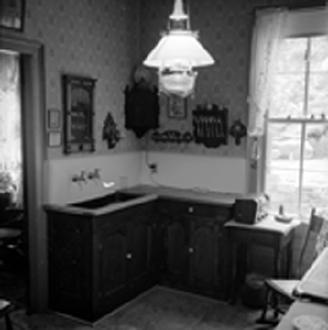 In the early 1900s, kitchens were one of the most important rooms in the house. The woman of the house spent much of her time there. The photo shows the kitchen sink and work counter. The room was lighted by an electric lamp that hung from the ceiling.

This is the sitting room in the Bowman-White house in Georgetown. The photo was taken about 1945. 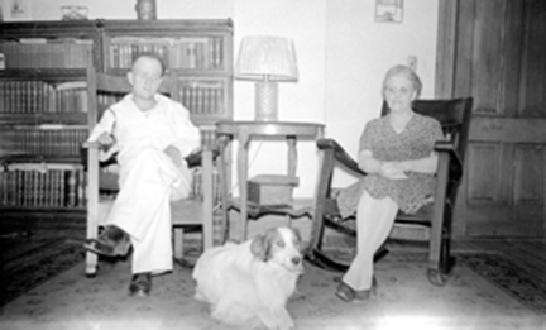 The sitting or living room was another important space in houses of the first half of the 1900s. People spent many of their evenings sitting beside a lamp table like the one in this photo talking and reading. Today, people spend more time in the family room watching television.

This is the living room of the Muriel Sibell Wolle house in Boulder. The room is decorated for Christmas. 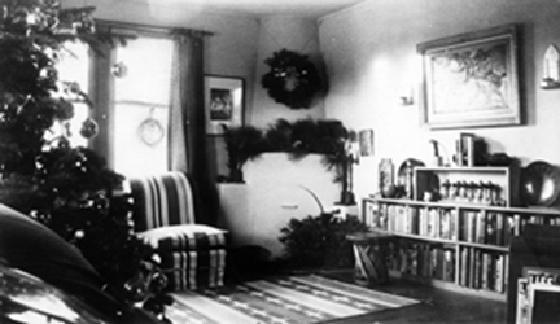 This photo shows a well-furnished living room. It has a chair, a bookcase, and an Indian rug on the floor. The room is decorated with pictures, wall candles, and Christmas decorations.

This is the dining room in a house in Idaho Springs. The photo was taken through an archway from the living room. It is furnished with a table, chairs, and a buffet table against the wall. It is decorated with wallpaper, a mirror, candlesticks, and flowers on the table. 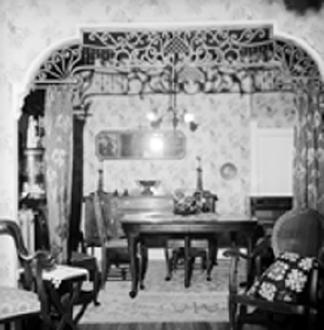 The dining room was an important room in many houses during the first half of the twentieth century. Middle class families usually gathered there for dinner each evening. Dining rooms then were not just places for special meals and dinner parties.

This is a bedroom in a house in Palmer Lake. The photo probably was taken during the 1940s. 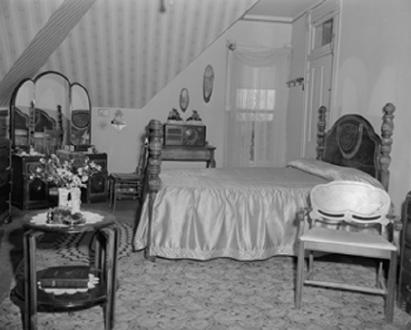 This is a well-furnished bedroom from the mid-1900s. It has a four-poster bed with a satin bedspread, a vanity table with a mirror, and two other tables. The table against the wall has a radio on it.

This is a barracks room at the Amache Center near Granada. It shows a Japanese-American family that was forced to move there from California. The photo was taken in December 1942.

The barracks rooms in which Japanese-Americans lived at Amache Center were neither large nor well furnished. This photo shows Mrs. Ninomiya and her two sons. This bedroom-living room is furnished with a folding card table, a folding chair, bunk beds, and a dressing table and stool made from scrap wood.

“It was crowded in my family’s room. We had seven people so we got the end unit. Of course, there wasn’t enough room for seven beds in the room, so we had to share beds. My mother and two younger brothers slept in a double bed we made and the three older boys slept in another double bed. My father got a single bed to himself.”