Bison (or Buffalo) were important to Indians tribes living on or near the plains. For these Indians the bison was a "walking grocery store." When Americans began to move onto the plains in the early 1800s, the bison became even more important. First, bison was a main source of food for both groups. Second, Americans valued bison robes and hides. These items became important trade goods between the Indians and Americans. So great was the Americans' demand for these items that buffalo hunting vastly increased and the numbers of buffalo soon began to decline.

The artist who made this drawing shows the plains covered with hundreds of bison. This was the way the plains must have looked to Indians and the first whites who traveled the plains in the early 1800s. Before the Europeans came to the western hemisphere, Indians living in North America hunted buffalo. But Indians traveled only on foot and buffalo were hard to hunt and kill. That was one reason why there were so many buffalo in North America. With the horses brought by Europeans, Indians became much better buffalo hunters.

The Spanish explorer Cabeza de Vaca was the first European to see a buffalo on the plains. The year was 1535. The place was the plains region of North America. From that time until the middle of the 1800s, most travelers who entered the Great Plains told of the thousands of buffalo they saw.

"In the afternoon [we] discovered the north side of the [Arkansas] river to be covered with animals; which, when we came to them proved to be buffalo cows and calves. I do not think it an exaggeration to say there were 3,000 in one view. It is worthy of remark, that in all the extent of country yet crossed, we never saw one cow, and that now the face of the earth appeared to be covered with them."

The Range Of The Buffalo

The map to the right shows where bison lived (also known as their range) at two points in time. The pink area on the map shows their range in the year 1500. That year was about the time that Europeans first arrived in the western hemisphere. The blue area shows where bison lived in 1870. Between these two points in time, the range of the bison decreased greatly. The number of bison also declined greatly. 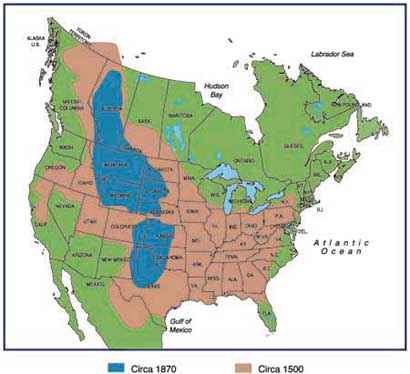 Naturalists have estimated that at their peak, between 50 and 75 million bison lived in North America. By the year 1800, bison had disappeared from east of the Mississippi River. In that same year, experts think that around 30 million bison lived west of the Mississippi. Less than 100 years later, in 1889, there were only 259 bison left in North America.

"It is a singular fact within the last two years the prairies, extending from the mountains to a hundred miles or more down the Arkansa [River], have been entirely abandoned by the buffalo. Indeed, in crossing from the settlements of New Mexico, the boundary of their former range is marked by skulls and bones, which appear fresher as the traveler advances westward and towards the waters of the Platte. . . . With the exception of the Bayou Salado [Colorado's south park], one of their favorite pastures, they are now rarely met with in large bands on the upper waters of the Arkansa. . . ."

This drawing depicts a "family" of buffalo. It shows a male (the largest of the three), a female, and a calf. Female bison do not breed until they are three years old. The breeding season for bison is from the first of July to the first of October. Calves are usually born in April, May, and June. Bison cows usually bear only one calf per birth, but twins have sometimes been born. Calves stay with their mothers until they are about one year old. The mid-size bison in the photo is a yearling (that is, it is one year old).

Bison live in bands made up of biologically related animals. Females usually live with the band for as long as they live. Young males, however, are usually forced away from the band when they are one year old. The bands follow the lead of the dominant bison bull. Depending upon the season and weather, each band moved as a group trying to find enough grass and water. At other times, many bands came together to become herds of many thousands of bison.

"The [buffalo] cow seems to possess scarcely a trace of maternal instinct, and when frightened, will abandon and run away from her calf without the slightest hesitation. . . . When the calves are young they are always kept in the center of each small herd, while the bulls dispose themselves on the outside."

A Band Of Bison

This drawing depicts a small band of bison. For a long time, naturalists thought that bison migrated in large herds. They also thought that these migrations followed definite seasonal patterns. Their theory was that buffalo moved south for milder weather in winter; they then moved toward the north in spring and early summer. Scientists now believe that bison migrations were largely random movements of small bands. Essentially, bison spent most of their time chasing grass, their main food supply.

During mild winters, bison remained on the central and northern plains. In more severe winters, bison did one of two things. They would seek milder weather to the south, or they would seek shelter along plains waterways. In early spring, bison would feed on the grasses along the region's streams. These grasses were the first to sprout in spring. In early summer, bison would move away from the streams toward the highlands where the grasses sprouted later. In summer, these places had abundant and very nutritious buffalo grass.

"Early in spring, as soon as the dry and apparently desert prairie had begun to change its coat of dingy brown to one of palest green, the horizon would begin to be dotted with buffalo, single or in groups of two or three, forerunners of the coming herd. Thicker and thicker and in larger groups they come, until by the time the grass is well up the whole vast landscape appears a mass of buffalo, some individuals feeding, others standing, others lying down, but the herd moving slowly . . . ."

A Herd Of Buffalo

This photograph shows a small herd of bison on the plains in the late 1800s. Indian tribes such as Cheyenne, Arapaho, and Sioux decided to move to the plains in part because of the vast herds of buffalo that lived there. Even though the buffalo became the Indians' "walking grocery store," the number of Indians was small and the number of buffalo was huge. So when Euro-Americans began to enter the plains, vast herds of buffalo still lived there. In the next 50 or 60 years, however, these vast herds were disappearing. 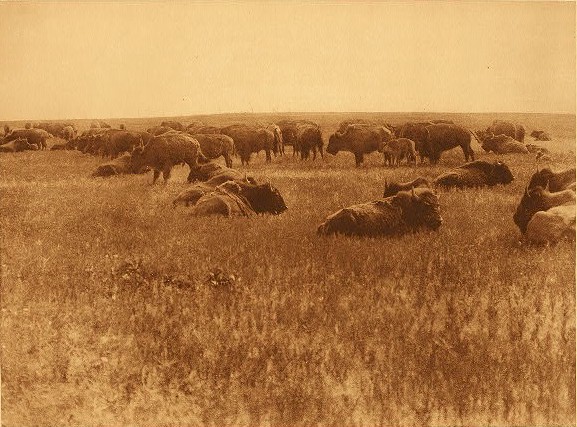 Because the disappearance of buffalo coincided with the appearance of Euro-Americans on the plains, many people assumed that one thing caused the other. That is, many thought that white hunters caused the near-extinction of the buffalo. Scholars now think the story is much more complicated. There is no doubt that white hunters killed millions of bison in the 1860s and 1870s. But the decline in the buffalo population began long before this time.

"We were now, day after day, passing through countless herds of buffalo. I could scarcely form an estimate of the numbers within the range of sight at the same instant, but some idea may be formed of them by mentioning, that one day, passing along a ridge of upland prairie at least thirty miles in length, and from which a view extended about eight miles on each side of a slightly rolling plain, not a patch of grass ten yards square could be seen, so dense was the living mass that covered the country in every direction."

Hunting On The Plains

This painting shows a white hunter chasing a buffalo. White hunters had a big impact on the decline in the number of bison on the plains. But the impact of whites on the bison was more complicated that this. For one thing, whites traded manufactured goods to the Indians for buffalo robes. The Indians were good hunters and they traded buffalo robes for guns, ammunition, knives and other utensils, blankets, and many other things. Indians liked these goods, so they began producing thousands of buffalo robes so they could trade for them. 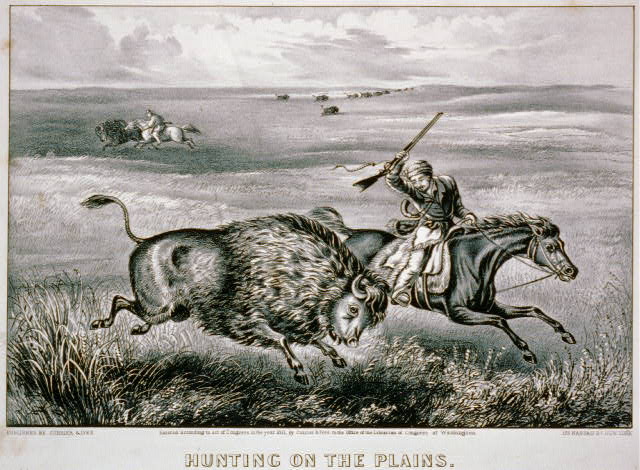 Another important factor was the effect of whites on the bison's environment. For one thing, whites' livestock (oxen, cattle, and mules) carried diseases that began to kill bison. For another, white travelers had a big impact on an important bison "micro-environment." That micro-environment was along the streams and rivers of the plains. On the arid plains, these small environments were very important for both Indians and animals. It was along streams and rivers where the first grasses sprouted in spring. It was along these bodies of water that whites traveled as they crossed the plains. The whites' horses, mules, and oxen ate much of the grass in these areas.

"Some idea of the [vast] slaughter of these animals may be formed, by mentioning the fact that upwards of one hundred thousand buffalo robes find their way annually into the United States and Canada; and these are the skins of cows alone, the bull's hide being so thick that it is never dressed. Besides this, the Indians kill a certain number for their own use, excluding those whose meat they require; and the reckless slaughter of buffalo by parties of white men, emigrants to the Columbia, California, and elsewhere, leaving, as they proceed on their journey, thousands of untouched carcasses on the trail, swells the aggregate of this wholesale destruction to an enormous amount."

Where The Millions Have Gone

This drawing, titled "Where the Millions Have Gone," depicts what had happened to the vast buffalo herds by the end of the 1800s. Hunting, trade, diseases, and environmental change all had negative effects on the plains bison population. Both whites and Indians recognized that the bison were disappearing already in the late 1840s and 1850s. These problems became even worse in the 1860s and 1870s.

By the mid-1880s, only a handful of buffalo survived. The impact was much greater on plains Indians than on any other human group. As the bison declined in numbers, the Indians who had depended on the bison for most of their needs (whether through trade or direct use) became more and more dependent on the federal government for food and clothing.

"Notwithstanding the great and wanton destruction of the buffalo, many years must elapse before this lordly animal become extinct. In spite of their numerous enemies, they still exist in countless numbers, and, could any steps be taken to protect them, as is done in respect of other game, they would ever remain the life and ornament of the boundless prairies, and afford ample and never-failing provision to the travelers over these otherwise desert plains."