In 1909, the city of Denver built Fire Station No. 1 to help protect the business district. The first floor was used for horse stalls and to park fire wagons. Later, the stalls and wagons were removed to make room for modern-day fire trucks. The second floor included living, sleeping and eating areas for the firemen. This station served the city for over 60 years. 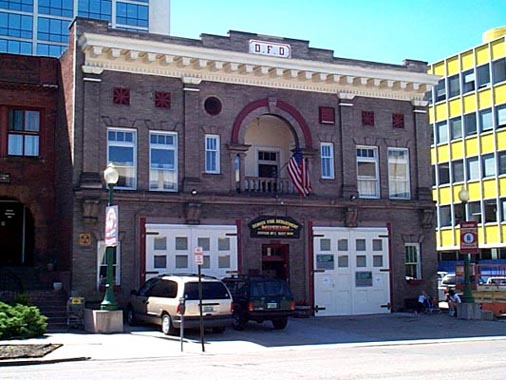 When the city built Fire Station No. 1, it hired an architect to design an attractive building. This station, designed by Glen W. Huntington, includes several elements of the classical style of architecture. (Buildings in the classical style remind one of temples constructed by the ancient Greeks.) The classical elements in this fire station include the columns that frame the windows on the second floor. The long cornice above the columns also gives the building a classical look. The city preserved this building after it was no longer needed as a fire station by turning it into a museum.

In 1974, the fire fighters moved to a new building. Four years later, the old Fire Station No. 1 building became the Denver Firefighters' Museum. Visitors to the museum can see early fire trucks and fire-fighting equipment on display.

The Denver Athletic Club was built in 1889 as a men’s club. It provided exercise equipment and rooms where men could hold meetings and have lunch. Its members included many of Denver’s business and civic leaders. 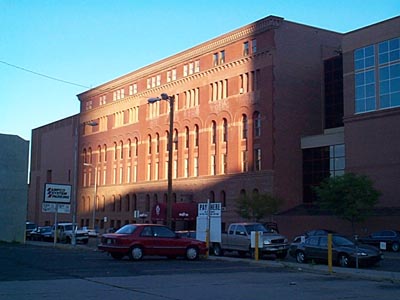 The center part of the Denver Athletic Club building, which has pairs of arched windows, was built in 1889. The first two floors along the front of the building are faced with pink sandstone. The upper four stories are made of brick. Constructing buildings of both brick and stone was common in Denver during the late 1800s. The plain brick structures on both sides are additions that were built in 1973 and 1984. The additions helped preserve the original building by providing the club with more space as its membership grew.

This building was constructed in 1890 for Denver's Masonic Order. The Masons are a men's organization. They had their offices in this building and held meetings there. The first-story of the building also leased space to retail businesses. 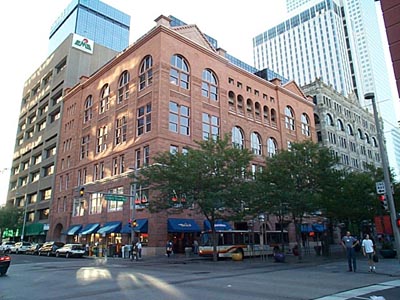 Masonic temples (as the buildings in which Masons meet are called) are often fine buildings designed by well-known architects. This building was designed by Frank E. Edbrooke, one of Denver’s leading architects. He designed Denver’s Masonic Temple building in the Romanesque style. Arched windows were an important feature of that style.

This building caught fire in 1984 and nearly burned down. Only the walls were left standing. The owners of the building decided to preserve what was left of the building. They rebuilt it using a strong steel frame inside to support the original walls. 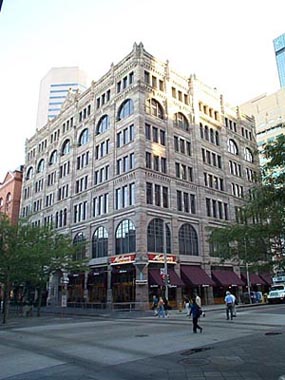 The Kittredge Building is one of the finest examples of the Romanesque style of architecture so popular in Denver in the late 1800s. Arched windows were an important feature of that style. This building has large arched windows on the 2nd floor that flooded the interior with sunlight. This feature is repeated on the 6th floor, with smaller arched windows. The building also has an arched entryway facing Glenarm Place, which can be seen on the left side of the photo.

The Paramount Theater opened in 1930 as Denver’s newest “Movie Palace.” It was lavishly decorated inside and out. The front of the theater featured decorated stone work and moldings. Inside were large murals painted on silk cloth, lights in the ceiling that twinkled like stars, and huge glass chandeliers. Fine theaters like the Paramount made going to the movies a very special event. 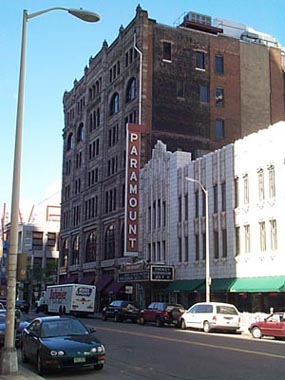 The Paramount Theater building is a fine example of the Art Deco style of architecture. This style, which was borrowed from France in the 1920s, emphasized artistic decorations and geometric designs. It was often used in new theaters built in the 1920s and 1930s. A group of Denverites who call themselves Friends of the Paramount have worked hard and raised a great deal of money to preserve and restore this theater building. It is the last remaining theater in Denver from the period of the 1920s and 1930s.

In 1910, the U.S. government began building a new Post Office in Denver. The building also would provide space for a federal district court, government offices, and a law library. When it was finished six years later, Denver’s new government building covered an entire city block. The building is now the Byron White Federal Courthouse. It is no longer used as a Post Office. 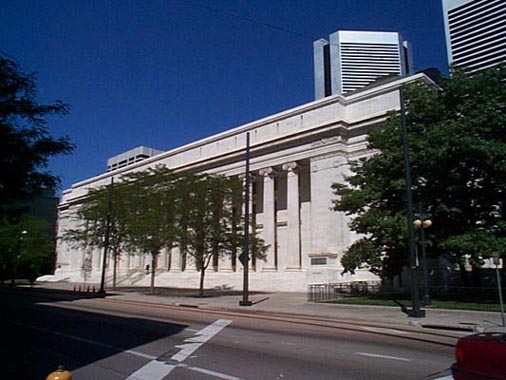 In the early 1900s, the US government built many Classical Revival style buildings. This building is a good example of that style borrowed from ancient Greece. On the Stout Street side, the building has 16 huge columns that rise 3 stories high. The columns help make this white marble building look more like a Greek temple than a modern office building.

This building has gone through many changes. It began in 1889 as a 3-story red brick store building. Its big glass-plate show windows made it one of Denver's finest store buildings at that time. The Denver Dry Goods Company added a 4th floor in 1898. A second addition in 1906 extended the building down the whole length of the block (the higher building in the rear). The building was one of Denver's biggest department stores until 1987, when it closed. The building was remodeled and reopened in 1994 to house shops and offices. 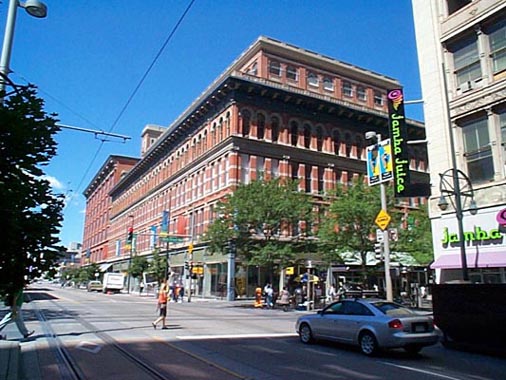 The Denver Dry Goods Company was one of Denver's pioneer department stores. The building reminds us that at one time all of Denver's big retail stores were located downtown. Stores that outgrew their buildings did not move to the suburbs. They moved to larger downtown buildings or the building was expanded. This building also is important because it was designed by Frank E. Edbrooke, a famous Denver architect. He built many buildings in downtown Denver during the 1880s and 1890s, including the Brown Palace Hotel.

By the 1920s, the Neusteter Company was the most fashionable women’s clothing store in Denver. But it had outgrown the wooden frame building it occupied on 16th Street. It hired Denver architects William and Arthur Fisher to design the new building shown below. When it opened in 1924, the Neusteter building was Denver’s most modern department store. It also was the first of a chain of Neusteter women’s wear stores in Colorado. Neusteter’s remained in business until 1985, when its stores finally closed. The building now has shops on the ground floor with apartments in the floors above. 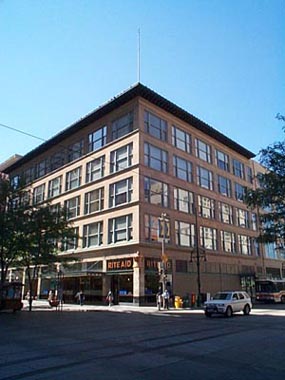 The Neusteter building is a good example of the “commercial” style of architecture popular in the early 1900s. Large windows of the Neusteter building are an important part of this style. They are often called Chicago-type windows because they first appeared on store buildings in that city. Large windows on the ground floor were ideal for displaying goods. The windows on the upper floors provided good day-time lighting throughout the building.

This building was constructed in 1910 for the Denver Gas and Electric Company. The company that provided gas and electricity for Denver used it for many years as office space. Although the company no longer exists, the building is still used for offices. 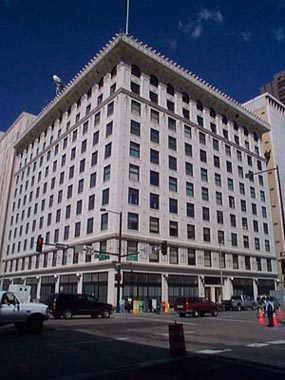 In 1908, the growing city of Denver needed a larger building for holding concerts, operas, plays, and conventions. It met this need by building the Denver Municipal Auditorium, which was large enough to seat 12,000 people. This auditorium still serves Denver as a center of the performing arts and musical entertainment. 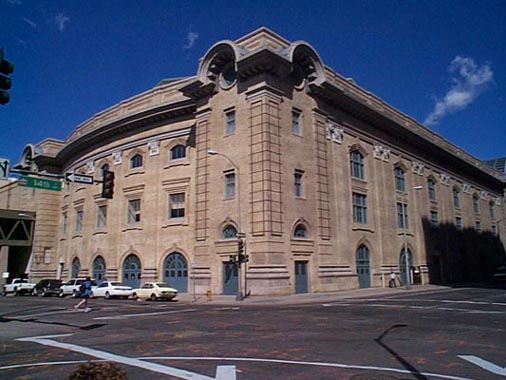 When it opened in 1908, the Denver Municipal Auditorium was one of the largest auditoriums in the United States. The only one larger than it was Madison Square Garden in New York City. The first event held in the building was the 1908 Democratic Party's National Convention. It selected William Jennings Bryan as the Democratic Party's candidate for president that year.

By the 1940s, Denver was again outgrowing its Municipal Auditorium. Some people wanted to tear the Auditorium down and build a new one. Instead, the city remodeled it (in the 1950s) and built other theater buildings next to it (in the 1980s). Together these buildings now make up the Denver Center for the Performing Arts. The Center also includes a large parking structure, which is connected to the Auditorium by a high glass arcade.

In 1911, the Denver Tramway Company built this 8-story building. This company, which ran Denver's electric streetcar system, used it as its office building. Attached to the office tower was a 2-story car barn where the streetcars were parked when not in use. In later years the Tramway Company ran Denver's city bus system. In 1956, the company sold the building to the University of Colorado for classroom and office space. The building is now used for offices as a luxury hotel. 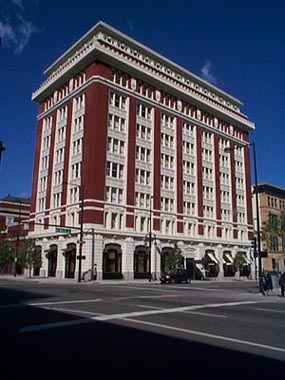 In 1911, the Denver Tramway Company built this 8-story building. This company, which ran Denver's electric streetcar system, used it as its office building. Attached to the office tower was a 2-story car barn where the streetcars were parked when not in use. In later years the Tramway Company ran Denver's city bus system. In 1956, the company sold the building to the University of Colorado for classroom and office space. The building is now used for offices as a luxury hotel.

The tower was built in 1911 as part of the Daniels and Fisher department store. It was patterned after the bell tower in St. Mark's Square in Venice, Italy, which was a popular tourist attraction. The 5-story department store to which it was attached was torn down years ago. The 21-story tower was left standing. Sixteen of the tower’s floors are now used for offices. 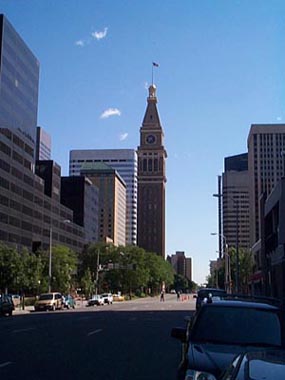 The "D&F Tower," as it is sometimes called, was Denver's first skyscraper. It rises 393 feet above the street. Near the top of the tower is a huge clock with faces on all four sides. The hands on the clock are 6 feet long.

Today the Daniels and Fisher tower is all that remains of one of Denver's great department stores. The people of Denver became so fond of the tower that they made it an official landmark in 1969. This helped save the tower when the the rest of the store building was torn down.

The Denver City Cable Railway Company ran cable cars on Denver's streets. Cable cars were powered by a steel cable that ran beneath the street. The cars were attached to the cable by a clamp that could be set to make the car go or released to make it stop. This building housed the steam-driven machine that ran the cable, and the company's offices. The streetcars were kept there. After the cable cars stopped running in 1900, the building was used as an indoor parking lot and garage for automobiles. Since 1974, it has housed a restaurant on the ground floor and offices on the second floor. 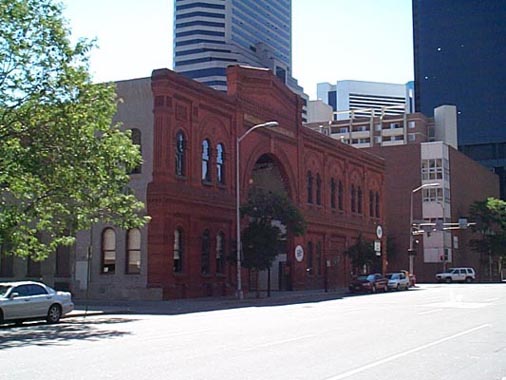 By 1974, the Cable Railway Company building seemed to have outlived its usefulness. It was about to be torn down. The building was saved by people who saw it as a fine example of Romanesque architecture. The brick arches over the windows and main entrance are Romanesque in style. The trim along the front also makes this building a fine example of decorative brick work. The building was restored in 1974 by James A. Sudler, a Denver architect who moved his office into the building.