The history of Denver City began on this corner in 1858. General William Larimer built a log cabin which he sold the next year for $400. The buyer was George Clayton, who replaced the log cabin with a frame structure. In 1882, Clayton built the building you see. It housed the McNamara Dry Goods Company. Because of the granite used on the outside walls, the building became known as the "Granite Building." In 1887, offices occupied the building. By 1910, the building became a hotel. 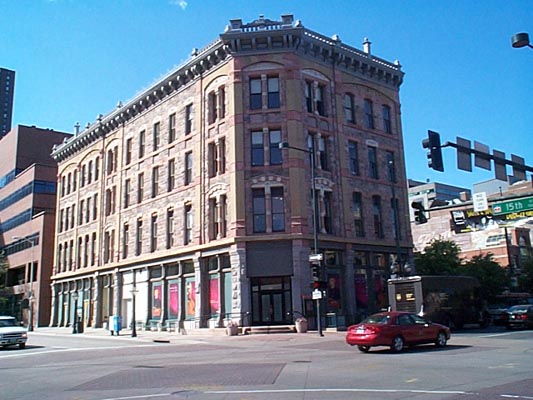 During Larimer Square's restoration in the 1960s, the Granite/Clayton Building also experienced a renewal. There are several features that make this building unusual. First is its granite covering material. Second, the top edges of the building (known as a cornice) are unusual and interesting. Third, vertical columns are made of cast iron, which are decorative when not covered by the granite. Fourth, the building has a number of stained glass windows. Finally, the front corner of the building, which has recessed bay doors and windows on the second through third floors, is also unusual.

The first half of this three-story building was constructed in 1890. The owners of the building were the Buerger brothers. Their first business was in barber supplies. Before long, the brothers got into many other kinds of businesses. These included investments and real estate. In the 1920s, the brothers opened a hotel in this building. 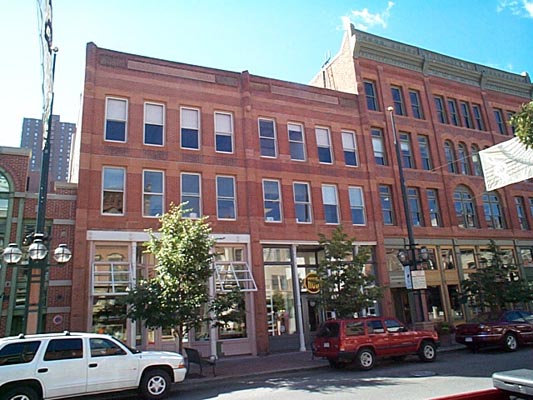 The first half (to the left in the photo) of the building was built in 1890. The second half was built in 1908. You can see that the second part of the building was decorated to conform to the look of the first half. The horizontal lines of the roof line and upper story windows are quite similar. So, too, is the brick used in construction. The doorways were quite different in design and look.

Roath's Pioneer Jewelry Store was built on this site in 1860. This and another building were torn down in 1880. The massive red brick Sussex building replaced them both on this site. Offices now occupy the upper floors. The bottom floors host a variety of arts and crafts stores and restaurants. The Sussex walkway provides access to the rear of the building.

The Sussex Building is made of red brick. The brick work around the windows and composing the vertical columns is decorative. It also lends a solid, massive feel to the building. The round arches of the second- and third-story windows illustrates a Romanesque architectural style.

In mid-1859, Count Henri Murat opened a barbershop on this site. George Kettle, a butcher, built the building named after him on this location in 1873. He wedged his building in between two other buildings that had already been built. One interesting thing about this building is that it had no side walls of its own. Rather, it used the side walls of the buildings that were already there. 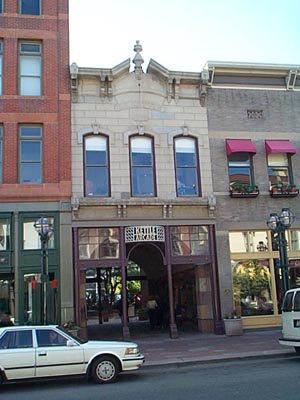 Not long after it was built, Mr. Kettle left his building. Kettle himself went into the real estate business. After Kettle left it, the building housed many different businesses. At various times it served as the home for an employment agency, a knick-knack store, a newspaper office, and a steam dye works. In terms of design, the building is most notable for its simulated stone facing and the decorative top (cornice) of the building.

A cluster of small one-story wood and brick buildings preceded the Wooten building on this site. These buildings were occupied by many small shops. These included dry- goods, law offices, paint and carpentry, photo, fruit and produce, and cafes and saloons. 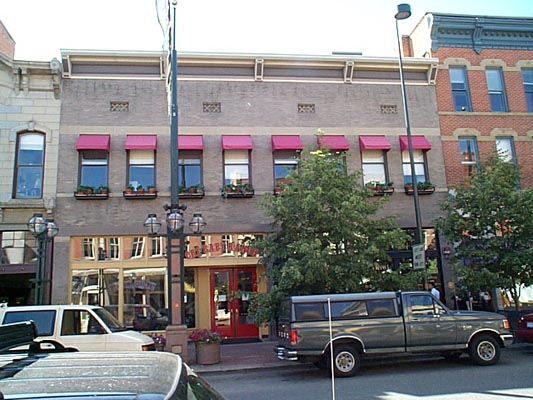 The current occupants of the Wooten building are similar in scale and type to the buildings that originally occupied this location. The gray brick face of the building was added in the early 1900s. This facing supplies a design unity to the various shops that occupy the building.

This building was originally a cigar factory. After that, it housed an ink manufacturing company. At about the turn of the 20th century it was the home of a barber shop. By the 1920s, the upper floors provided rooms for lodgers. These went by the names of the Parr House and then The Irwin. At this time, the downstairs was a hang-out for plumbers and painters. 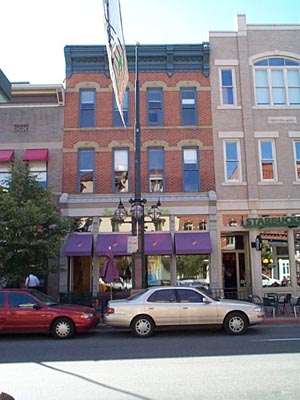 The Barnum building was built in the 1880s. It is a red brick, three-story building. Its fine appearance is partly the result of fancy stone trim around and above the building's windows.

A Victorian house and another building occupied this site until the late 1870s. At that time another structure replaced the first two buildings. The new structure became a saloon. When selling alcoholic beverages was declared illegal during prohibition (1920-1933), the first floor of the building became a soft drink store. The upstairs was the Lanktree Hotel. 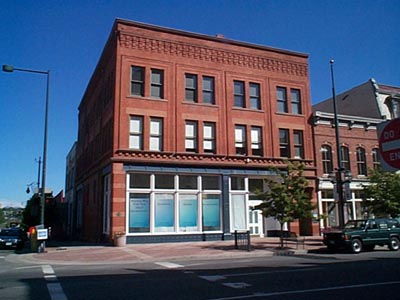 The Miller block you see in the photo was built around 1890. It is a sturdy red brick three-story building. It is decorated in a number of ways. These include the brick work along the top of the building and the contrasting colored masonry above the windows and on the corners. The building is cubic in design and shows no projections or recessions on any wall. The first floor has a cast iron frame to display goods in the front windows. 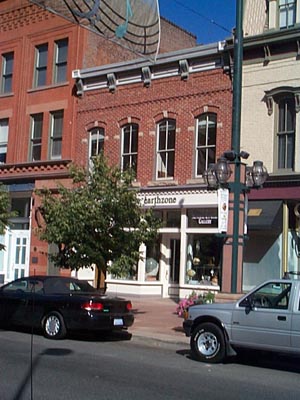 Lincoln Hall, built about 1880, at first was only two-stories high. A third story dance hall was added in the late 1880s. The dance floor was suspended from cables to give the floor more bounce. It became known as a rowdy place. After 1891, the primary occupant was the Fred Mueller Saddle and Harness Shop. Even so, at various times during its history, other businesses such as law offices, dry goods stores, restaurants, saloons, and a cigar making shop, occupied space here. 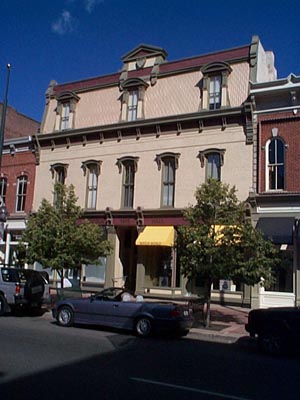 Lincoln Hall is a good example of the Second Empire style of architecture. The building has the only mansard roof in the Larimer Square Historic District. The building is also interesting because of the three third-story rectangular dormer windows and a cupola (on the top, middle of the roof line). The first floor is framed with cast iron. The iron columns have Greek-style decorations.

In February 1859, on the left side of this site, a Mr. Sims opened a wooded frame cafe and billiard parlor. The original building was the meeting place of the provisional assembly of Jefferson Territory in 1861 and of the Colorado Legislature in 1866. The right portion of the site was the Apollo Hotel. Both of these buildings were replaced in 1870 with the building you see in the photo. 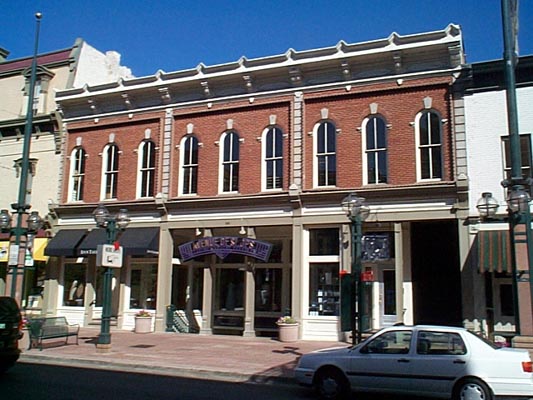 The Congdon building was completed in 1870. It is a long, red brick building that actually looks like three buildings in one. The second-story windows are rounded. You can also see a keystone in the arches above each of these windows. At the top of the building is an over-hanging cornice (the gray material running along the roof line). You can also see the fancy brackets holding up the cornice.

In June 1860, the Brown Brothers Bank became Denver's first banking establishment. It opened in a small cabin on this site (between the Apollo Hotel and a lot vacant at the time). The cabin lasted longer than the bankers, who folded their operations rather quickly. The small brick building soon replaced the cabin. This building hosted such businesses as a restaurant, a liquor store and a gunsmith shop. 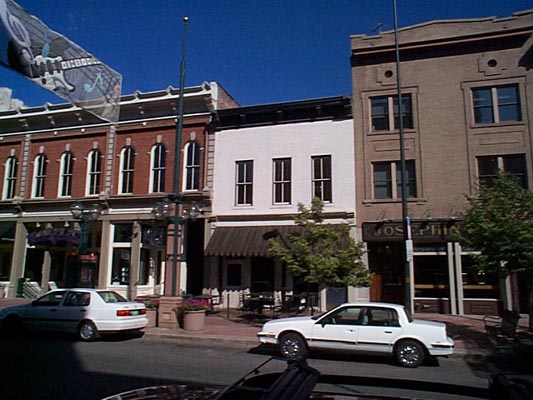 For twenty years, this site was the location of a wooden cabin and then a small brick building. In the 1880s, the Looms building was built on this site. It was a plain brick and wooden structure that survives to this day. The building has three rectangular windows on the second story. Decoration to the building is supplied by a fancy cornice (along the roof line) and the bracketed eaves holding the cornice.

No one knows for sure who or what occupied this site during Denver's early years. The Clifford and Spencer corset shop was located here just before the construction of the present building. After this building was completed, it housed the Denver Leather Company on its first floor and the Frontenac Hotel in its upper floors. 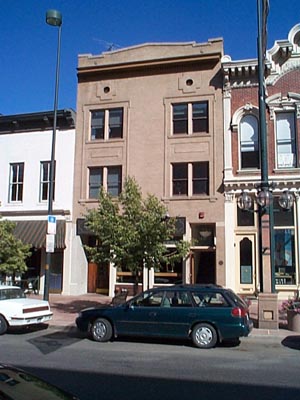 The completion date of the Frontenac building is not certain. This narrow three-story building has a decorative masonry front. You can also see round (port hole) windows in the attic. The building is topped with a jagged, decorative, roof line and a false cornice just below that.

In 1860, L.N. Greenleaf built a brick building on this site. Greenleaf's store carried such goods as canned fruit, spiced oysters, dates, candies, raisins, and gifts of various kinds. About 1875, his building was torn down and replaced by the building you see in the photo to the right. Until about 1900, several dry goods stores, owned by various people, occupied the building. Later, the building became a second-hand store and, during the 1930s, a soft drink store. 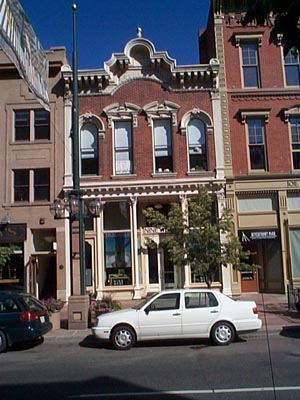 The Crawford building is a good example of the Second Empire architectural design. This design has very fancy ornamentation at the top (cornice), around the windows, and on the first floor. The building was renamed in honor of Dana Crawford. She spearheaded the rehabilitation of the Larimer Square Historic District. According to historian Tom Noel, Crawford said "I used to go antiquing in the old pawnshops down on Larimer. Then one day I noticed that these buildings themselves were fabulous antiques."

The Denver Meat Market was probably the first business to occupy this site. Later, Andrew Stanbury ran the Tambien here, which was one of the seamiest saloons in early Denver. In 1873, Stanbury and merchant Avery Gallup tore down the Tambien saloon and replaced it with this brick structure. Gallup's Bazaar occupied one section of the first floor. At one time, the upstairs was occupied by up-scale offices of dentists and lawyers. Then the upstairs became the home of the Antler's Hotel. 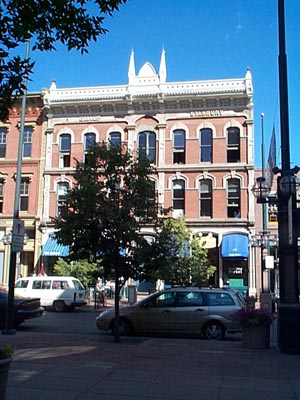 This 1873 building is basically Italianate in design. It is made of brick with decorative stone work. This stone work includes arches over all the second-and-third-story windows as well as in the columnar effect on the sides and in the middle of the building. Stone also provides lintels (arch effects) for the windows on the first floor. You can also see the fancy cornice (along the roof line) with a spired parapet at the very top of the building. You should also be able to see the name of the building (just under the cornice).

Built in 1888, the Hope Hotel building has actually been occupied by a number of stores on the first floor and a number of upper-story hotels since its completion. It has been named for the hotel that was its longest term occupant. For many years, the ground floor was also occupied by Lafitte's bar and restaurant. Its current occupant is the Cadillac Ranch restaurant and bar. 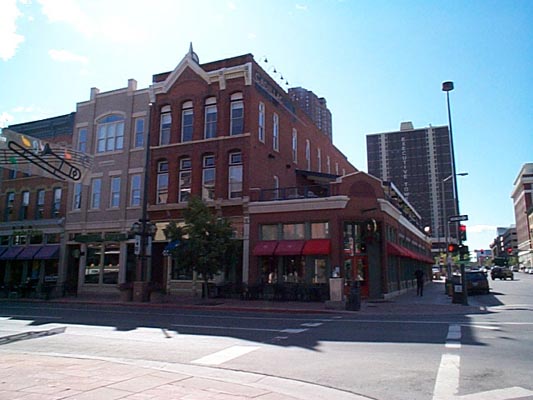 One of the distinctive features of the Hope Hotel building is the metal strip (called a frieze) near the top of the building. Also of interest is the off-center pediment (that is part of the frieze). In 1993, a one-story addition was added and the whole building was redecorated in red brick and red stone. This masonry work matches nicely that of the rest of Larimer Square. If you compare this building with others in this block, you can see many of these similarities.