What do these photos tell you about the different sports they played?

These racecars were lined up for a race at Overland Park in Denver. The photo was taken about 1925. 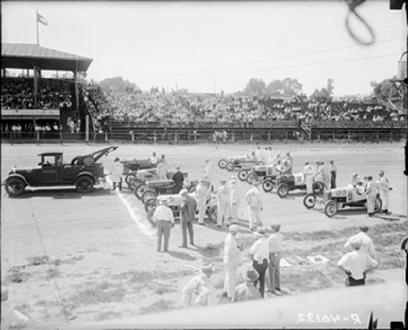 During the 1920s, auto races were held at the Overland Park racetrack in Denver.

This photo also was taken at the Overland Park racetrack. 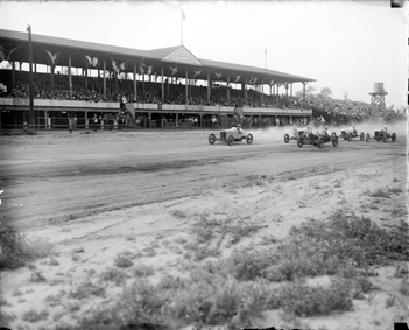 Auto racing was a popular sport in Colorado in the 1920s. The grandstand in this photo is packed with people.

This photo shows the Durango High School football team playing a game. The photo probably was taken during the 1940s. 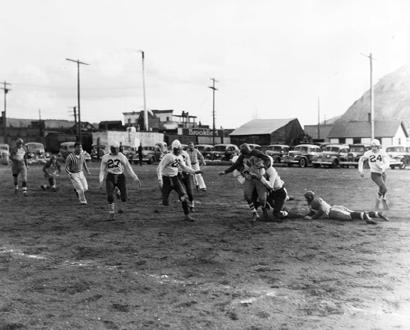 By the mid-1900s, football had become a popular high school sport. It was a more dangerous sport than it is now. The players in this photo are wearing helmets, but their uniforms have little padding.

“Football was, by all odds, the most important athletic activity in the High School at this period, the early years of this century. Late Springs militated against baseball and track. There were basketball teams both for the girls and for the boys, although I have no recollection of competition with the other High Schools except in football and the annual track meet of the University of Colorado in Boulder. Our opponents in football were Aspen and Salida. We played two games each season with each team, giving us a total of four contests and this was plenty inasmuch as the football season in the high altitudes was short.”

This is a basketball game between Sanford High School and Alamosa High School. The photo was taken in March 1941. 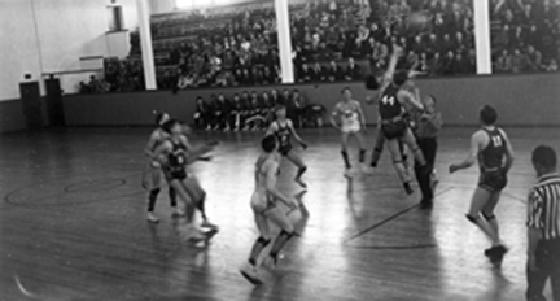 Basketball rules have changed since the 1940s, but the uniforms players wore are much the same. The uniforms worn by the players in this photo include high-top tennis shoes, short trunks, numbered tops, and knee socks. Some of the players are wearing knee pads. 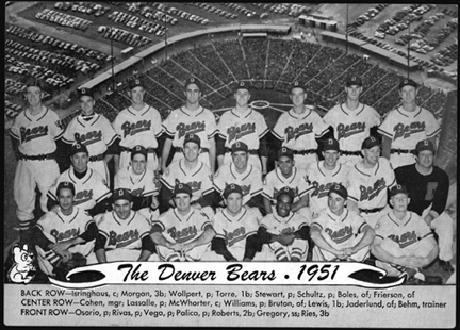 The Denver Bears were a minor league team that trained players for several different major league teams, including the Washington Senators and the New York Yankees.

[In the later 1940s, as a way of attracting tourists, Coloradoans made plans for all kinds of activities.] “Horse racing, with legalized betting, has been suggested—and nixed twice by the state legislature—and an effort is being made to resurrect the old Denver Bears baseball team in the Western League.”

This was a football game between the Denver Broncos and the Kansas City Chiefs. The photo was taken sometime during the 1970s. 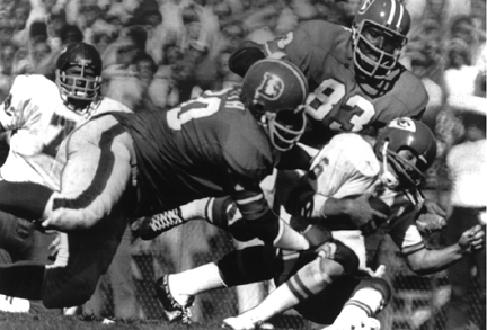 The Broncos were Denver’s first professional football team. They played their first season in 1960. When this photo was taken, their uniforms were orange and blue, with a large letter D on the helmet.

“In the spring of 1971, KOA sportscaster Bob Martin was running defense for the (Broncos) this way: ‘The Broncos had one of the top defensive teams in 1970, but had their normal plague at quarterback. New quarterbacks are being readied for the fray and will be in the breach this fall. In the meantime, over 43,500 season tickets were sold last year, and even more will probably be snapped up this season, despite a healthy increase in prices. In their eleven years, the Broncos have never had a winning record. One wonders what will happen to attendance when they do.’”