What do these photos tell you about the different holidays and festivals 20th century Coloradans celebrated?

This is a photo of the Independence Day parade in Denver on July 4, 1919. The words above the photo say: “The Birthday of the Flag That Has Never Known Defeat”. 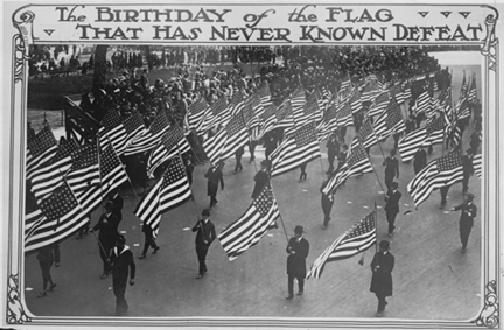 The photo of this July 4th celebration was taken a few months after the United States and its allies defeated Germany and Austria in World War I.

"A week or so before the Fourth, Dad would take Margaret and me [to]...Eddie Weiss's "Noah's Ark." There he would oversee our purchases of fireworks and pick up the tab.... As the Fourth dawned we made sure that no neighbor was left unaware that our nation's birth day was no time to sleep. Our supplies of firecrackers were rapidly depleted....
"By the time Mother called us three kids (including Dad) in to breakfast, all but our nighttime fireworks had gone up in smoke. After breakfast we would walk downtown to see the parade. Often we would take a picnic lunch to eat in the park."

This is a Memorial Day ceremony. The photo probably was taken during the 1940s. 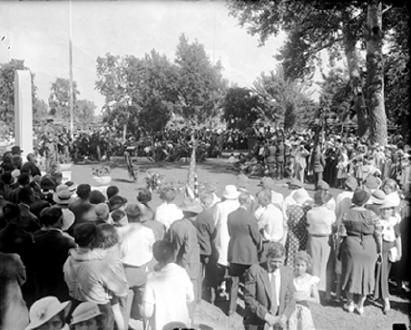 The boy in this photo is pointing at one of the lights on his family’s Christmas tree. The photo probably was taken during the 1920s. 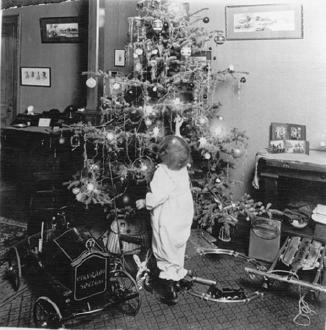 The major religious holiday in Colorado of the 1920s was Christmas. The Christmas presents the boy in this photo received include a pedal-powered car, a wind-up train on a track, and a sled.

"I recall that I had seen a toy steam-engine in Daniel’s and Fisher’s Christmas display would have liked it more than anything; but I realized it was beyond our means, so I asked Santa Claus only for a bag of marbles. When I arose in Christmas morning, I found on my dresser a set of toy soldiers and a bag of marbles.
"After breakfast I was playing with the soldiers and Mother asked me if I was sure that I found all of my gifts, so I went into the bedroom and by the head of my bed saw a box which I opened and my heart almost stopped-there was my steam-engine!"

The young Hispanic Americans in this photo are celebrating Mexican Independence Day. The photo was taken during the 1920s. 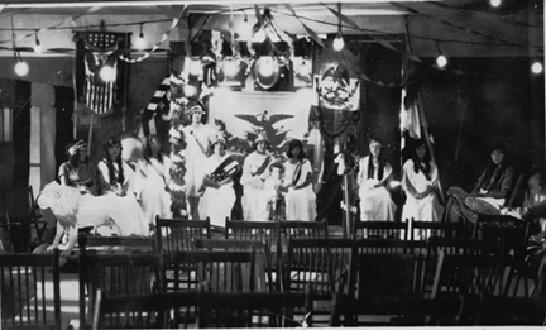 The people of Colorado belong to different ethnic groups. Many of these groups have their own special days. Mexican Independence Day is a special occasion for Mexican Americans. It is celebrated on September 16, the day in 1810 that Mexico gained its independence from Spain.

"On Sept. 15th and 16th the Spanish speaking people hold a celebration commemorating the initiation of the Independence from Spain, and on May 5th the defeat of the French army in 1862 in Mexico. During these celebrations they select from a group of girls their most beautiful and most popular senoritas as Queen to preside over the festivities, while the other girls serve as maids of honor or condesas. The festival is celebrated with dancing and singing. Speeches are made relative to the event and in honor of the heroes of the date. In the singing and dancing the children take a large part."

These young Hispanic Americans celebrated Mexican Independence day by riding in a parade. 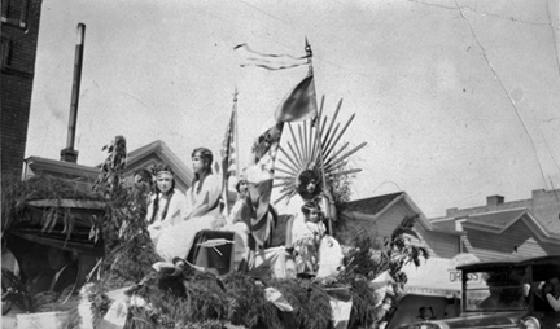 The photo was taken in Sedgwick, Colorado about the year 1925. The town of Sedgwick is in the far northeastern corner of Colorado.

These people are dressed in costumes for Saint Patrick’s Day. 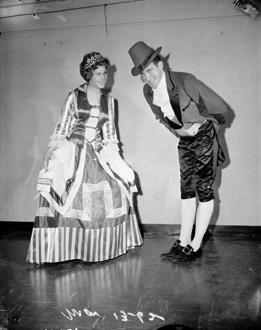 Many people whose ancestors came from Ireland lived in Colorado. Saint Patrick’s Day was a special day for Irish-Americans. It is celebrated on March 17.