What do these photos tell you about what they did for recreation?

This is the Young Men’s Christian Association (YMCA) pool in Littleton. The photo was taken sometime during the 1960s. 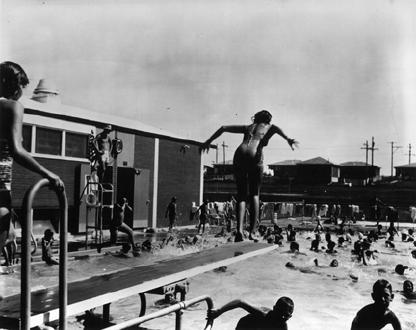 Swimming has always been a popular form of recreation for young people in Colorado. By the mid-1900s, the most popular pools were those run by cities and by non-profit groups such as the YMCA.

This is the town of Aspen viewed from Aspen Mountain. The photo was taken about 1950. 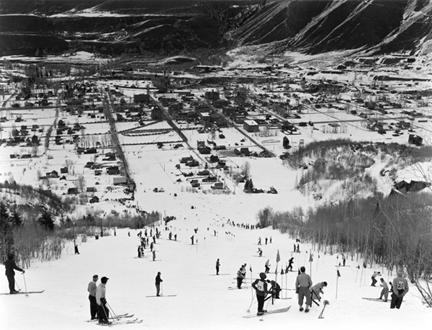 By the 1950s, downhill skiing was a popular form of recreation in Colorado. Aspen, an old mining town, was one of the state’s first ski resorts. The skiers in this photo are taking part in a downhill slalom race.

“Until the winter months of 1936-1937 there had been aroused no appreciable interest in the sport of skiing in the town of Aspen. The total number of skiers was small, and the general proficiency of what skiers there were was practically insignificant.”

This family was sightseeing at the Royal Gorge in southern Colorado. The photo was taken about 1930. 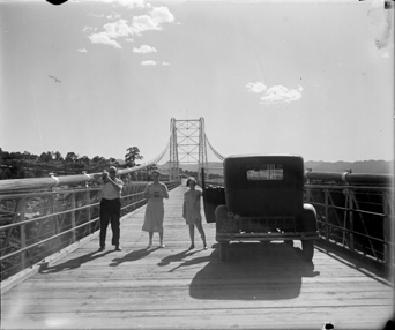 Sightseeing is one of Colorado’s oldest forms of recreation. Owning an automobile made it possible for more and more people to get away for sightseeing. One popular spot was the Royal Gorge, a deep canyon cut by the Arkansas River. The road over the bridge is 1053 feet above the river.

"In the afternoon I had an invitation from the Edwardses...to take an automobile trip to Lookout Mountain. The outing was breathtaking because of the wonderful air.... After the outing all three autos dropped in at [the Edwardses] for supper.... And so I spent Easter."

This is an auto campsite in the Colorado mountains. The photo was taken about 1930. 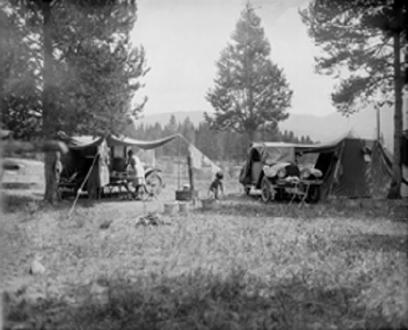 Many Coloradoans have enjoyed camping in the mountains. Earlier generations reached camping sites by wagon and packhorse. Automobiles and modern equipment made camping much easier. Among the equipment of the campers in the photo are tents with awnings, a folding table and chair, a campstool, and metal tubs.

"More people than constitute the population of the ordinary small town last summer enjoyed life in the open under the trees in the pubic camping grounds at Denver’s beautiful City Park. For in two years these attractive grounds became so widely known throughout the nation that during the summer months of 1916 they were utilized by 5,407 motorists…. There were 1,963 automobiles registered in the City park camp directory last summer and they came from thirty-seven different states, from Canada and the Philippine Islands."

This is the merry-go-round at Lakeside Amusement Park in Denver. This photo was taken about 1925. 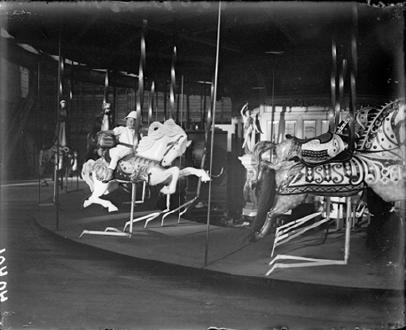 The girls and women in this photo are getting ready for a ski race. The photo was taken in Steamboat Springs about 1920. 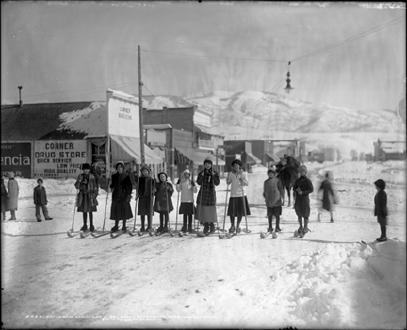 Cross-country skiing is an old sport in Colorado. Miners used skis as a form of recreation as well as transportation.