What do these photos tell you about what they did for entertainment?

The band in this photo was playing at the Greek Theater in Denver’s Civic Center. The photo was taken during the 1920s. 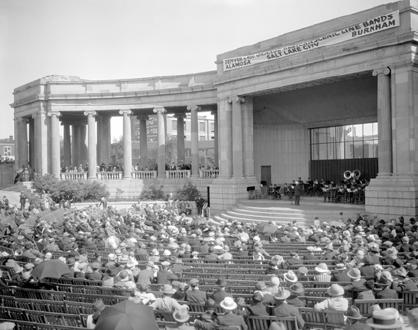 Most people in the 1920s went to local dance halls, theaters, and during the summer to bandstands, to hear music. The band in this photo used the outdoor Greek Theater as its bandstand.

“Denver owns her own Auditorium, where free concerts are given by the city. . . . Furthermore, Denver has been one of the first American cities to begin work on a ‘civic center.’ Several blocks before [in front of] the State Capitol have been cleared of buildings, and a plaza is being laid out there which will presently be a Tuileries [Paris-like] Garden in miniature, surrounded by fine public buildings, forming a suitable central feature for the admirable system of parks and boulevards which already exists.”

The actors in this play were performing at the Central City Opera House in 1956. 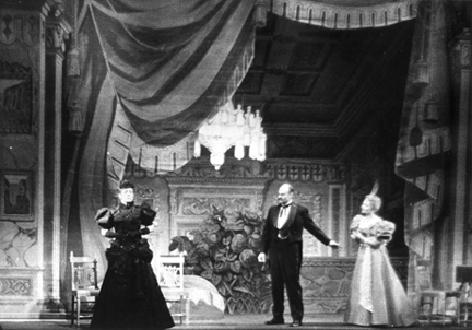 During the 1950s, the old Opera House at Central City was restored as a theater and playhouse. In this photo the stage was decorated to look like a hotel lobby during the 1890s. The play being performed was called The Ballad of Baby Doe. It was about Baby Doe Tabor, one of Colorado’s most famous women.

“Cultural attractions have been crowned with some success [for keeping tourists in and around Denver]. A festival, sporting big names from Broadway and the Metropolitan [referring to New York City theater and opera companies], is held annually in the old opera house in Central City.”

The woman in this photo is listening to an early radio. The photo was taken about 1924. 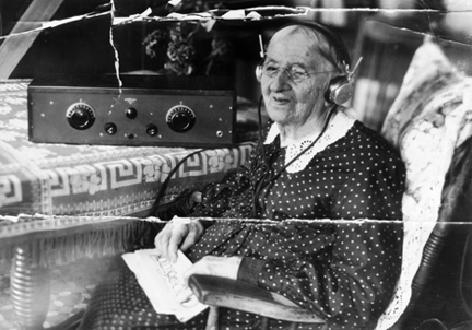 The early radios made during the 1920s did not have speakers. The listeners used headsets instead.

[The Solitaire Cowboys was formed in 1928 to promote Solitaire Coffee sales via radio advertising.] “This was one of the very first of the ‘Westerns’ or cowboy shows. It was purely a local show, but with a huge audience in the West, since KOA [one of Denver ‘s first radio stations] in those days reached from Canada to the Gulf [of Mexico]. It was the most popular program on KOA with the single exception of Amos and Andy, according to the crude audience checks of that time. Because of this popularity, NBC put the Solitaire Cowboys on its coast-to-coast [radio] network as an unsponsored show. So it evidently was one of the first Western cowboys shows on the networks. ‘Death Valley Days’ came in about the same time.”

This was the radio station orchestra that played for KLZ, Denver’s first radio station. In the early days of radio, each station had its own orchestra. They broadcast live music into listeners’ homes. 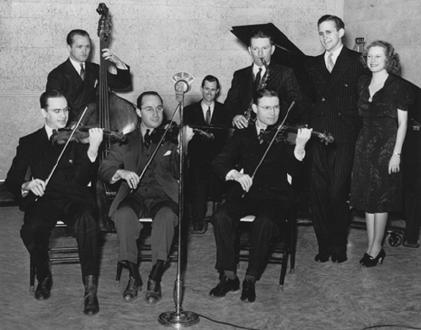 The first radio broadcasting station in Colorado began in Colorado Springs in 1920. It moved to Denver the next year and became station KLZ. Station KOA, which still exists, began broadcasting from Denver in 1924.

This photo was taken on Denver’s Curtis Street after sundown. It shows the marquees of movie theaters. 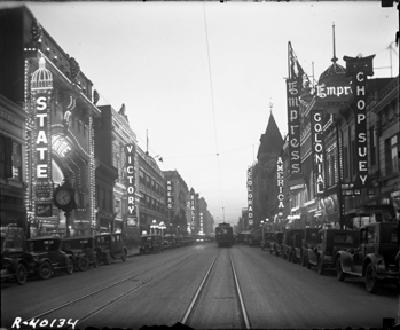 During the first half of the 20th century, most of Denver’s big movie theaters were located on Curtis Street. The blocks of this street on which they were located was called “Theater Row.” The marquees were decorated with tall signs and bright lights. The names of the theaters shown in this photo include the State, Victory, Empress, Colonial, America, Rialto, and Colorado.

"In 1915, when on a visit to Denver, Thomas Edison reportedly said that Curtis was "the best-lighted street in the world," between 15th and 18th. At night it was almost as bright as day--so bright in fact, that no city street lights were ever used.
"Every theater lobby was a dazzling place, jammed with waiting patrons. Marquees were ablaze with traveling electric words and signs. Blinking and intermittent spot and floodlights were on every business establishment and surplus World War I carbon arc anti-aircraft searchlights roamed the sky."

This is a photo of Red Rocks Ampitheater near Denver. 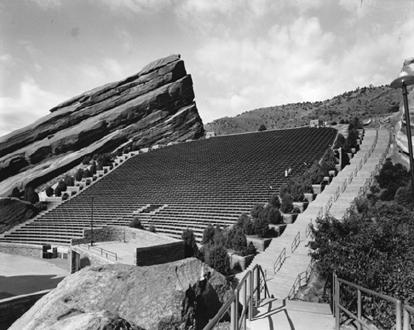 The outdoor theater in this photo belongs to the City of Denver. It was built during the 1930s. It is still used for concerts during the summer.

“Cultural attractions have been crowned with some success [for keeping tourists in and around Denver]. . . . The summer of 1948 saw the first of an annual series of musical extravaganzas in the huge, awe-inspiring natural amphitheater of city [Denver] owned Red Rocks Park nestled in the foothills.”