What do these photos tell you about how these cities grew over time?

These are some of the businesses that were located on Santa Fe Avenue in Pueblo in 1872.

Pueblo was founded as a fur trading post. Then it became a supply town for nearby farms and ranches. This is an early photo of its business district. The X-10-U-8 Saloon was located in one building. Another building had a combined boot and shoe store, bookstore, and post office. The small building on the right was a lawyer's office.

"The first butcher was John Wheelock. . . . He had a little slaughter house at the edge of town. . . . John Jenner ran a grocery store. Sol Arkus had a small grocery and fruit stand, mostly lemons and oranges, occasionally apples and grapes. Bartels had a general merchandise store. . . . Wilson had a dry goods store; later Paul Wilson had quite an extensive store on Main Street. Business up to this time [about 1872] had been confined almost entirely to Santa Fe Avenue."

This is another photo of Santa Fe Avenue in 1872. 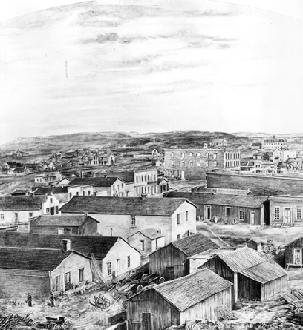 Santa Fe Avenue was the center of Pueblo's business district. Most of the buildings were one- and two-story frame buildings. This photo shows only one three-story brick building. The railroad arrived in 1878 and some visitors predicted that Pueblo would rival Denver.

“Returning to Colorado Springs, we take the south bound train making our first stop at San Pueblo, a city of about 5,000 inhabitants. It does a lively business connected with the mining and stock-raising interests. There are several hotels, three banks, railroad machine shops, foundries, smelting works and a lively daily paper, the Democrat. Pueblo will in time be a formidable rival of Denver.”

This is Santa Fe Avenue about twenty years later. How had Pueblo changed since the previous two photos were taken? 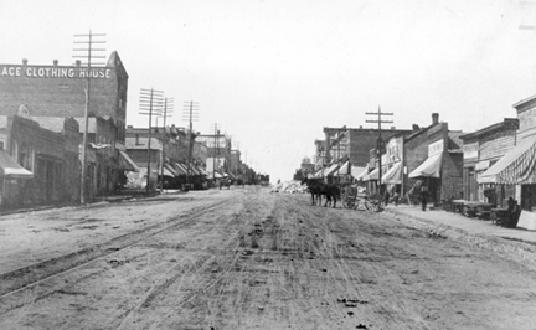 This photo of Santa Fe Avenue probably was taken sometime during the 1890s. By this time, more of the city's buildings were made of brick. The poles for power lines indicate that the stores and shops were lighted by electricity. A new form of transportation also has been added. The tracks running down the middle of the street were for a horse-drawn streetcar.

"The Missouri Pacific Railway Company was brought into Pueblo in about [1887 or 1888]. I will never forget Jay Gould [owner of the railroad] . . . putting his finger on the map at the location of Pueblo and saying that Pueblo would be the ‘Pittsburgh of the West.’ . . . In the middle ‘80s the boom started and lawyers and doctors flocked in. Additions to the town were laid out in every direction. . . . The boom commenced to peter out in the early ‘90s and when the panic of ’93 struck, everything went flat. . . ."

This photo of downtown Pueblo was taken about 1910. 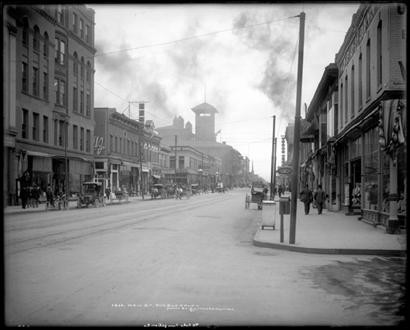 By the early 1900s, Pueblo had become a prosperous, industrial city. It had steel mills, ore smelters, and factories. This photo also indicates that Pueblo had air polluted with smoke from coal-burning furnaces.

"There were few houses near the smelter of any size, the cottages rented by the hotel, another rooming house, and a saloon was about all that one could find other than the smelter itself. The smelter was running all of the time, the men knew nothing of short hour regulations and worked whenever they could get a chance.
"In the hotel there were three other girls, and about six cooks hired to care for the men who boarded at the place. I thought I was making a grand salary - I made $20 a month, and had my room and board furnished. My work consisted, for the most part, in waiting on tables, and going for beer for the thirsty boarders."

This is the Colorado Fuel and Iron Company's steel mill in Pueblo. 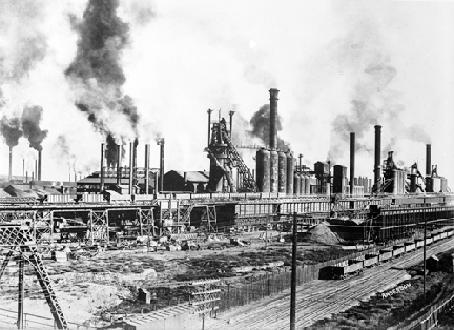 Pueblo became a center for steel making. The first mill was built in 1880. Twenty years later it had the largest steel mills in the Rocky Mountain west. The mills made rails for railroads, wire fence, and other steel products.

"The well ordered suburbs of Minnequa with their hundreds of model houses for workmen pass in review on the left, while on the right long lines of freight cars, the scores of tall, slender stacks, giant blast furnaces on the immense steel and brick buildings of the Minnequa Works and of the Eller Smelter separate themselves from the smoke and from one another, and slip by. "

"A glimpse on the left of the lawns, trees and neat executive buildings of the Minnequa Works, and then, on the right, one gets for a moment before the train pulls into the station, a view of the entire central and northern part of the city, with all the larger and finer buildings appearing in their most favorable aspect. "