What do these photos tell you about how 19th century Colorado cities looked like?

These are two of the first buildings in Grand Junction. The photo was taken in 1882. 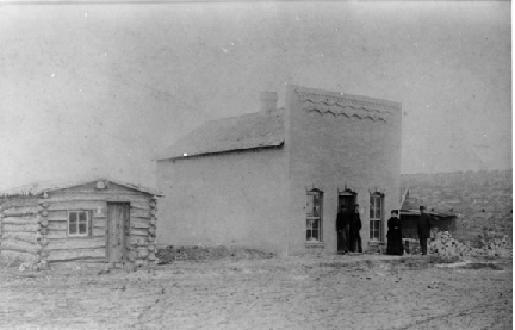 The city of Grand Junction began as a marketing town for the nearby farms. It was founded after the Ute lands on the Western Slope were opened to settlement in 1880. The Utes in this area were removed to reservations in Utah.

"There were at this time about 50 or 60 people located in what is now Mesa County, most of these were in Grand Junction. There were no houses in town except log cabins, the windows and doors were made out of gunny sacks, the roofs out of dirt, lumber was worth $150 a thousand. Beef, the finest porter house steaks, were worth 5 cents a pound. This cheap price of meat was owing to the fact that this was an Indian reservation, and the cattle rustlers were stealing the cattle for beef. "

"The town company were giving away the best business lots on Main Street to anyone who would build a log cabin on them. The pioneers were all poor men. The saloon business was the principal business of the town. Colorado Avenue, which was at that time the principal street, was not known by its proper name, but was known to everybody as Hoodoo Street."

This photo of buildings on Main Street was taken about 1884. It shows how Grand Junction's buildings changed over a three-year period. 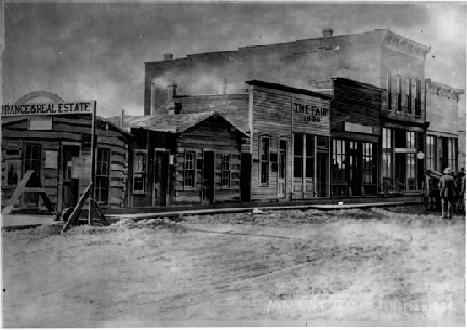 “The first thing all the early settlers [in Grand Junction in 1882] proceeded to do was to build little log huts on their claims to live in during the coming winter, and to establish their claim to the land. Douglas Blain’s cabin was 10 feet square, build of cottonwood logs, having a door made of split poles, a hole for a window, and a roof of earth. Other cabins were constructed similarly.”

This is a longer view of Main Street in Grand Junction in the year 1884. 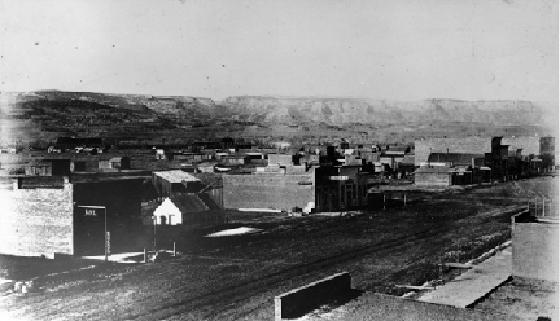 The city of Grand Junction was only three years old when this photo was taken. The number of buildings in the photo indicate how rapidly the city grew.

“There were several log cabins on the town site, which had been laid out with streets and alleys marked with stakes by the surveyors. One or two rough board one-story buildings, and the walls of two hotel buildings being build with sun-dried adobe bricks. A saw mill had just been brought in by Innis and Hobbs, and was set up on the south side of the river, on Pinon Mesa. . . .”

“One morning I went down to breakfast at the Grand Junction Hotel, located in a log cabin at 1st Street and Colorado Avenue. There was no floor, just nature’s soil. The table was made by driving four posts in the ground and nailing across pieces on which planks were laid, and an oilcloth top as covering. The benches and seats were planks resting on boxes. In one corner of the room I noticed a narrow space had been curtained off with burlap, or gunny sacks split open and hung as a screen, behind which was a sleeping bunk built on the side of the wall.”

This is a photo of Main Street about the year 1900. How has the street changed since 1884? 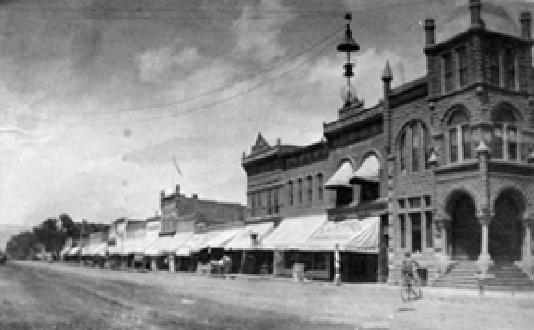 Many new buildings were constructed since the previous photo was taken. Most of them are made of brick. The building on the corner is made of stone. Electric streetlights also have been added. The street lamp can be seen in the upper middle of the photo.

This photo of Main Street was taken about 1910. What new form of transportation does it show? 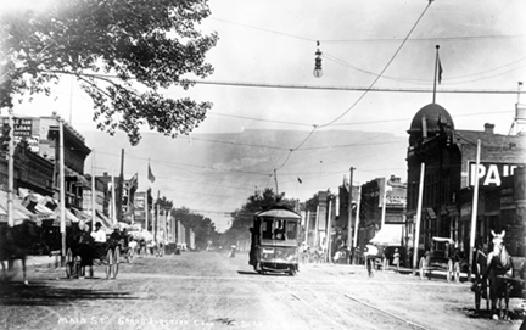 This photo shows an electric streetcar or trolley coming down the middle of the street. The lines overhead provide it with electric power.

This photo of Main Street also dates from about 1910. How many forms of transportation can you find? 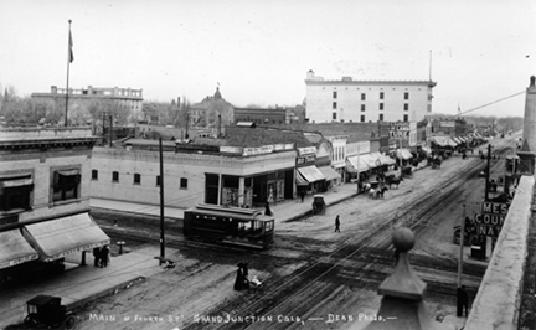 This photo includes an early automobile (lower right), an electric streetcar, and horse-drawn wagons. It also shows a woman crossing the street pushing a baby carriage.