What do these photos tell you about how 19th century Colorado cities looked like?

This is a photo of early Denver. It was taken sometime before 1864, when the city was less than five years old. 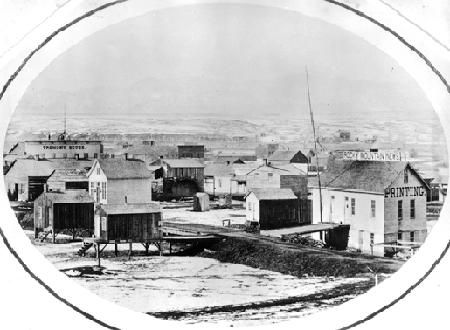 "It was an exceedingly primitive town, consisting of numerous tents and numbers of crude and illy constructed cabins, with nearly as many rum shops and low saloons as cabins…. Horses, cows, and hogs roamed at will over the greater part of the village."

Wagon trains like the one in this 1868 photo kept Denver supplied with goods from the east. The photo was taken on Market Street. 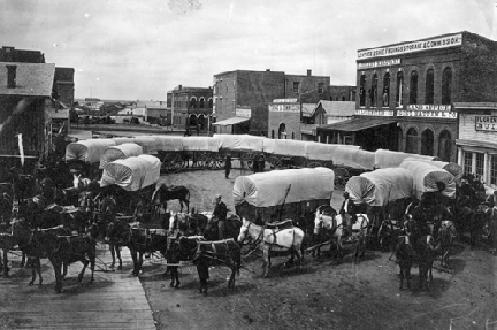 Market Street was the center of Denver’s first business district. The signs on the buildings in this photo advertise some of these businesses. They include a land sales office, a leather and shoe store, a saddle and hardware dealer, a storage company, a meat and vegetable market, and a bank.

"Our city…has in a few months increased to a city of six thousand people; with its fine hotels, stores, manufactories, and all the appliances, comforts and many of the luxuries of civilization…. Great trains of huge prairie freighters arrive and depart almost daily, and more than a thousand emigrant wagons arrive each week."

This is a photo of Market Street about forty years later. Can you find the electric streetlight in the photo? 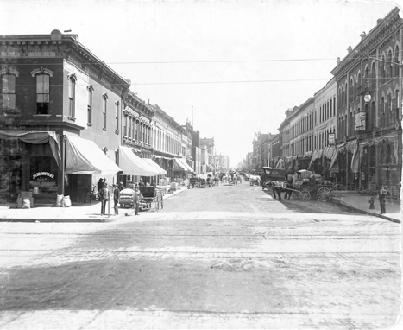 By 1900, Market Street had changed. Once a street of retail stores, it had become the center of Denver’s wholesale trade. Farmers sold their vegetables and other produce to the wholesale merchants. They, in turn, sold them to storekeepers and café owners. Denver had electric streets lights by this time. The streetlight bulb can be seen in the upper right part of the photo.

"The newspapers announced as "approaching the miraculous" the discovery by Thomas A. Edison of the incandescent electric light, so we were prepared for the miracle when April 21, 1883, the just organized Colorado-Edison Electric Light Company placed on display in a vacant store room on Curtis Street a 16-candle power incandescent light, Denver's first. . . . Electricity had come to supplant gas. Soon the residence sections were no longer dark at night. We had lighthouses on the prairies!"

This is a photo of busy Larimer Street in the mid-1880s. The vehicles on this busy street include delivery wagons, carriages, and a horse-drawn bus called an omnibus. 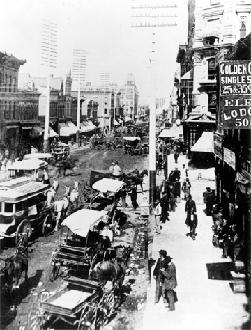 Larimer Street was a busy retail district. It had a variety of stores where people came downtown to shop. The streets were crowded with vehicles of all kinds.

“It had been iterated and reiterated that rain rarely fell in Denver in the summer, yet I recall most definitely that there was a shower or a heavy rain in the city some time every day for nearly three weeks after August sixth. All good Colorado boosters said it was so healthy in the State that no one ever died, they calmly ‘dried up and blowed away.’ So when, as frequently happened, a six-horse-drawn ore wagon was seen stuck hub deep in the mud at the corner of Larimer and Fifteenth Streets I felt sure that there must have been a mixup of ideas over Colorado’s dryness.”

Seventeenth Street In The 1890's

This is Seventeenth Street in Denver. This photo was taken in the 1890s. 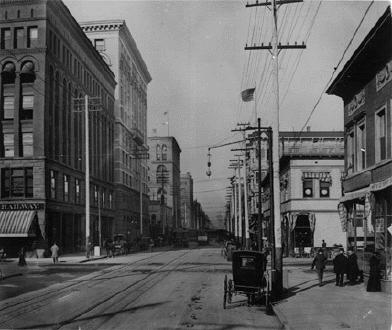 Seventeenth Street became the heart of Denver's banking and financial district. The largest banks and investment companies in Colorado were located there.

This is a photo of the interior of the Colorado State Capitol, which was completed in 1895. 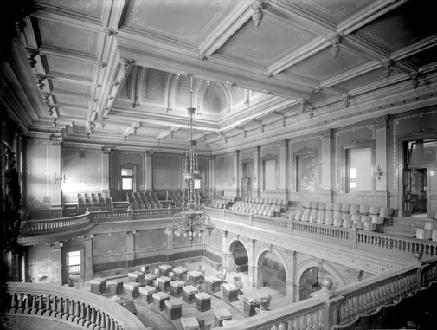 Denver also was the state capital. The legislature met for several weeks each year to make laws for the people of Colorado.

“The Capitol is situated on Capitol Hill, 1 ½ miles from Union Depot. . . . The corner-stone of the Capitol was laid July 4, 1890. . . the building was not completed until 1895. . . . The cost of construction exceeded $2,500,000. . . . The Capitol site includes 10 acres of land [and] the building stands in the center of a beautiful terrace. . . . It was built of native granite, and finished inside with Colorado onyx. The structure is of the Doric order of classic architecture, with Corinthian ornamentations. In its general appearance it is characterized by simplicity and severe grandeur. The interior decorations are tasteful and artistic.”