What do these photos tell you about the different sports and recreation activities that people living in the city would engage in?

This man posed with his high-wheel bicycle. The photo was taken about the year 1888 at Denver's Sportsman Park. 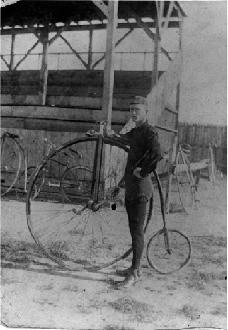 In the 1880s, bicycling was a new form of recreation. The bicycles of that time had one large wheel, with one small one in the rear. It was a man's sport because women could not ride a high-wheeler in a skirt. The man in this photo is dressed in a sports outfit that includes tight pants, a fitted jacket, and a cap.

“[A] High wheel bicycle . . . it was one of the first. . . . [There] was a little trick to [riding] it. Maybe a little more than riding a bicycle today. The way you got on and off . . . was from the back, and you stepped up on a step, and you got on. You had to be in motion to ride it. . . . It wasn’t bad ridin’ on the pavement and all, but I always thought, boy, ridin’ on cobblestone on the streets . . . and the bricks—it was a little trick. I read where they used to have races on these high-wheelers, and I imagine it was quite a thrill to those who could race ‘em at that time.”

This photo shows men gathered near Denver in 1895 for a bicycle race. Although extremely popular for a time, the "bicycle craze' was soon replaced with a new "craze"--the automobile. 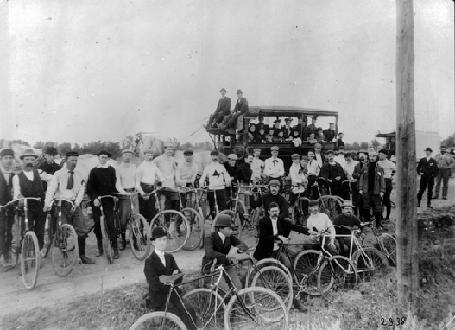 Men also raced bicycles as a sport. The modern-looking bicycles in this photo were called "safety" bicycles. During the 1890s, they replaced the old high-wheelers. Women as well as men could ride these bicycles.

“Bicycle clubs sprang up all over the state, their membership running into the thousands. There were in Denver professional bicycle exhibitions and races . . . and there were professional and amateur races galore. . . . Everybody rode a ‘wheel’—men, women and children, old and young, clergymen, lawyers, doctors, business men. When the first automobile, a ‘one-lunger’ [one cylinder engine], made its appearance in Denver, about 1901, the number of bicycles in the city was nearly or quite as great, in proportion to population, as the number of automobiles of the present day [1933].”

The people in this photo are ice-skating on City Park Lake in Denver. The photo was taken about 1900. 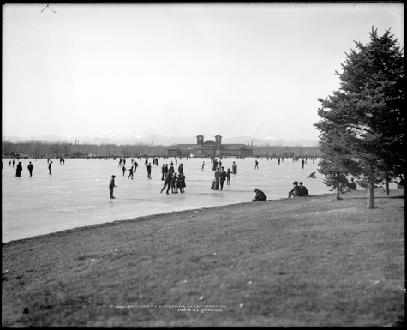 In the late 1800s, ice-skating was popular kind of family recreation. This photo includes families with children as well as adult couples. Denver's City Park Lake was a popular place for ice skating.

"He kept the old mill pond flooded for all of us in the winter time so we’d have a place to skate. . . . First we [had skates that clamped on your shoes], you know, with a key and then, oh boy, finally got a pair of shoe skates for Christmas, and things were lookin’ up."

This miniature train was an amusement ride for children at Elitch's Gardens. The train was pulled by a small steam-powered locomotive. 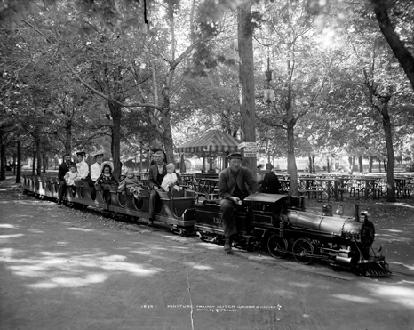 Families also enjoyed going to Elitch's Gardens. It had a picnic area, a small zoo, and roller coaster rides for children. Elitch's also had a theater that offered plays for adults.

“Elitch’s Garden, the city’s great summer amusement place, is famous all through the country. It was originally a farm, and still has a fine orchard besides its orderly Coney Island [a New York City amusement park] features. Children go there in the afternoons with their nurses, and all of Denver goes there in the evenings, when the great attraction is the theatre with its splendid stock company [of actors], which is of a very high order.”

Picnic In The Garden Of The Gods

The group in this photo was having a picnic at the Garden of the Gods near Colorado Springs. 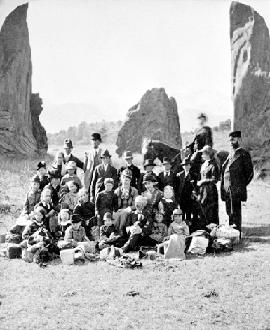 People then as now enjoyed hikes, picnics, and just being out of doors. The Garden of the Gods, located near Colorado Springs, was a popular place for sight-seeing and picnicking. It was well known for its unusual sandstone formations.

"The last part of July we could go into the mountains for picnics because then the danger of cloud bursts and floods was over. . . . We rode in excursion cars that didn't have any glass in the windows and the cinders from the engine showered down on us. . . . When we came to Crystal Lake the train stopped and we all got out and carried our lunch boxes and baskets with us."

Source: Edwina H. Fallis, When Denver and I Were Young (Denver: Sage Books): 145.