What do these photos tell you about what city churches were like?

This is the Presbyterian Church in Colorado Springs. This photo was taken in about 1872. 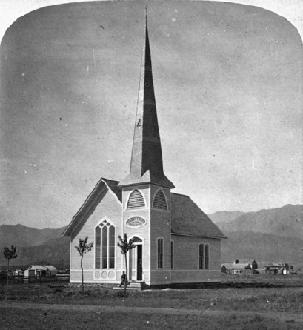 Religion played an important role in the towns and cities of Colorado. The new townspeople brought their religion with them. Churches were among the first buildings constructed in the new many towns. This Presbyterian Church was built within a year after Colorado Springs was founded.

"When the [Larimer Street Methodist] church was completed it was as much of a landmark in the city as the capital is today. It could be seen plainly from any point of the city, and people came from over the state to see it."

This is the choir of the Presbyterian Church in Greeley. The photo was taken in 1898. 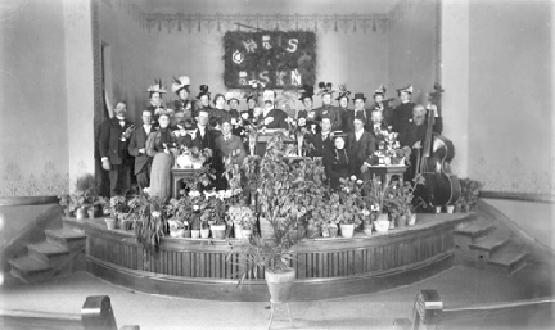 Music was an important part of the services in most Protestant Christian churches. Men and women sang in the choir and played the organ or other musical instruments.

"On Sundays, oh we had to go to church, of course. We went to the Episcopal Church then. I don’t remember too much about it except that as I grew older, a teenager, I suppose, I always sang in the choir."

This is the Central Presbyterian Church in Denver, which was built in 1878. 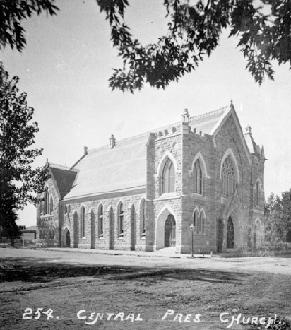 The cities of Colorado had many fine examples of church architecture. The Central Presbyterian Church in Denver was built in the Gothic style. That is, the windows and doorways had pointed arches like those of churches in Medieval Europe.

"Our first Sunday was spent in Denver. We were fortunate enough to be directed to the Jesuit Church, which we found to be poor, small, and dingy, unworthy alike of the great Order and the growing city. We were assured, however, that it was the best Catholic church in Denver, which is the more surprising as [other Catholic orders] had kept pace with the progress of the city, fine Episcopalian, Presbyterian, Methodist, and Unitarian churches have been erected."

This photo shows the exterior of the First Baptist Church in Denver. The church was built in 1883. This photo was taken in 1893. 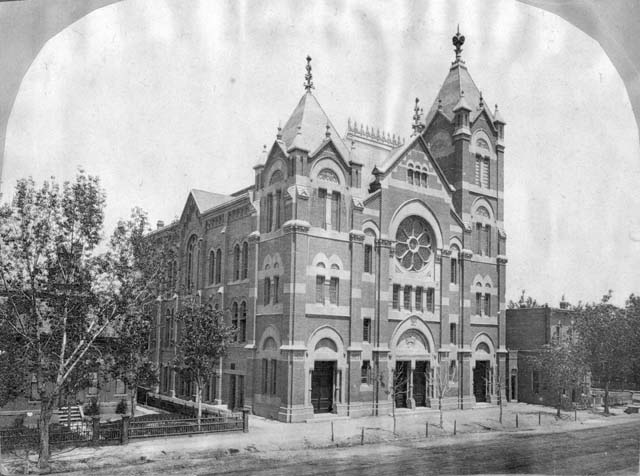 The First Baptist Church in Denver was a large church. It seated several hundred people. The brick church has many features of Victorian architecture. These include towers with spires and arched windows and entryways. The windows were made of stained glass.

This photo was taken near the front of the First Presbyterian Church in Colorado Springs. 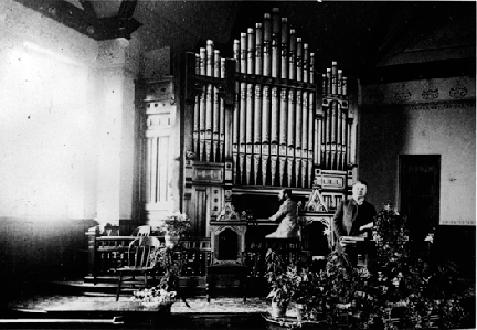 The man seated on the bench is playing the church's pipe organ. You can see its tall pipes in the center of the photo. The man standing at the right is the minister. He is standing in the pulpit. Ministers preached to their congregations from the pulpit.

"The Methodist Church was always striving to bring advantages to their members in the way of musical events, lectures, and study groups of which my father was ever a member. Once I was taken to hear a young man talk about Russia. . . . Another time a young man in a turban told us about India. He also included some of his experiences in this country."

The church in this photo is St. Peter’s Catholic Church in Pueblo.

Most people from the East who settled in Colorado were Protestants. However, the larger cities also included many Catholics. Most of the Italians who worked in Pueblo’s steel mills were Catholic. Many attended the church in this photo.

This is the First Congregational Church in Colorado Springs. 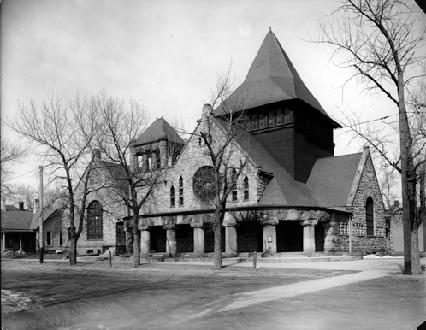 This church is a mixture of architectural styles. Can you find evidence of the Gothic style described under Photo 3 above? (Look for the pointed arches.)

"Now and then my father would take me to a "Love Feast," a Sunday morning prayer meeting where those present partook of bread and water in a manner similar to the communion service. Every Wednesday evening there was the regular Prayer Meeting and on New Year's Eve there was a Watch Night service where the Old Year was ushered out and the New welcomed in with prayer. All this would appear to be too large a dose of religion but, after all, there was little else for a God-fearing family to do in those days."