What do these photos tell you about what city people did for entertainment?

This is the stage at the Opera House in Montrose. The photo was taken in 1915. 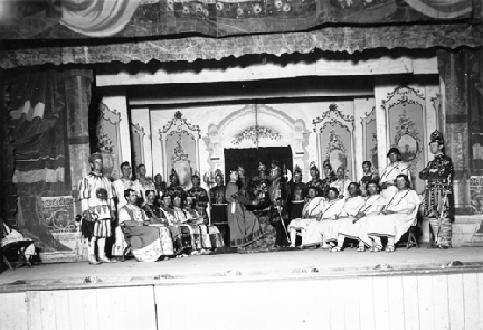 Nearly every large town had a theater or high school auditorium where local townspeople put on plays. Sometimes a professional actor from out of town would play the lead role. Going to watch plays at the local "opera house" was a popular form of entertainment.

"We didn't have to wait for the dramatic critics to tell us what people thought of the show. The critics sat in the gallery, and when they didn't like us they called down to us and said so. If the show was dull someone in the gallery would put life in it. . . . The price of seats was high, but gold dust and vegetables were acceptable as money. A dozen eggs would buy a seat in the gallery, provided the eggs were left at the gate."

This photo shows the interior of a theater that probably was located in Denver. 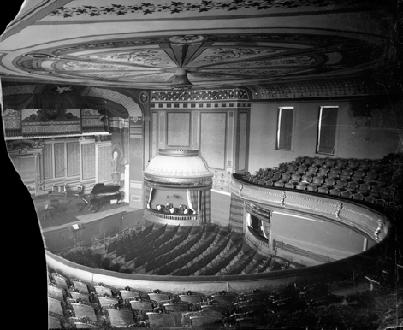 Attending a play at a big theater in Denver was an experience to remember. The theaters were lavishly decorated. The ceilings and walls had colorful designs. The seats were padded and soft. The electric lights dimmed, the audience hushed, and the play began. Such fine theaters helped even not very good actors become almost fine performers.

"It was a great day for me when I went in the front door of the Tabor Grand and walked up hill through the wide hall to the door where the man stood to take the tickets. . . We went through the door into the opera house. There were rows and rows of seats. A boy with brass buttons on his coat came up and took Aunt Carrie's tickets. . . . The boy ran down the aisle and stopped at a row of seats. . . . He flip-flopped the seats down, handed the tickets back to Aunt Carrie, gave us each a program and scurried back up the aisle."

This photo was taken outside the Elitch's Gardens theater in Denver. 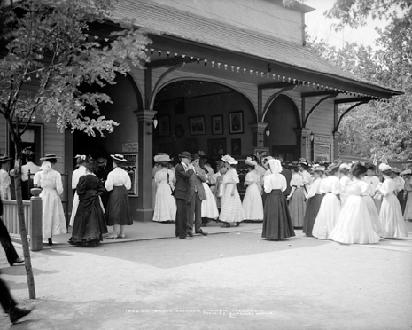 The theater at the Elitch's Gardens amusement park was a popular Denver theater. It put on vaudeville shows that included a variety of comic performers and acrobats as well as plays and musical performances.

"From 1888 to the spring of 1890 we were very busy laying out the grounds for the amusement park. We were also building the theater and animal houses. At 1:30 o'clock the doors of the theater were opened for the first performance in Elitch's gardens. Admission was free, and those who could not get seats stood around under the trees and watched the show, for the sides of the playhouse were not enclosed in those days. We had a vaudeville show. Here is the program from that first performance: "

The men in this photo are the Grand Junction Coronet Band. 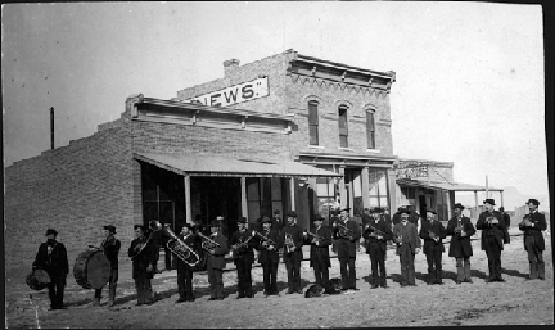 Most cities in Colorado in the late 1800s provided musical entertainment. That usually meant a performance by a local band or choir. Nearly every town had a brass band. Visiting bands from nearby cities also put on concerts.

"The band was organized in 1888. It is interesting to note that these bands were the outcome of politicians who saw the necessity to boom parties for presidential campaigns. The uniforms for these bands were usually purchased with funds raised by the subscription method. When there was a deficit they usually gave a dance to raise the amount."

"The men of the band were mostly CC&I (old CF&I) [Colorado Fuel and Iron Company] and depended largely on the support of the mill. If the mill was running steadily the band flourished. If the mill shut down for any length of time the band was busted and finally disbanded."

This is the White City amusement park in Denver in about 1910. The park was later renamed the Lakeside Amusement Park. 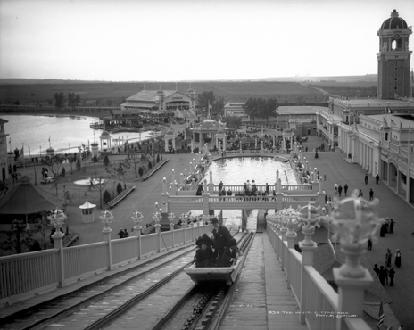 The people of Denver in the early 1900s loved amusement parks. They could choose between Elitch's Gardens and the White City park. The latter was known for its Big Splash ride, which is shown in the photo. Amusement parks were designed for adults as well as children.

This photo was taken on Curtis Street in Denver about the year 1913. The brightly lit signs are the marquees of movie theaters. 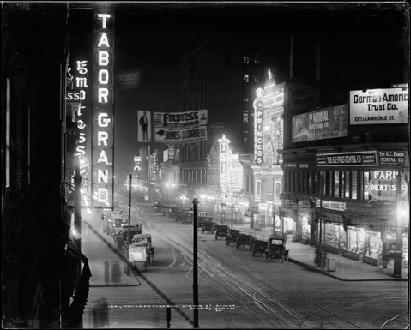 In the early 1900s, movies were the newest form of entertainment. Nearly every town had at least one small movie theater. Denver had a row of theaters clustered on Curtis Street, which also was known as "moving picture row." The marquees or electric signs in this photo advertise the Princess, the Isis, the Empress, and the Tabor Grand theaters.

"The second picture represented the breaking of waves on the seashore; the effect was simply marvelous, wave after wave came tumbling on the sand and as they struck and broke into tiny floods just like the real thing, some of the people in the front row seemed to think they were going to get wet and looked about to see where they could run to in case the waves came too close."