What do these photos tell you about Colorado families in the 20th century?

This family lived on a farm near Keota. The photo was taken in 1930. 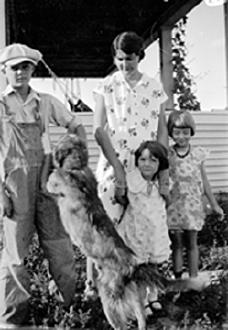 “Originally, of course, in my memory, there was just kerosene lamps and then years ago Dad purchased a thirty-two volt electric lamp. They we had our own electricity. It was satisfactory. We could run small motors, things of that nature. We really didn’t have electricity here until 1941 when the REA [Rural Electric Association] came in as part of the Colorado Big Thompson Project.”

This photo of a Mexican-American family was taken in Denver sometime during the 1960s. 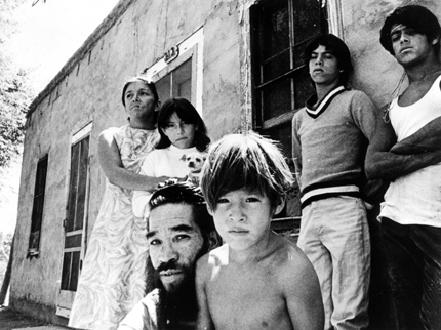 By the 1960s, most Colorado families lived in Denver and other cities along the Front Range. They worked in factories, shops, and offices. Many of them were newcomers, like this Mexican-American family.

“Characteristic of Denver [in 1949] have been well-defined areas of . . . racial segregation. Some fifteen thousand Negroes live in a section [of Denver] known as ‘Five Points.’ Most of the thirty thousand Spanish- speaking people inhabit an area shaped in a crescent along the bottoms of the Platte [River]. Within these same areas are compressed much of the substandard housing and health conditions [of Denver]. 88 per cent of Spanish-American homes are rated substandard, and 45 per cent of Negro homes. Infant mortality among Spanish-Americans is twice as high as the city average.“

The elderly couple in this photo are Mr. and Mrs. James Lamping. Their three grown-up children are standing behind them. 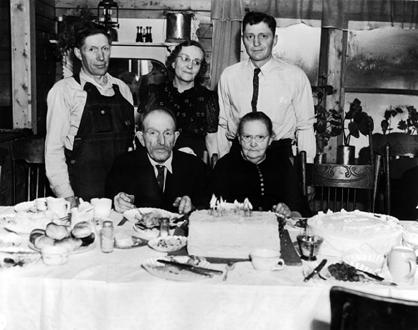 The couple in this photo were celebrating their 50th wedding anniversary. The photo was taken on December 12, 1938.

This photo was taken in May 1942. It shows a Japanese-American family traveling to the Amache Center near Granada. 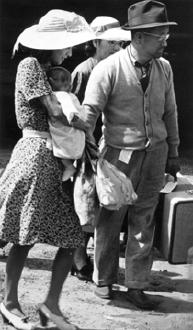 During World War II, the Untied States government forced Japanese-American families to leave their homes in California. This family was being relocated to Colorado, where they would spend the next three years at a camp on the eastern plains.

“It was ugly. They put us on a train and pulled the [window] shades down. They took us from Santa Anita [in California], down through the center of LA [Los Angeles], right by the Sears and Roebuck building, through the rail yards, and then up toward Utah, Wyoming, and then brought us back into Colorado. . . . They didn’t want us to look out. I don’t know why—maybe they didn’t want Americans to see us or us to see the Americans. I don’t know.”