What do these photos tell you about how their classrooms were like?

This is a fourth-grade classroom in Alamosa. The photo was taken about 1942. 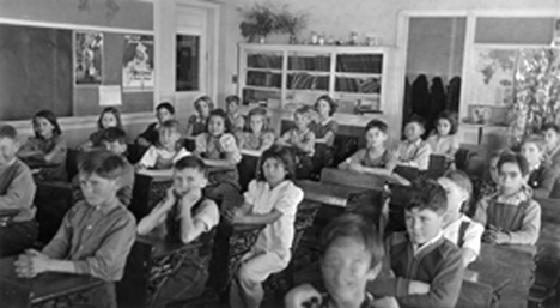 School classrooms of the 1940s looked much as they did sixty years before. Children still sat at wood desks with iron sides all lined up in rows.

This is the school library at Steele Public School in Denver. The photo was taken about 1930. 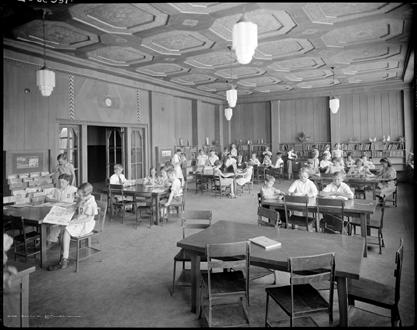 This well-lighted, elementary school library had many places for students to sit. But it had very few bookshelves or books. The lack of books may have resulted from the economic depression of the 1930s.

“My first year of teaching was in 1933-34. . . . The school had very few library books. This was a deplorable situation. To me—reading was as necessary as food. More than anything, I wanted to begin building a good library for the children so that they might have the joy and enrichment of good books in their childhood years. However, these were the depression years. Money was scarce, and one did not request school boards to purchase library books. School boards used money for the bare necessities.”

This is an eighth-grade girl's gym class at Central School in Alamosa about 1941. How are their gym clothes different from those worn in gym classes today? 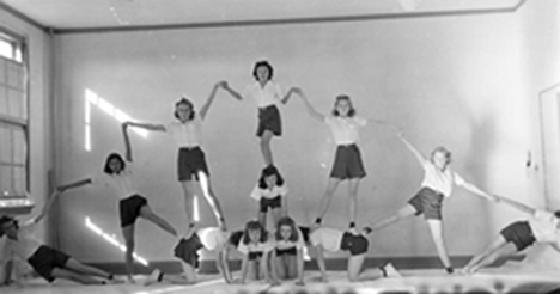 This is a science class at Central School in Alamosa. The photo was taken in 1941. How are science labs different today? 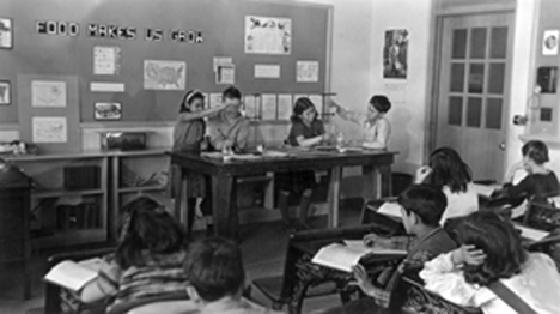 The four students in front of the room are doing a science experiment. The lab had very little equipment. It included glass beakers for holding liquid, a stand with a funnel cup, and paper towels. Most of the students were seated at desks watching the experiment.

“During the first week of school, the superintendent said he was very busy, and would I please take his physics class for a week. He managed to visit the class a short time each day. I had only one year of high school physics and it was the subject I least wanted to teach. However, I studied and did my best. At the end of the week Mr. Johnson told me he was still very busy and wanted me to continue to teach physics. . . . It didn’t take me long to figure out the superintendent didn’t want to teach physics.”

This is the music classroom at Central School in Alamosa, Colorado in 1941. The teacher is playing the piano while the children sing. 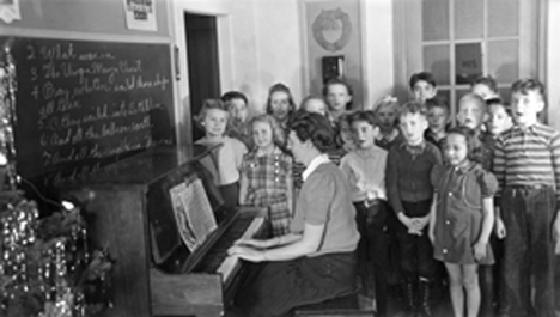 It is possible that the children were preparing for a special Christmas program. The left side of the photo shows part of a Christmas tree decorated with tinsel.

“In 1945, at the end of World War II, I was offered the position of Orchestra and Vocal Music Instructor of elementary, junior high and senior high school in Rifle, Colorado. . . . The music department consisted of an out-of-tune piano and five tattered song books. . . . At the end of the [first] semester, a young man came to teach science [to which she had been assigned], and I was sent to introduce music to fifth and sixth graders and organize girls’ and boys’ glee clubs. . . . In spite of these handicaps [scheduling problems and lack of music], our glee clubs were entered in the spring vocal contests. How those youngsters sang! We came home with top ratings.”