What do these photos tell you about Colorado children in the 20th century?

The young girl in this photo lived in Denver during the 1920s. She is playing on a sidewalk with some of her toys. The photo was taken about 1925. 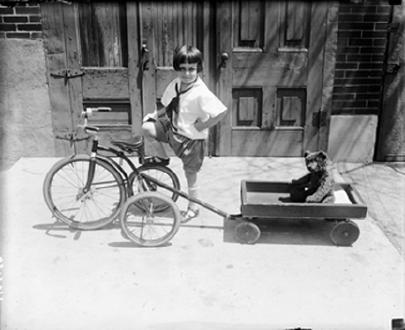 Children of the 1900s had more and better toys than children of earlier years; at least those from well-to-do families did. The girl in this photo has a modern tricycle and a teddy bear, as well as an old-fashioned wooden wagon.

"When I was a small boy [in the 1920s], not many kids rode bicycles, which were considered more of a means of transportation than a toy or a recreational vehicle. We had tricycles, coaster wagons, and homemade scooters. I don't even recall any bicycle racks at the elementary schools I attended."

These children were photographed in the town of Antonito, an Hispanic community in the San Luis Valley. 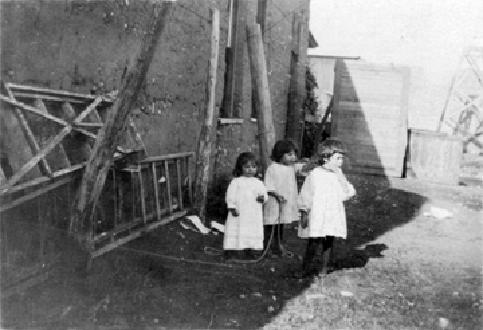 This photo of children in a small town in rural Colorado does not include tricycles and other modern toys. However, the girl in the middle is holding a jump rope.

"We never had any 'store' toys. We had to make our own playthings. Chips of wood became boats, sticks became spears, bits of old rope became lariats. We were able to make fairly respectable bows and arrows. We had a lot of fun with these things."

This photo was taken at Camp Nizhoni, a YMCA camp in Colorado. The building in the background is the camp lodge. 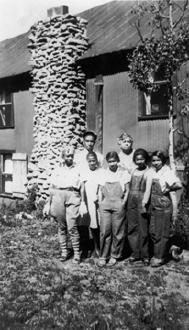 Children from poor as well as well-to-do families could attend this YMCA camp. The campers in this photo are young African-American girls.

"Young people today don’t play with rubber guns. You took a Model A inner tube, cut it around like a big flat rubber band, notched the end of a wooden lath board, and stretched that inner tube from the notch back to a close pin trigger. When the trigger released, the rubber band flew toward the target. The longer the barrel, the better the stretch. A knot in the tube produced a distinct sting upon the human target."

Source: Keith A. Cook, “A Whiskey Train and a Doughnut Day: Coming of Age on the Eastern Colorado Plains,” Colorado Heritage (Spring 1998): 5.

The young Chinese-American children in this photo lived in Denver. 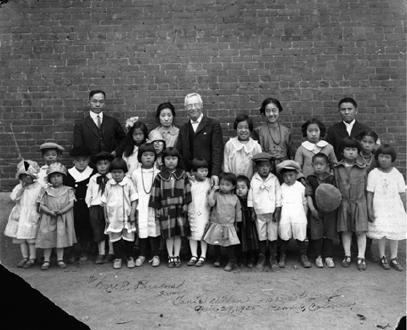 Chinese people lived in Denver and in Colorado from the earliest days of the gold rush in 1859. By the 20th century, children from many different ethnic groups lived in Colorado.

“. . . [The] large Chinatown of the city [Denver], extending from Sixteenth along Wazee and Wynkoop streets . . . was a busy mart, a growth of the steady immigration of the ‘Celestials’ to Colorado, where thousands had been, and still were, employed in placer mining around Central City, at Fairplay, Tarryall, California Gulch, and other gold camps. Chinatown was their supply source. Here were silk and clothing shops, stores of exotic atmosphere with shelves crowded with imports, fine teas, spices, drugs, and foods from China, tapestries, fans, laces, and there were many laundries. . . . The steam laundries hadn’t come [yet], and the Chinese had a monopoly on laundering.”

The town of Keota built this swing set for its young people. This photo was taken in June 1930. 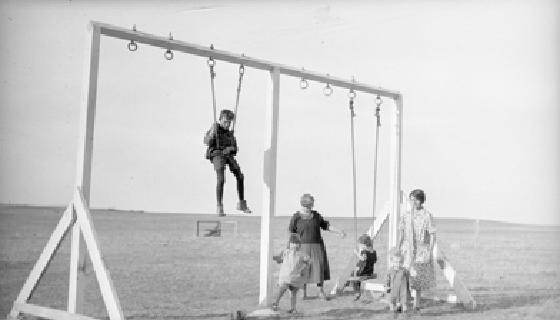 The playground equipment for children in rural areas of Colorado was simple and homemade. This swing set was made of wooden beams.

"The second year my sister and I decided we needed some swings and teeter-totters for each school. So we planned a program, a box supper and a small carnival.... We had a fortune teller, a fish pond, stunts, jokes and many other typical carnival games for entertainment...
"From the sale of the boxes and the carnival we took in about $70.00, which was considered a lot of money...
"Our father, with our help, put up the equipment for both schools. These were the first schools on the prairie to have playground equipment."

The children in this photo are swinging at a playground in Pioneer Park in Sterling. 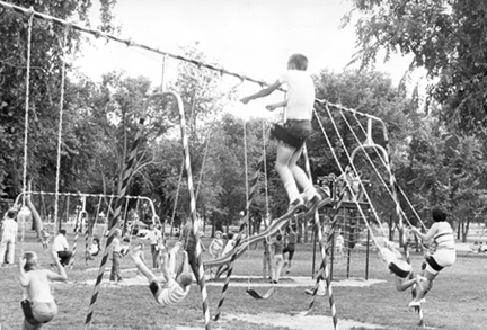 City children had playgrounds like this one in Sterling. How is this swing set different from the one in Keota in the previous photo?