What do these photos tell you about how Indians lived on these reservations?

The US government gave Ouray, the chief of the Tabeguache Ute band, a farm. This drawing shows Ouray’s house and other farm buildings. It was located near the present city of Montrose, Colorado. 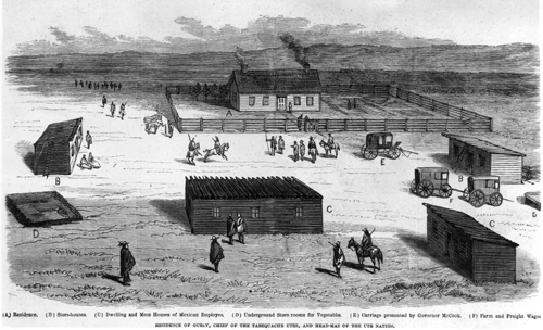 The US government gave Ouray this farm to set a good example. It hoped other Indians would want a house and out-buildings like Ouray’s. Most of the people on the Southern Ute Reservation did live in houses, at least in the wintertime. Most of them also planted crops. However, the land at the Ute Mountain Reservation was too dry for farming.

These are the buildings at the Ute agency at Navajo Springs. This is where the US government’s agent lived and worked. An Ute school also was located there. 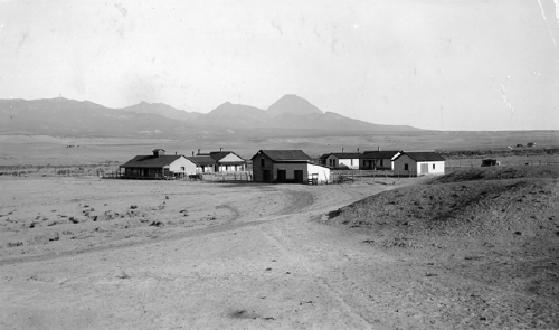 The government agents on Indian reservations were white men hired to help the Indians get used to reservation life. They provided the Indians with beef and other rations while the Indians were learning how to farm and raise livestock. Some agents also were teachers at the reservation schools.

This photo shows a house on an Indian reservation with a tepee in the back yard. 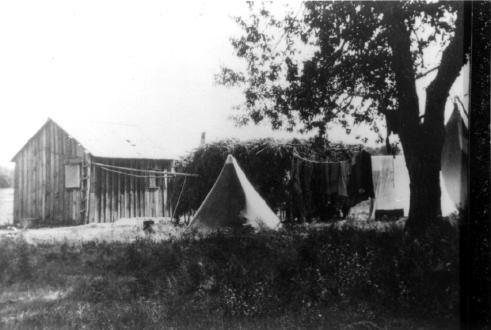 The government wanted the reservation Indians to live in houses. Each family was given an adobe or frame house. It took a long time for Indians to get used to living in houses. Many families continued to live in tipis and tents. Some lived in houses during the winter and tipis during the summer.

"Most of the homes are supplied with tables, benches, chairs, and cooking stoves. The great majority have beds while the remaining sleep on the floors....The homes have fireplaces and at least two windows."

These young people are setting out plants in a garden. They are students at the Southern Ute Agency school at Ignacio, Colorado. The school helped Indian boys and girls learn how to farm as well as to read and write. The photo probably was taken in the 1920s. 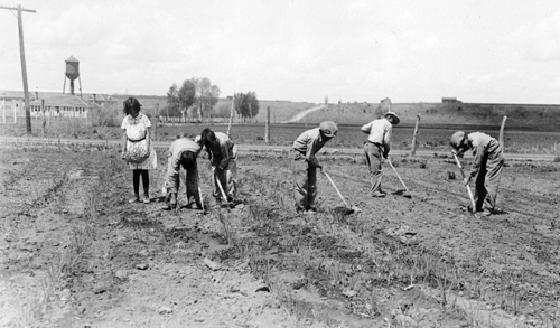 It was not easy for the Southern Utes to learn how to farm. They had always lived by hunting and by gathering seeds, roots, and berries. For many years, they lived partly by farming and partly on rations provided by the government agent.

"Even the smallest of us children began to learn to do things, indoors and out, as well as to read and write and figure. We watched the Mission people plough and harrow the soil in the garden, and when it was ready for planting we helped put in the seeds—radishes and lettuce and onions close together in long rows, and melons and cucumbers and pumpkins in hills, far apart. After the seeds came up, we helped with the hoeing, and we learned what plants were crops, and what were weeds and how to pull them."

The Indian men in this photo are taking care of sheep. The photo was taken on the Ute Mountain Reservation in the early 1900s. 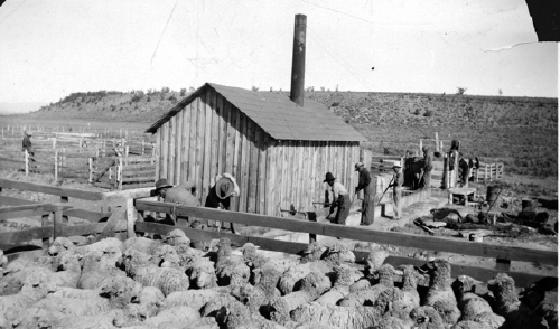 The Ute Mountain Reservation in southwestern Colorado was too dry for farming. The Indians who lived there made their living mainly by raising sheep. They followed their flocks over a large area, living in tipis or tents. They sold the wool and bought the things they needed.

"The Ute Mountain people do no farming, their land being arid with little or no water. Consequently these folk roam over a vast area with their flocks, living in tents and wickiups."