What do these photos tell you about the way ranchers would cut hay?

This photo shows men cutting hay in an alfalfa field. They are riding horse-drawn mowing machines. The photo was taken in June 1910. 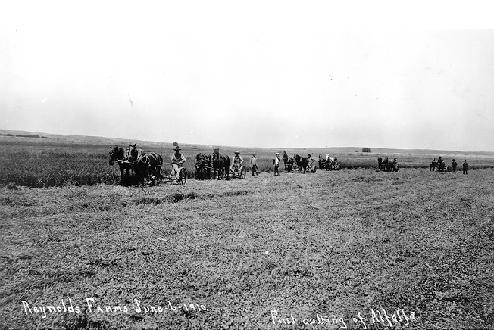 Hay has been an important crop in Colorado ever since the Gold Rush. Farmers cut hay from the natural meadows along the rivers and creeks and hauled it to the mining camps. Cattlemen cut hay to feed their livestock during the winter. Alfalfa was a good grass for making hay because it added minerals to the soil.

"Every farmer who has not a patch of alfalfa clover, should look at his neighbor’s, and the sight of its rich, green stems, ten inches high and full leaves at this early date, will convince him of its value. In two weeks it may be cut for hogs and even for horses."

The men in this photo are loading hay into a wagon. 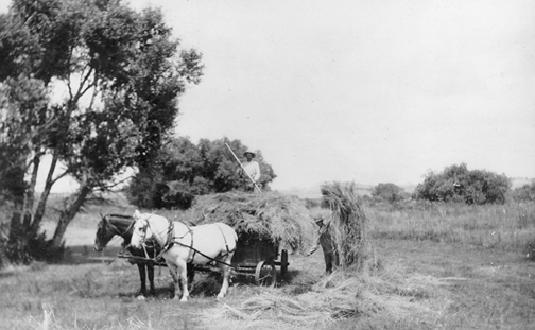 After the alfalfa, clover or other grass was cut, it was left on the field to dry. When the hay was dried or cured, men with pitchforks loaded it into wagons like the one in this photo. It was then hauled out of the field and stacked.

"We used to cut from 200-300 tons of hay on the river bottoms in the early days. Father would haul a load to Denver and trade it for flour. Often a load would bring but one sack of 100 pounds."

This photo shows ranchers stacking hay. The horses are pushing the load of hay up the wooden frame to the top of the stack. 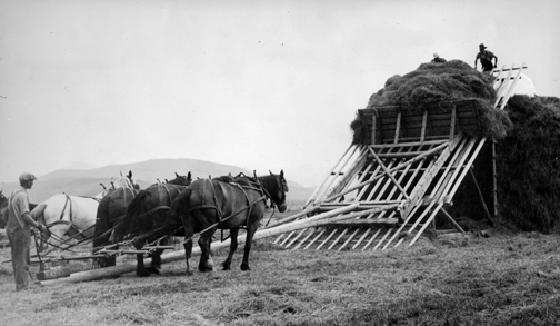 A field of alfalfa or other grass could be cut 2 or 3 times during the summer. The dried grass or hay was used to feed livestock during the winter. It was stored outdoors in haystacks like the one in this photo.

"Fanny [a horse] was used for plowing and cultivating the garden and for pulling the hay up on the stack.... Stacking hay was one of the big operations on the farm, requiring a crew of eight or ten men--two men for each wagon to load the hay in the field and two or three men on the stack.... A farmer took great pride in having his stacks uniform and straight and his hay still green and sweet-smelling after a winter in the field."

This photo shows ranchers using a wooden elevator device to stack hay. Some of the ranchers are driving two teams of horses to supply the power to lift the hay to the top of the stack. 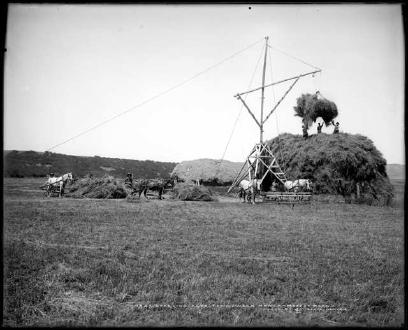 There are also people on top of the hay stack to spread the hay around on top. This photo was taken about 1908 on the Dawson Ranch, near Hayden, Colorado.

This photo shows a young ranch woman holding a rope connected to a hay lift. She is helping the other people on the ranch with the harvest of hay. The men to the left in the photo are driving horses to supply the power to lift the heavy hay. 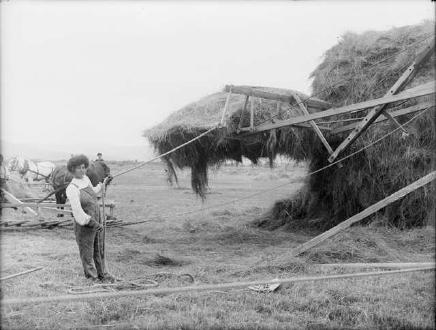 Notice the young woman's work clothes. It is likely that she did a lot of different kinds of chores, including heavy work, around the ranch. This photo was taken in about 1890.