What do these photos tell you about how cattle ranches looked like?

This photo was taken at the XYZ ranch near Trinidad. In front of the adobe house are seven ranch hands or cowboys. One of them is wearing an apron. 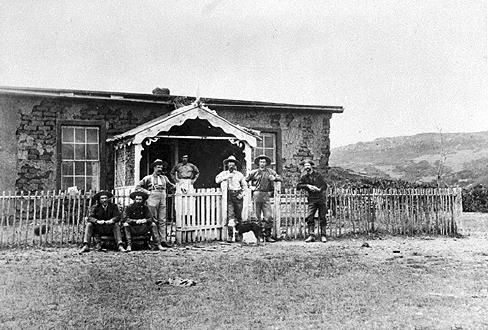 Raising cattle was mainly men’s work. There were more men than women on the cattle ranches of Colorado. As you can see in this photo, sometimes men even served as cooks.

"I started to work [at age 21] for Jared L. Brush July 15, 1882, and continued for four years. He employed from eight to fifteen men. [At] certain times of the year, [he] would have more men working than at other times--and I was one of the cow hands. . . . Mr. Brush would buy cattle and turn them in on the range to graze and feed until they were ready for market. I remember of him buying ten thousand head of yearling [one year-old] steers at Ogallala [Nebraska] and helping to brand them at Julesburg with the crew. I also remember the year I came here, 1882, that the LF ranch branded over eleven thousand calves during the summer."

This photo shows men and women standing near a bunkhouse on a Colorado ranch. 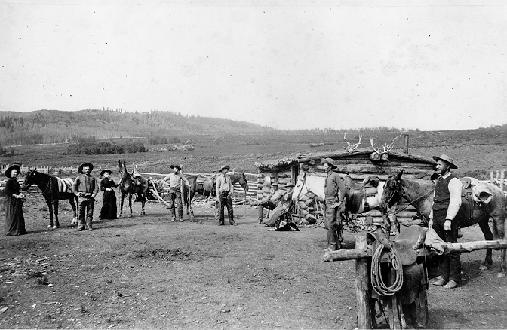 Women also lived and worked on cattle ranches. Most were either wives of the ranch owners or were ranch owners themselves. Other women worked as hired housekeepers and cooks.

”My mother . . . did everything, inside and out. She wasn’t the cowboy type, really, but she took care of the cattle and she would do the chores such as milk cows, take care of chickens. . . . [She] raised a monstrous garden. Canned an abundance of garden produce and fruits that were available. Well, it was an ‘able’ job—you got going as soon as you were able, and you went as long as you were able. The people of today would not do it. . . .”

” And, of course, the men of that day weren’t as many men [are] today. That wasn’t a man’s job to come in and assist with the meal. You [women] may work in a hay field all day . . . but you also came in and you got the meals, not just for you and your family [but] for whatever men there were—say, my father [and] any hired men they may have.”

The cattle in this photo are grazing on the plains. They are gathered around a pond. Behind the pond is a windmill used to pump water. 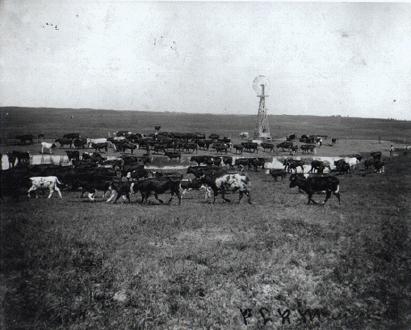 The grass on the Great Plains provided year-round food for cattle, just as it had for the bison. The grass remained nutritious even after it withered and turned yellow in the fall.

"This part of the country in the early days was a vast expanse of territory which contained no fences except at a few homesteads adjoining the Platte River, the cattle grazed quietly, chuck wagons bounced on their way to roundups, cowboys singing to their stock, calves being roped and the pungent odor of burning cow hair as it came in contact with red hot branding irons, this was the picture in 1882. It was a cattle country and the cattlemen were the persons of importance."

Cattle In a Holding Pen

This photo shows cows and calves in a corral. The rancher on horseback is inspecting the herd. 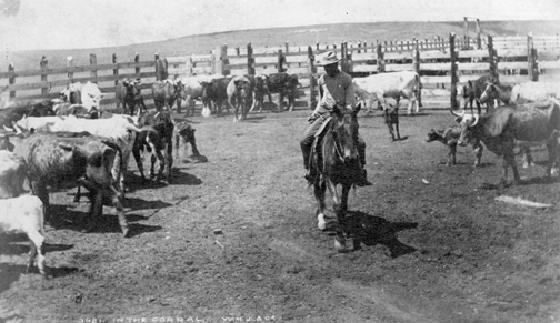 The first cattle in Colorado were Longhorn cattle driven up from Texas. These rugged animals could easily survive the winter on the open plains. But they produced tough and stringy meat. Ranchers later brought in European cattle breeds that produced more and better meat.

"I remember the old Longhorns. Put a bunch of them in the corral and you could hear a grinding noise from the rubbing of their horns. We took up Shorthorns later, while others went in for Herefords, and for a time there were quite a few Aberdeen-Angus cattle in the country."