What do these photos tell you about how farmers irrigated their land? 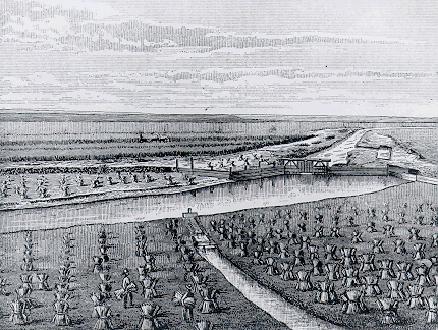 "The 'Big Greeley Ditch,' as it is called, is on the north side of the Cache la Poudre River. It is thirty-six miles long, with three to three and one-half feet depth of water, and is twenty-five feet wide on the bottom at its head, diminishing to fifteen feet at Greeley…. The cost of this irrigating canal was sixty-six thousand dollars."

This photo of an irrigated farm was taken on the Western Slope. The bridge behind the horse-pulled carriage crosses an irrigation ditch. Behind the ditch is an orchard of fruit trees. 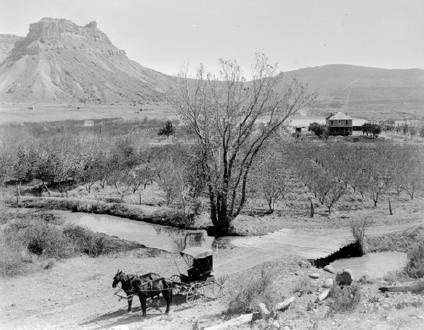 In the 1880s, the Grand Valley in Western Colorado became a major fruit growing region. The settlers planted fruit trees in irrigated orchards like the one in this photo. The water came from the Colorado, Gunnison, and other rivers along the Western Slope.

"The Del Norte [irrigation ditch is] the largest in the world. The principal canal is one hundred feet wide, and has fifty-six miles of constructed channel…. It delivers two thousand five hundred cubic feet of water per second, or one billion six hundred twenty million gallons every twenty-four hours."

Farmers who raised many different kinds of crops needed to irrigate in the very dry climate of Colorado. This farmer is irrigating his potato field near Hayden, Colorado. His potato plants are now in bloom. This photo was taken in about 1908. 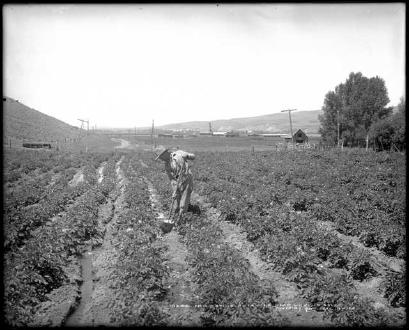 The farmer is using a shovel to change the flow of the irrigation water. That way, all the plants in the field would be watered. In the background you can see frame buildings and the farmer's windmill.

This farmer is standing in a field beside an irrigation ditch. The photo was taken about the year 1900 somewhere in eastern Colorado. 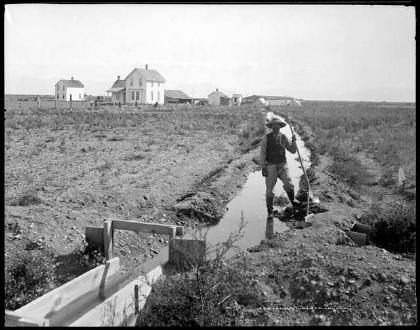 Men like the farmer in this photo had to make sure the water got to all the plants in the field. Keeping the water flowing to all parts of a field was hard work.

"The mainstay of every crop on the farm…was the irrigation ditch. Once the natural moisture left by melting snows and the spring rains had been sucked up by the greedy sun, the water from the Big Ditch must be brought to all the fields. No farmer could open his head gate whenever he saw the need for irrigating, nor could he use the water at will. The supply, not being limitless, was carefully apportioned so that every farmer "under the ditch," so the phrase went, would get his share, since the water was not free and each farmer paid for his share."

This farmer is opening the irrigation gate that lets water flow into his fields. The photo was taken in Routt County, Colorado about 1910. 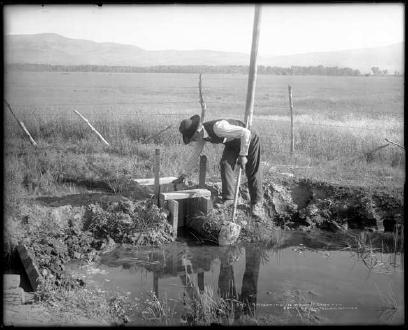 Each farm near an irrigation ditch received its share of water. Farmers took turns letting the water flow into their fields.

"The Number 3 ditch [at Greeley] was surveyed by an engineer named Nettledon. It was made by teams and scrapers, and was a slow process. Water came down the ditch in 1871. There were no reservoirs [for storing water], the water being taken directly from the Poudre river near Fort Collins. The colonists knew little about irrigation or the running of water and much was wasted."

This photo shows a man standing on a wooden irrigation flume. The photo was taken in about 1891, possibly in Cactus Valley in Garfield County, Colorado. The wooden flume carried water from its sources to farmers who used it to irrigate their crops. This flume bridges a shallow canyon to get water from one side to the other. 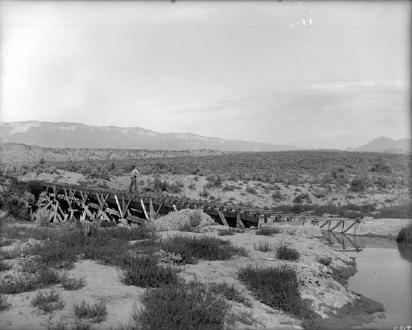 The flume in this photo is another example showing how much work was involved in getting irrigation water from its sources to the farmers and ranchers who used it. Notice the rocky, desert landscape in the photo's background. A ridge called the Grand Hogback is in the far distance.

This is a photo of work men with teams of horses. They are laying wooden-stave pipes for a water project along the front range of the Rocky Mountains. The photo was taken about 1900, somewhere near Denver. 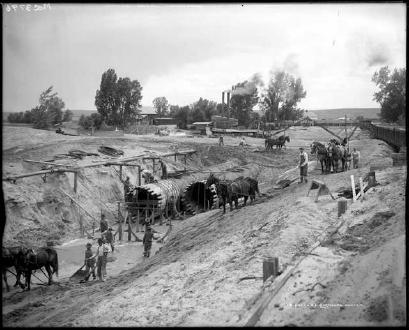 This photo suggests the great amount of work and often large projects involved in supplying irrigation water for farmers and ranchers in the dry climate of Colorado.