What do these photos tell you about the sports they played?

This is a photo of the Sterling, Colorado baseball team. The men's uniforms were long-sleeved shirts, pants that came to the knees, and long stockings. 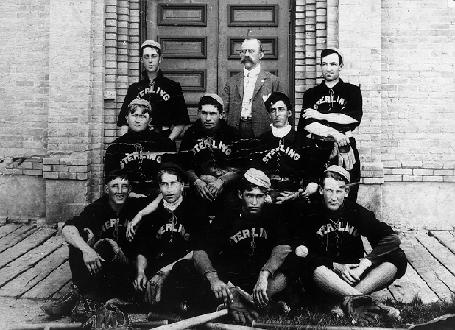 Baseball was a popular sport in Colorado. Many towns had a baseball team that played against teams from other towns. Some wore uniforms like those worn by the team in this photo. Often, groups simply got together at an empty field for a friendly game of baseball.

"For the first two or three years [of a new settlement] there was very little to do on the homestead in the fall and winter, excepting hauling water and gathering fuel. The rest of the time was spent in visiting and various form[s] of amusement…. At Wakeman's store, they had a croquet club. We had several baseball clubs and say, we could play ball in those days, hardly ever failed to make at least 20 to 40 tallies [runs] in a single game…. And did we yell at those games!"

"People came from every direction. We were not compelled to travel east or west, north or south, as we do now. No fences, no plowed fields, go where you pleased and how you pleased. People would come across the raw prairie, in wagons, in buggies, in buckboards, in carts, on horseback or on foot if they had no other way to go. Everyone came, father and mother, boys and girls, dogs and all. Everyone took "sides" in the game, especially the young women. . . . [They would] clap their hands and wave their bonnets at one of these games, when Curt Cauble missed the ball and fell down and ran over himself or when Sam Lomaster could not find the base, or when Ed Reynolds made a mistake and slid to a base over a cactus bed?"

This photo shows a group of men about to play the game of el chueco. The players are standing behind the two musicians. 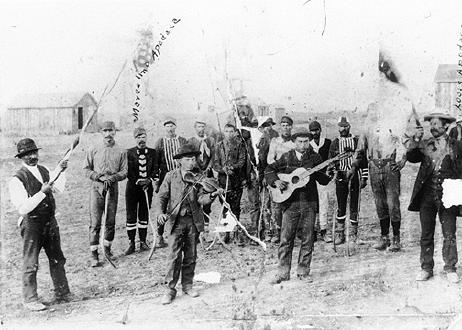 In southern Colorado, the game of el chueco was a popular sport. Players used a curved stick (el chueco) to try to knock a small leather ball across their opponent's goal line.

This is a women's basketball team from Sterling, Colorado. These young women attended Logan County High School (LCHS). The photo was taken in 1904. 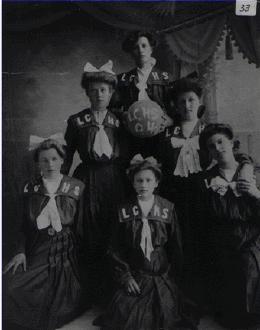 At one time only men played team sports. That was no longer true by the early 1900s, when this photo was taken. Basketball was then a new sport, and women quickly got involved. Women's high school teams, like this one from Sterling, played against one another.