What do these photos tell you about what they did for entertainment?

This photo shows a group of men and women having a picnic in a forest. 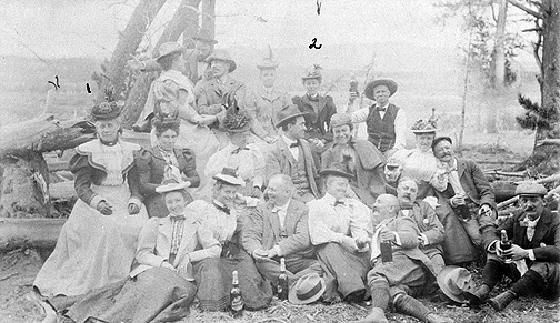 People who lived in Colorado in the 1800s found many ways to entertain themselves. They got close to nature by hiking, mountain climbing, and camping out. To raise money, churches put on lawn socials during the summer and box suppers during the winter. Dancing was another popular form of entertainment.

"Several families came from Eastern Kansas to Colorado to homestead that same year, and we had lots of good times together. We would all gather at one home for Sunday dinner. The men usually played cards while the women cooked and tended the children. The menu might be pinto beans, fried rabbit, roasting ears from the cornfield and wonderberry pie for dessert.... We always danced until daylight so we could see the wagon trails across the prairie to go home, as there were no fences or roads."

A Rodeo In Monta Vista

This photo was taken at a rodeo in Monta Vista, Colorado. The bronco riders was Alice Greenough, a woman rodeo performer. Alice is trying to stay on a bucking bronco named Endurance. 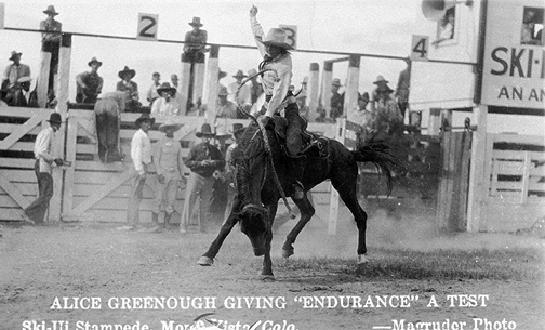 Rodeos have been a popular form of entertainment in Colorado since the late 1800s. Cattlemen especially liked to watch cowboys (and cowgirls) display their skills roping calves and riding bucking broncos.

"Among the ranchmen and in the smaller hamlets and villages, the chief sports among the men were rough athletic contests, riding bucking broncos, shooting at targets, etc., besides some gambling with cards and dice. During cold weather, dances would occur, which would be attended by people who would drive for 20 to 30 miles. The heads of households would bring their entire families. The children would play in one room while the adults would dance, chiefly square dances and reels like the Old Virginia reel."

"The host of the evening would generally furnish a keg of beer, but anything savoring of a rough house or drunkenness was extremely rare if it ever occurred.... Doubtless, the women had many quilting bees, tea parties and the like with which I was not very familiar, being chiefly out on the range."

This is the First Brigade Band of Greeley. The band members are posed with tubas, cornets, and other brass instruments. 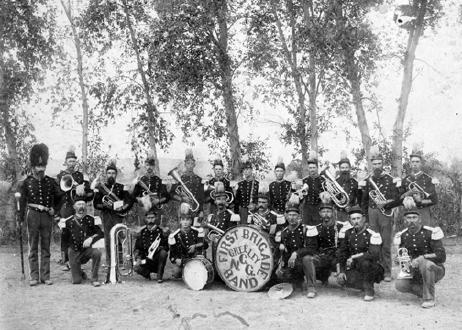 Listening to men's brass bands was another popular form of entertainment in the late 1800s. Nearly every town had a brass band. They marched in parades and played in city parks on Sunday afternoons.

“The arrival of a pretty, young and single female was of no small importance in the growing community [of Longmont]. On the scheduled day, the Grist Mill was shut down, stores closed, and as a result of much after work practicing, a creditable band composed of hopeful, young unattached males had been hastily put together. When the stage [coach] arrived bearing Miss Easton, she was welcomed by the loud, off-key blarings of the band and . . . smiling young men milling around her.”

This is a theater performance in Craig, Colorado. The photo was taken in 1894. 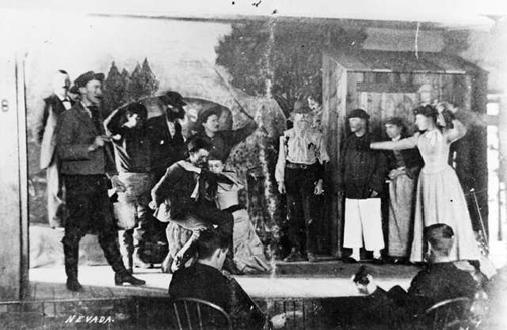 The people of Colorado in the 1890s had no movie theaters or television programs. But they could go to theaters to watch plays put on by local people. The actors from Craig in this photo were putting on a "western" play entitled "Nevada."