What do these photos tell you about what streetcars were like?

This was the first streetcar in Grand Junction. The photo was taken in 1887. 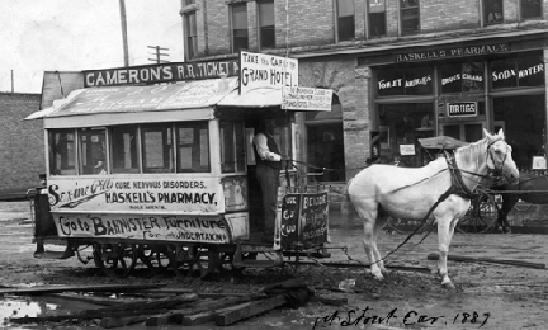 The first streetcars were horse-drawn vehicles. They were different from carriages because they ran on iron rails, which were laid down the middle of the street. The rails reduced the friction on the wheels. This enabled a horse to pull more passengers in a streetcar than in a carriage. It was cheaper transportation. Merchants also advertised on streetcars. The signs on the streetcar in this photo advertise Haskell's Pharmacy, Bannister's Furniture Store, and the Grand Hotel.

"The horse looked small for such a big top-heavy car. The wheels were small, too, and away under the car. The cars were heavy. I know for I watched the boys after school lay two pins crisscross on the track and wait for the car to go over them. The car wheel washed them flat on the iron track and made a little pair of scissors that wouldn't work."

The streetcar in this photo ran on 34th Avenue in Denver. It also was called a "gravity car." Can you guess why? 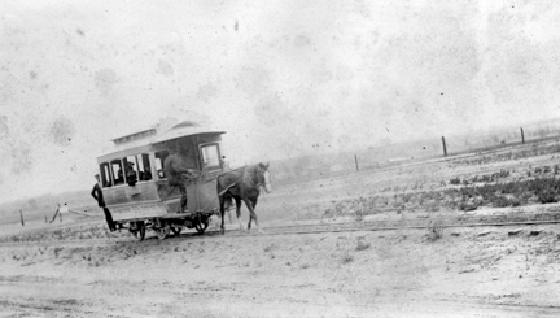 The route going east on 34th Avenue went uphill most of the way. The horse pulled the car uphill. The car was pulled by gravity going downhill. Look at the next photo to find out how the horse got downhill.

"As a child I went with my mother to call on a lady who lived on East 34th Avenue where one of the early gravity cars, drawn by horse, went up and down. It started at East 34th and Williams [and ran to] near where Clayton College is today. Then the horse was unhitched and placed in his stall on the rear of the car to ride down the hill."

A Horse Riding a Streetcar

This is a photo of the Cherrelyn Street Railway car in Denver. It was a gravity car like the one in the previous photo. 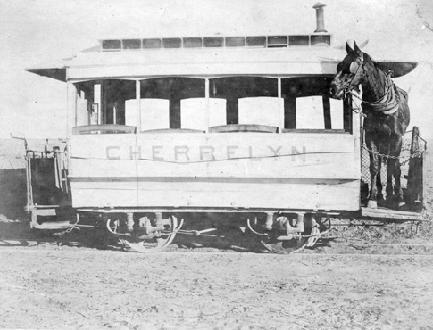 The horse pulled this car uphill between Denver and Littleton. The route back to the city was downhill. The horse rode back to Denver on the car's rear platform. The car was pulled by gravity.

"'What is a gravity car and where does it go?' asked Uncle Nelson.
"That's the car the horse pulls up the hill and when he gets to the top of the hill he climbs up on the platform and rides down. It goes on 34th Avenue to Colorado Boulevard. . . .
"We watched the gravity car come down the hill toward us. From where we stood we could see the horse's nose sticking out beyond the side of the car so we knew he was riding down on the back platform."

The streetcars in this photo are trolley cars. Take a closer look to see how these cars are different from horse cars. 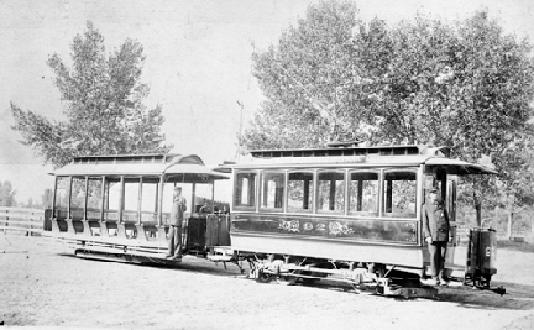 Trolley cars are powered by electric motors. The power was provided by an overhead electric line. A rod that extended from the top of the car to the overhead line conducted the electricity. The rod was connected to the line by a small metal wheel called a trolley-wheel. That's why electric cars were called trolley cars.

"When we began growing up there was the thrill of the "trolley ride." In those days some of the street cars were open with seats running across from side to side. There was a running board on which the conductor went to and fro to collect the fares. . . Every summer the Church would engage one of these cars for the evening at a stipulated price. The car would be draped with strings of colored electric lights, refreshments installed, the sale of which would help to defray the expenses, and away we would go riding all about town all evening. . . ."

Trolley Car On a "Roundabout"

This trolley car is parked on a roundabout. Can you tell from the overhead wiring what a roundabout is? 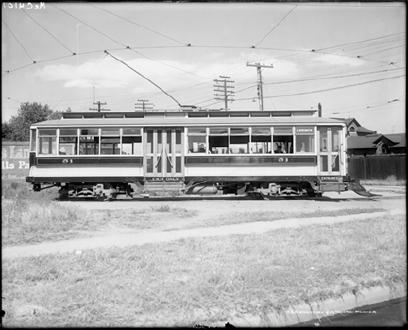 A roundabout is a section of track built in a circle to let trolley cars turn around. The overhead wiring in this photo shows you the size of the circle.

"When I was fourteen years of age, in 1879, we came to Denver. . . . When we arrived in Denver, a streetcar ran up Twenty-third street and was pulled by two horses. . . . In 1883 the streetcar system was extended to Seventh Avenue and Broadway. Later cable cars were installed (1888), and after a while regular electric cars were put in service."

The photo of this trolley car was taken at 15th and Champa streets in Denver. It was taken about 1915. 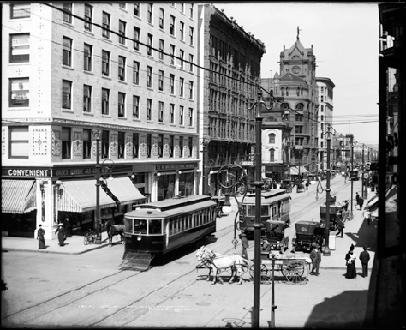 Electric trolley cars provided many cities in Colorado with cheap transportation during the early 1900s.

"When relatives of my mother came to visit, we had very simple ways of entertaining them. . . . We used to board this [trolley] car at about 32nd and Tejon, as this corner is known today, ride out to the end of the line, get off and walk across the prairie through the dust and the weeds, then get the Larimer Street car back, transfer and return to the starting point. And this cost 5 cents a ride."

The sign on this streetcar says "Seeing Denver." It is a "sight-seeing" car. 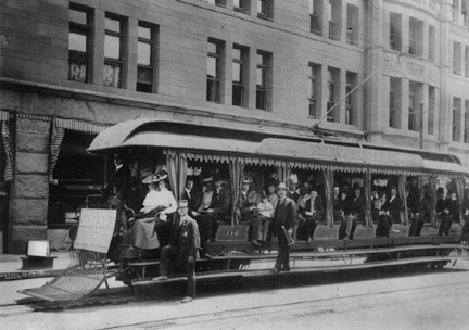 Open streetcars like the one in this photo were used to show tourists the sights in downtown Denver. The man standing on the running board of this car is the tour guide. He is holding a megaphone.