What do these photos tell you about the way early automobiles were like?

This truck delivered beer for the Adolph Coors Brewery located in Golden. 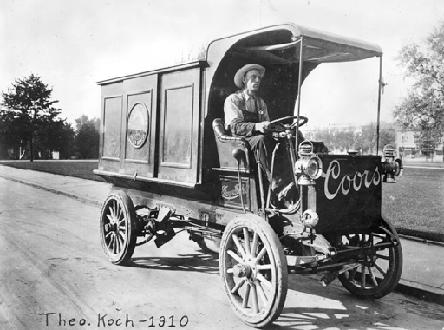 By 1910, gasoline-powered trucks were beginning to replace delivery wagons in Colorado's cities. This Coors delivery truck had solid rubber tires and used kerosene lanterns for headlights.

One Of Denver's First Automobiles

This photograph shows one of Denver's first autos. 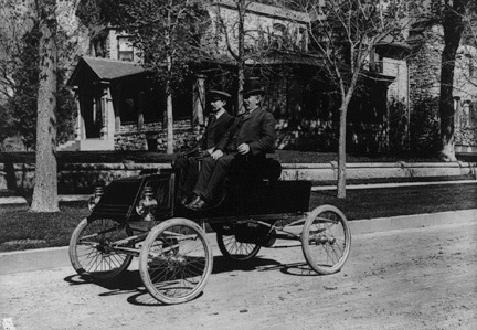 The first automobiles combined features of horse-drawn carriages and bicycles. The body and seats looked much like the box and seats of a buggy. The wheels were similar to bicycle wheels.

"For the first time in the history of Denver, an automobile was fined in the police court yesterday for driving along the streets of the city at a speed which endangered the lives of pedestrians. E.S. Matheson was the prisoner. He had been arrested on Sixteenth Street by Officer Asken, who said that the auto was making forty miles an hour."

This photo was taken during the 1901 Festival of Mountain and Plain parade in Denver. 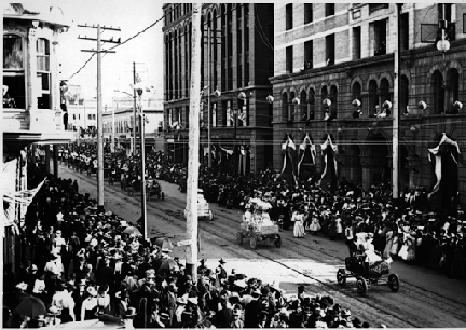 By 1901, gasoline-powered autos and trucks were beginning to replace horse-drawn carriages and floats in Denver's parades. The drivers in this photo decorated their autos with flowers and crepe paper, just as they used to decorate their carriages.

“August 1st Proclaimed a Legal Holiday by the Legislature. . . . For the morning of the great day a parade has been planned which will include prairie schooners and floats representing the early days of Colorado, with the pioneers en masse; decorated carriages and automobiles, and the city fire department. Prizes will be offered for the three best decorated fire wagons, automobiles, carriages and schooners. . . . The Gentlemen’s Driving and Riding Club, the Colorado Automobile Club and similar organizations will be invited to enter in the parade, which, as planned, will be one of the finest ever seen in this city [Denver].”

Auto Decorated For a Parade

This photo was taken in 1908 during the Flower Carnival in Denver. The vehicle is covered with white snowball flowers and green leaves. The women are wearing matching green and white gowns. 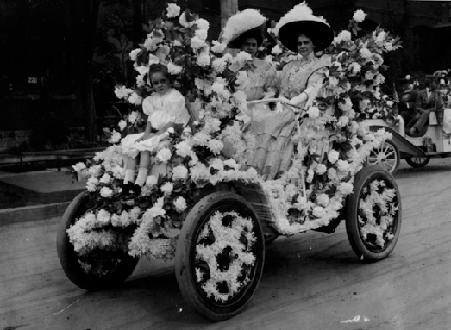 This is a good example of an early auto decorated for a parade. Automobile owners took part in many kinds of public activities. Members of auto clubs took part in parades of many kinds.

“One thousand automobiles to journey from Denver to Golden and through mountain parks on the morning of Sunday, March 7 [1915]. Such is the plan of the Denver Motor Club. . . . The first Sunday in March is set as the date for the great automobile excursion to Denver’s mountain parks. Sunday has been selected because it is felt that on no other day can Denver’s working people get away to enjoy the beauties of the trip.”

This photo shows four clergymen leaving a Denver church in an automobile. 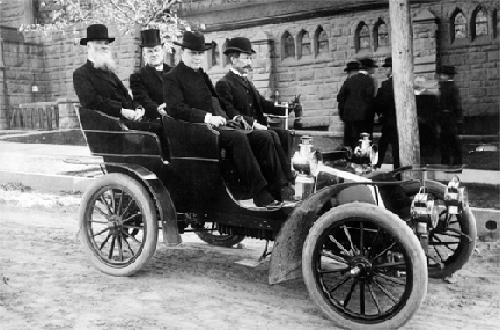 By the time this photo was taken, the autos used in Denver were much bigger than the earlier one shown in Photo 2. But this four-seater still looked more like a carriage than a modern car.

“If all the automobiles in Denver were loaded with people, there would be around 30,000 persons awheel. Right now, says the Denver News, there is one automobile for every fifty persons in the city, or 4,000 autos for 200,000 population, which gives Denver a considerable edge in auto population proportionately to size over other cities of the country. This census. . . means that in a few brief years the erstwhile haunt of the buffalo and coyote has become a vast speedway for automobiles representing an investment easily of $8,000,000.”

“It is likely that, taking Colorado Springs, and the country districts of Northern Colorado, where autos are particularly numerous, as well as Eastern Colorado, Pueblo and other towns, that Colorado can show more cars in proportion to population than any other state in the Union.”

"Stuck In The Mud"

The auto in this photo is stuck in the mud on a country road somewhere in Colorado. 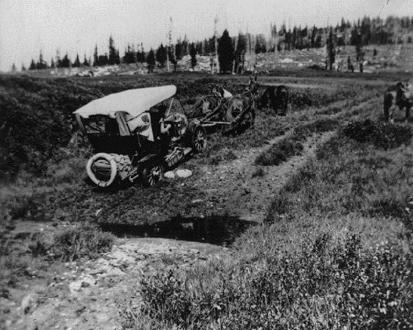 Many of the roads in Colorado were not suitable for auto use. They were built for high-wheel, horse-drawn wagons, not for low-slung automobiles that needed a hard surface. This photo shows a team of mules pulling the auto to solid ground. The widespread use of automobiles eventually led to the building of paved highways in Colorado and elsewhere.

“When my father died, which was in 1933, my mother ran for county superintendent of schools, and she was county superintendent for the [next] 20 years. . . . She had 25 to 30 rural schools, scattered all throughout the county. . . . She went in the wintertime [in order] to make the rounds of the schools. She was traveling all the time. . . . The first years in office she went mostly by herself. Then Mr. Purdy drove her for years. She went in that old Model A [Ford] . . . [and] she was stuck by the side of the road half the time. . . . Somebody would finally come along and dig her out, and she would go on. . . . That was nothing for her, to be off to the side of the road.”

A "Broken Down" Automobile

This family is pulling and pushing a broken-down auto on a country dirt road. 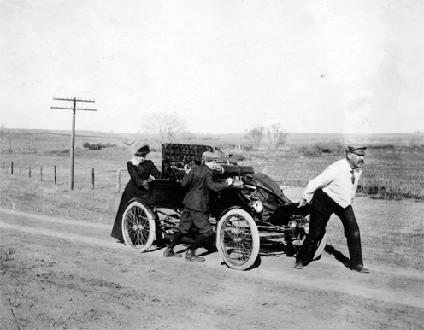 The first autos were not very reliable. They frequently had flat tires and mechanical problems that left passengers stranded.

“[After getting a teaching job] I could now go in debt and purchase a Model ‘T’ Ford, crank and all. . . . Roads and tires were poor and I had to learn also to patch inner tubes.”

"More than once I have to wrap my voluminous skirts around my knees, and wiggle under the car to drain a little gasoline to aid in the vulcanizing [repair of the rubber inner tube] process. But I first had to jack up the car, remove tire and tube from the rim with tire irons, patch the tube, place it in the tire, put the assembly back on the rim, and then on the jacked-up wheel before continuing a journey. Colorado eastern hamlets [small towns or villages] were far apart and my Model ’T’ never broke down anywhere near civilization.”