What do these photos tell you about the kind of schools city children attended?

This building in Boulder was Colorado’s first schoolhouse. It was built in 1860. 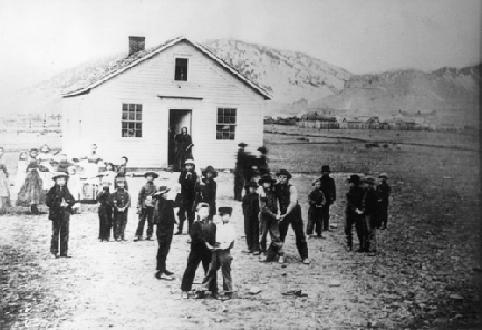 The first schools in most Colorado towns were one-room buildings like this one in Boulder. The new settlers usually began a school as soon as there were a dozen or so children of school age in the town.

This man remembered when schools were segregated by race in Denver:

"A building on 16th and Holladay Streets was also rented sometime in 1868; where only colored children were taught."

As towns grew into cities, schools had to keep pace. In less than ten years, the town of Pueblo had to replace its first school with a new and larger building. Growing towns also had to build new schools in new neighborhoods.

"The early public school was an aid to righteousness such as it does not now seem to be. The bell rang, followed by roll call, then reading of a short Bible lesson, next repeating or singing the Lord's Prayer or the singing of a well chosen song."

This is a photo of the Ashland School in Denver. It was built in 1874 in the Highlands neighborhood of Denver. 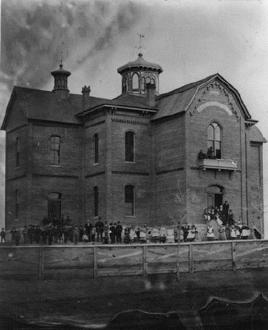 The Ashland School is a good example of schools built in Colorado’s cities in the 1870s. By then the cities were building large schoolhouses that had eight rooms or more. They usually were built of brick or stone.

"School athletics were practically nil and were individual only as far as the boys were concerned and were confined largely to 'Marbles,' 'Tops,' 'Foot and a half,' and 'Jacks.' Later, the girls stole the latter…. [Girls] were limited to such athletics as 'Charm String,' 'Autograph Albums,' and 'Bean Bags.'”

This is a high school built during the 1870s in Colorado Springs. 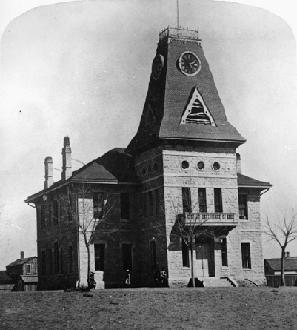 In the late 1800s, few students went to school beyond the 8th grade. Few rural areas and small towns even had a high school. Most high schools were located in large cities, such as Denver, Pueblo or Colorado Springs.

"The whole third floor of the Arapahoe Building was used by the High School. The large assembly room occupied the front of the building. There were two large classrooms and a small one partitioned from the hall--originally the boys' coatroom. Classes in Greek and French were heard here. The chemical laboratory was in the basement. The teacher performed the experiments while the class looked on. Grade pupils were often interested and peered through the windows, but sufficiently nauseous results [odors] sent them flying."

This is a photo of Centennial High School in Pueblo, Colorado. It is a brick and stone building with four floors. 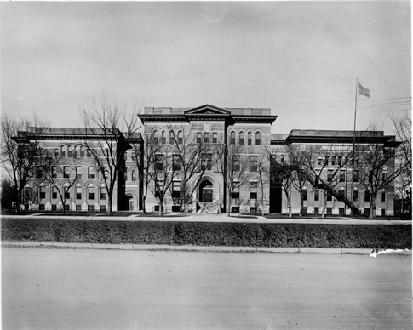 During the early 1900s, more and more students attended high school. Pueblo's Centennial High School was a large building that would hold hundreds of students.

"Most of the houses in Pueblo up to this time were either adobe or frame, with some fired brick of poor quality. The first school of any importance was adobe, with two rooms, on the site where the present Centennial High School now stands. An 8-room brick building was built there in the late 1870s and then removed to make way for the present high school building."