What do these photos tell you about what city school classrooms were like inside?

This is an elementary school classroom in the town of Wheat Ridge. 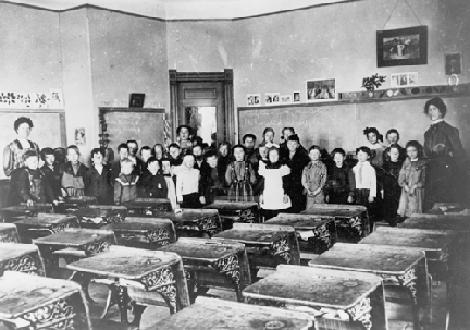 Large city schools had many advantages over the one-room schools of small towns and rural areas. Instead of homemade benches and desks, they had "modern" desks with iron sides. They had "graded" classrooms, where all the students in the room were about the same age. And nearly every wall was covered with a chalkboard. Students did more of their work on the chalkboard or blackboard in those days. Paper for homework assignments was scarce and expensive.

"According to my ideas of school Miss Peabody's First Grade was all that it should be. There were the little desks, five straight rows, seven in each row. The desks were made for the average size six-year-old to slip in, perch on the edge of the seat hinged to the desk behind and ease it gently down into position, or accidentally on purpose slip and slam it down. Those who were small for their age had plenty of room to wiggle about and sit on their feet. "

"Those who were large for their age found the desks a tight fit, but they wiggled just the same. The desks had fancy cast iron sides that were screwed to the floor. Each desk had a sloping wood top and a shelf underneath. "

The children in this photo are in kindergarten at a school in Grand Junction. 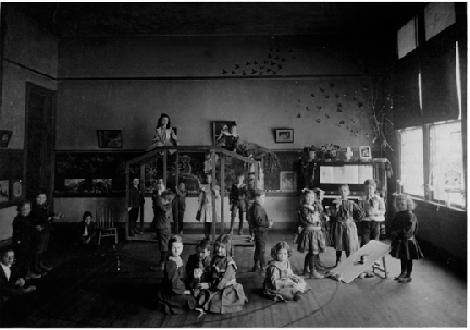 In the 1880s, kindergartens were still a new idea. The first kindergarten was developed in Germany only a few years earlier. The word "kinder" means "children" in German. Having a kindergarten was one of the advantages offered by schools in big cities.

"There were the narrow tall windows on one side of the room, and the big slate blackboards on the other. At the lower edge of the blackboard was a trough to hold the chalk and erasers. Below the trough was a narrow platform for the little children to stand on so they could reach the blackboards. The teacher’s table and chair stood on a wide platform and behind it were her cupboards for books, pencils, chalk, and erasers, the teacher’s lunch and maybe her hat and coat."

A School Play In Julesburg

The children in this school in Julesburg are about to put on a play. Can you guess what the play was about? 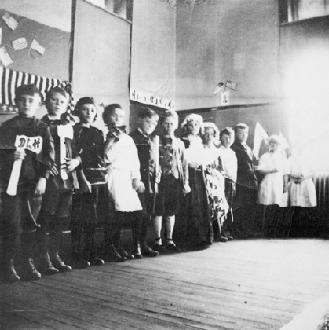 “The school had a few programs. The Christmas program was the most successful. . . . We could run off enough copies of our program for our audience. After the old sheet curtains were open, the little ones sang song, ‘a capella’ of course since we had no piano. Then the older students put on a one act play. We couldn’t come by a Santa Claus suit, so we had good St. Nicholas who was easy to dress in a flowing robe and a bishop’s miter.”

This photo was taken in the library at Denver's East High School. The students in this photo were busy selecting and reading books. 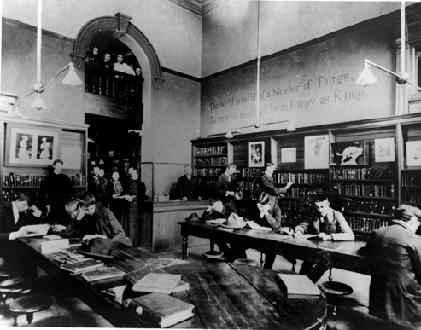 Big city high schools were much better equipped than elementary schools. Schools like East High School had a library, science laboratories, and an assembly hall. The school in this photo was the original East High School. It was built in 1889 and torn down in the 1920s. Then Denver built a second and more modern East High.

"The whole third floor of the Arapahoe Building was used by the High School. The large assembly room occupied the front of the building. There were two large classrooms and a small one partitioned from the hall-originally the boys’ coatroom. Classes in Greek and French were heard here. The chemical laboratory was in the basement. The teacher performed the experiments while the class looked on. Grade pupils were often interested and peered through the windows, but sufficiently nauseous results [odors] sent them flying."

This photo was taken in a classroom at Golden High School in the city of Golden. It shows teachers lined up along one wall. 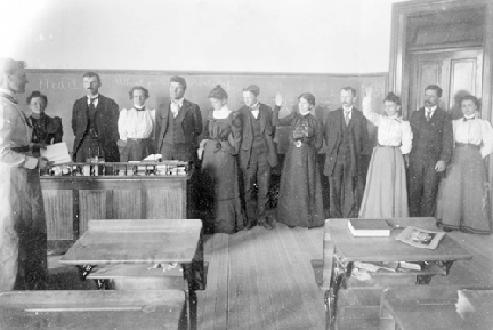 By the late 1800s, most teachers in elementary schools were women. That was not the case with high schools. Of the twelve teachers in this photo, six were men.