What do these photos tell you about the different services that were available in cities?

This is a photo of the Leadville police force. The photo was taken in 1878. 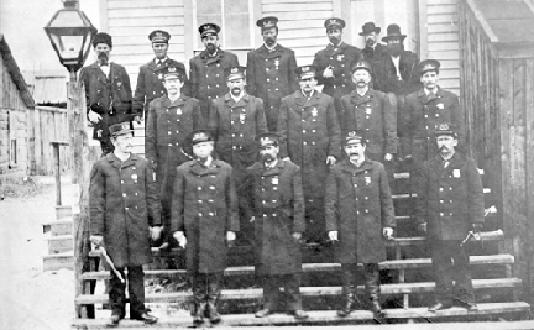 Small towns in Colorado had a town marshal who was hired to enforce the laws. They wore badges, but few had uniforms. A city like Leadville had more than twenty men on its police force. They wore uniforms and were well equipped.

"Mr. Dillon was with the police force and knew all that went on in the jail. He had several narrow escapes while working at the jail. On more than one occasion he risked his life to capture a prisoner trying to make his get-away. The jail was an adobe building. . . . During the time Mr. Dillon was on the force he held many positions, for a long time he was Night Captain, and at the time of his death, held the position of turnkey at the county jail."

This is a barbershop in Colorado Springs. The barber next to the window is shaving a customer. 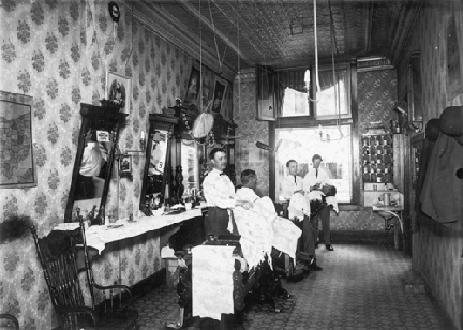 Barbershops in the late-1800s were popular gathering places for men. Many went there to get shaved as well as to get their hair cut. The rack at the right of this photo is filled with shaving mugs.

"The best barber in town [Pueblo] was a Negro by the name of John Mumford and he was kept busy most of the time, but especially on Saturdays, when the whole town turned up for a weekly shave and sometimes a haircut. (I mean the males)."

These men are firemen for the city of Grand Junction. They were the city’s first paid or professional fire fighters. 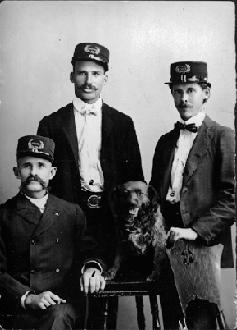 Most towns in Colorado had volunteer fire fighters. Merchants, laborers or miners ran to the fire station when the fire bell rang. Growing cities like Grand Junction needed full time fire departments. Professional fire fighters like these from Grand Junction wore uniforms and were paid a salary.

"The early equipment of the [fire] department consisted of a large hook and ladder truck that had originally belonged to Denver, but had been bought by the Pueblo department. The equipment was most unwieldy, being too heavy for the men to haul, and not being equipped for horses. Hose company No. 1 was considered the best of all companies, for it was to this company that the boys from the better families belonged. "

"There was a great deal of rivalry between companies, and many elaborate balls were given by the companies. Those balls were usually held in the Chilcott Hall, and were gala events. The uniform that the firemen wore to these social gatherings was composed of black doe skin pants, white flannel jackets, which were elaborately trimmed with blue. "

A Denver Fireman In Action

These firemen are rescuing a woman from a burning building in Denver. The photo was taken about 1915. 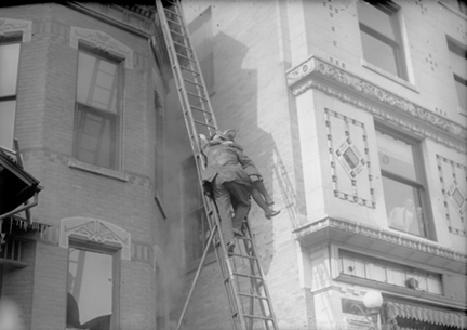 The tall buildings in big cities presented a difficult challenge for fire fighters. They needed special equipment and years of training to protect the people of their city.

"Much of the social life centered around the volunteer fire companies. As I recall, at one time there were four different hose companies. . . . We sometimes had state fireman’s tournaments. Our hook and ladder company was usually tops, largely due to the fact that we had a little chap, Tommy Ziegler, who could climb a ladder faster than anyone else. He was small, muscular and quick. For many years he was a druggist."