What do these photos tell you about who provided health care for city people?

This is the staff at the Place Sanitorium in Boulder. It took care of people who had a lung disease called tuberculosis. 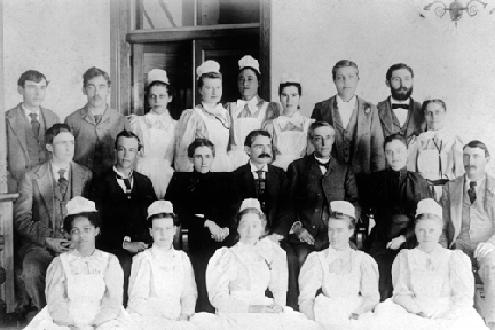 Tuberculosis was by 1900 the leading cause of illness and death in the United States. Having no sure way to cure this disease, doctors recommended fresh air, sunshine, and healthy food as the best treatment.

"Colorado is overrun with invalids. The few well-managed places where they can stay are crowded and have long waiting lists. It is seldom that the patient is fortunate enough to be in the ideal position of having his family or any member of his family with him to make a home in the climate ordered."

This is the men’s ward at the Denver General Hospital. The photo was taken in 1907. 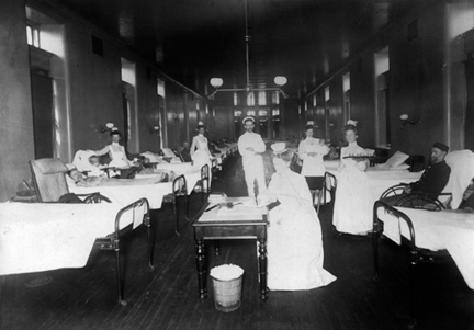 Regular hospitals in Colorado took care of local patients. The Denver General Hospital was that city’s largest hospital. It was a public hospital run by the city of Denver.

This woman describes her grandfather’s job as a nurse in a small pox hospital:

"Grandfather had other ways of earning money in Colorado Springs, besides cooking. Grandfather told me at one time he was hired as a Pest House Nurse, and worked there, I believe, during 1901 and 1902. The large wooden structure, known as the “Pest House,” was a place for the isolation of small pox patients....
"He said he cared for over a hundred patients and never lost one. He was not afraid of contagion. He might have had a light case at some time or had a natural immunity."

Source: Dorothy Bass Spann in Black Pioneers: A History of a Pioneer Family in Colorado Springs.

This is the Agnes Memorial Sanitorium, a Denver hospital for people who had tuberculosis. It was built in 1904 by Lawrence Phipps, a wealthy businessman. He named it in memory of his mother, Agnes Phipps. 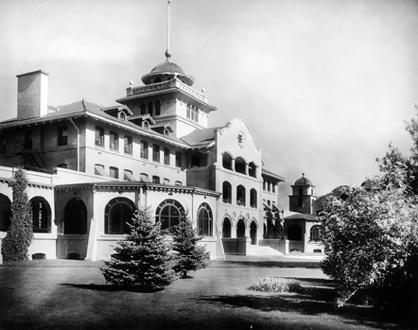 "No wonder Colorado was a land of promise toward which tens of thousands turned their faces. . . . In this hegira [flight from danger] journeyed hundreds of penniless Jewish sufferers whose emaciated faces and hollow cheeks and hacking cough were sadly eloquent of close confinement in crowded tenements [in the east]."

Sun Porch At a Sanitorium

These people are sitting in the sunroom or porch of the Agnes Memorial Sanitorium in Denver. 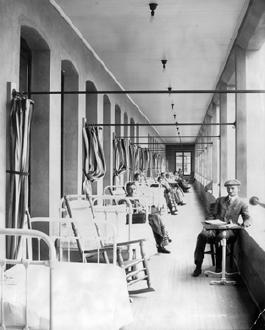 Doctors recommended fresh air, sunshine, and healthy food as the best treatment for tuberculosis. Places like the Agnes Memorial Sanitorium kept their patients on porches or outside as much as possible.

“Denver and Colorado Springs are of course famous resorts for persons with weak lungs, but one need not have weak lungs to feel the tonic effect of the climate. Denver has little rain and much sunshine. Her winter air seems actually to hold in solution Colorado gold. My companion and I found it difficult to get to sleep at night because of the exhilarating effect of the air, but we would awaken in the morning after five or six hours’ slumber, feeling absolutely lively.”

This photo was taken at the Woodmen of America Sanitorium, which was located north of Colorado Springs. The patients lived in the tents shown here, even during the winter. 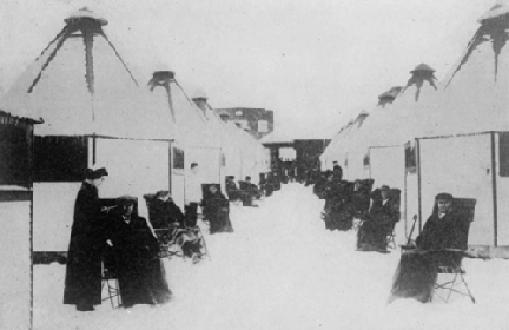 Tuberculosis patients were kept out in the fresh air treatment during winter as well as summer. The people at the Woodmen of America Sanitorium slept outside in tents during the winter.

"All the patients are required to sleep in tents, and will have to sleep out of doors all winter, no matter how cold the weather. This regulation seemed a little severe when the plan was outlined, so a small stove was placed in each tent. The object of the institution is to get the people of moderate means, who come here for their health, and who are compelled to live in unsanitary quarters downtown, in bad air, and work indoors, out into the open, where they will have a chance of recovery. There are plans at the sanitorium now for a barber, a shoemaker, a tailor, and other tradesmen."