What do these photos tell you about how they used railroads?

This crowd is celebrating the first run of a new locomotive. The photo was taken at Denver’s Union Station in May 1927.

The 1920s was the Golden Age of the railroads. Most people still traveled long distances by train. Most goods shipped in or out of the state went by railroad. Autos, busses, and trucks had only begun to give railroads serious competition. Even so, World War I, which ended in 1918, greatly stimulated the trucking industry. Before long, trucks would carry more and more freight.

“Twelve months [in 1917] ago the railroads of the United States handled practically all of the freight traffic without strain. Today, the enormous increase in troop and supply movements has created a revolution in transportation problems which has left a permanent impress upon this country. The commercial motor truck has come into its own, and where once steam reigned supreme, long lines of motor trucks now serve as feeders for tremendous stretches of the country.”

The passenger train in this photo has stopped at the railroad station in Pueblo. The photo was taken in 1937. 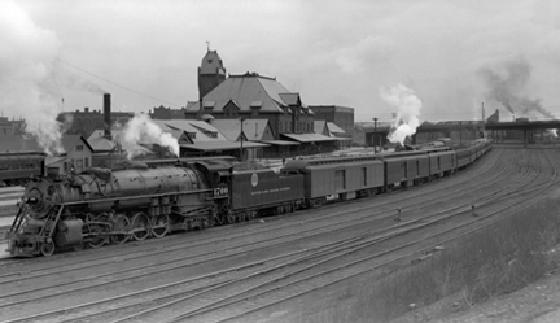 Railroad stations like Union Station in Pueblo were one of the largest and most important buildings in every city. It was a visitor’s first and last stop in the city. It often left a lasting impression.

This locomotive is stopped at one end of the Moffat Tunnel. 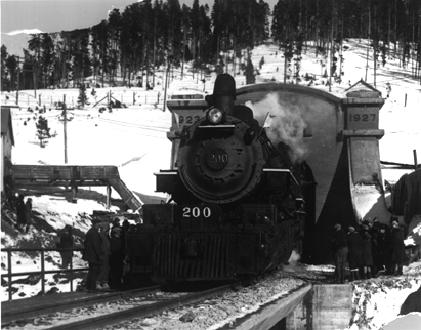 The Moffat Tunnel provided the first direct railroad route through the mountains west of Denver. Crews began digging in 1923. It was finished in 1927. Many skiers today take the train through Moffat Tunnel to ski at Winter Park.

“The mountains directly west of Denver form a barrier which has forced the main lines of transcontinental travel to the north and south, leaving Denver in a backwater. To overcome this handicap the late David H. Moffat, one of Denver’s early millionaires, started in to build the Denver & Salt Lake Railroad, better known as the Moffat Road. . . . The great difficulty [of building a railroad through the mountains] has always been the crossing of the [continental] divide. The city of Denver has now come forward with the Moffat tunnel project . . . for the purpose of helping the railroad company to build the tunnel.”

“It will be more than six miles long, and will penetrate the continental divide at a point almost half a mile below that now reached by the road, saving twenty-four miles in distance and over two percent in grade. The tunnel is now under construction, and will, when completed, be the longest railroad tunnel in the Western Hemisphere. The railroad company stands one-third the cost, while the city of Denver undertakes two-thirds. When completed, this route will be the shortest between Denver and Salt Lake by many miles.”

This is the lounge area of a Denver and Western Rio Grande dining car. The photo was taken about 1939. 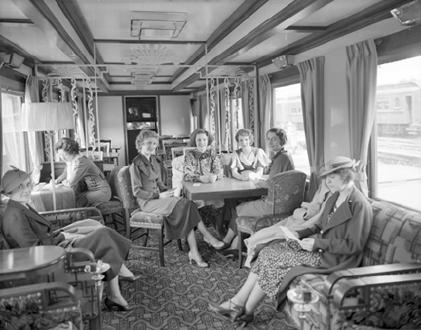 Going by train was a comfortable way to travel. The lounge area was a pleasant place to relax and enjoy a trip. 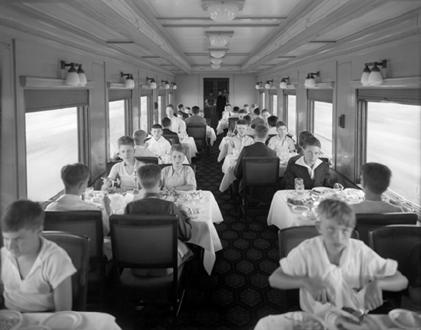 The kitchen where the food is served is located behind the doors at the rear of the car. Waiters are standing in the doorway.

The Galley In A Dining Car

This is the kitchen or galley of a dining car. 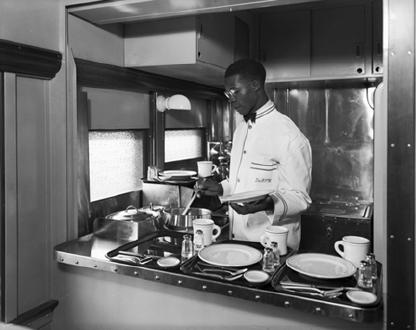 The man in the photo is dishing food from steel cooking pots onto plates on serving trays. Waiters in white uniforms carried the food to the tables. Cooks and waiters on dining cars usually were African Americans, as were the Pullman sleeping car attendants.