What do these photos tell you about why they adopted airplanes?

This United Air Lines plane had landed at Denver’s Stapleton Airport. This photo was taken in 1941. 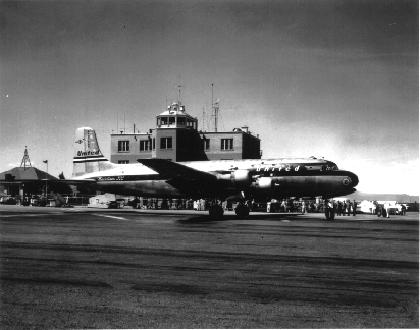 Regularly scheduled air travel was still relatively new when this 1941 photo was taken. United Air Lines began the first daily flights between Denver and other cities in 1937. Stapleton Airport was Denver’s major airport. It was named for Benjamin Stapleton, a mayor of Denver.

“The 14,000-foot peaks on the skyline also were hazards to early airline operations. Not until just before the war [late 1930s] did Denver get on the main skyways. Since then, however, aviation has spurted, and many feel the future of the city as a major air center is secure. . . . Even the moribund [nearly dead] Chamber of Commerce shows signs of rising to meet the challenge. . . . It has a hand in the recent transfer to Denver of a major portion of United Air Lines’ Chicago headquarters.”

This airplane was manufactured in Colorado by the Alexander Aircraft Company of Colorado Springs. 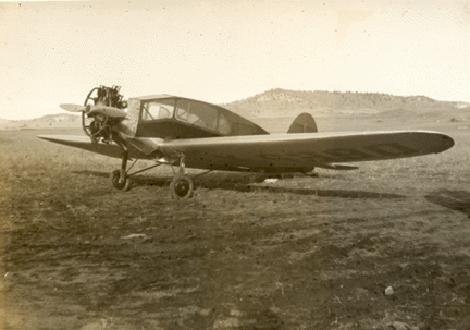 The Alexander Aircraft Company of Colorado Springs was one of the largest non-military aircraft factories in the United States during the 1920s.

"One area manufacturer of planes about that time was the Alexander Company in Colorado Springs, which produced the Eaglerock plane. These aircraft...had more than their share of crashes. It got so bad that people made crude jokes about them such as: They call the planes Eaglerocks because they fly like an eagle and fall like a rock. Their track record finally became so bad that, as I understand, the authorities in charge of flying regulations banned further manufacturing of the Eaglerock."

These DC-3 airplanes are parked at Stapleton Airport. The photo was taken in the late 1940s. 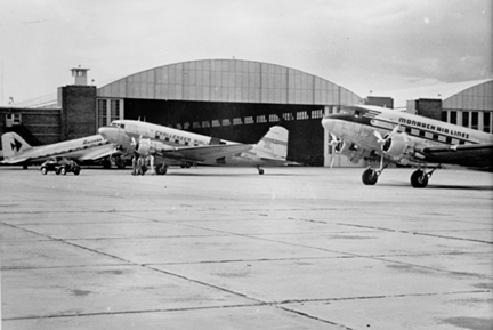 These two-engine DC-3 aircraft were among the most widely-used airplanes of the 1930s and 1940s. The names of the airlines on these planes are Monarch Airlines, Challenger Airlines, and Arizona Airlines. None of them exist today.

The airplanes in this photo are DC-3s owned by Frontier Airlines. 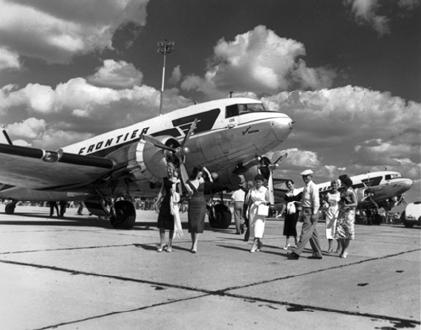 Frontier Airlines is the only Denver-based airline that has survived from the 1940s until today.

The woman in this photo is a stewardess for Frontier Airlines. 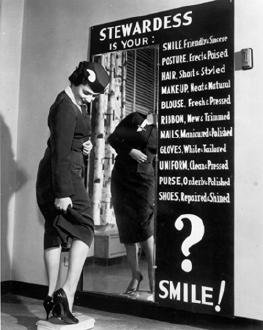 Stewardesses for airlines in the 1950s had to follow strict rules. The rules posted next to the mirror in this photo include the following: Is your SMILE Friendly & Sincere; POSTURE Erect & Poised; HAIR Short & Styled; MAKE-UP Neat & Natural; BLOUSE Fresh & Pressed; RIBBON New & Trimmed; NAILS manicured & Polished; GLOVES White & Tailored; UNIFORM Clean & Pressed; PURSE Orderly & Polished; SHOES Repaired & Shined. She is stepping on a scale because stewardesses could not be overweight.

"The physical examinations are fairly difficult to pass and the majority of airline companies demand that their stewardesses be registered nurses. No young woman will be employed by a large airline company if she wears glasses, has ever had mastoid or sinus trouble, has had any broken bones, or has ever undergone a serious operation…. The airline hostess must be free from scars or deformities, her feet must be in good condition, and she must have excellent posture. At the time she applies for work, she must be between 21 and 26 years of age. She should be at least five foot, two inches tall, but not more than five feet, five inches in height.
"Neither railroad nor airline companies will accept applicants who are married; nor will they permit their hostesses to continue in their employ after marriage."

Source: “Earning a Living as a Stewardess on the Railroads and Airlines,” in “Stories of Occupations,” Colorado Writers’ Project, Colorado Historical Society Library, Bulletin No. 3, (1940 Series): 2

The woman in this photo is preparing food for Frontier Airline passengers. 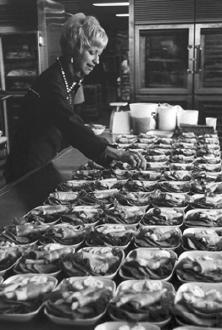 Hot meals were an important part of airline travel. Each meal was prepared on the ground, taken to the airplane, and kept warm in insulated cases.

This is a photo of Lowry Field in Denver taken during World War II. 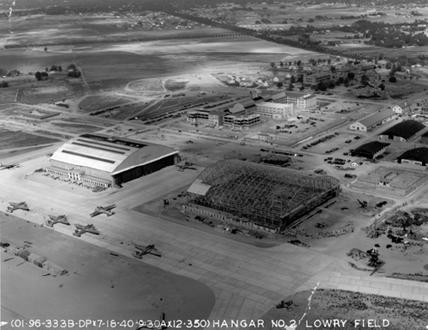 Lowry Field was a United States Army Air Force base during World War II. It was a training base for the crews of bombers.