Moving to Greeley from Denver to study early childhood education and starting her freshman year as a first-generation student, Alex Archuleta had a lot to learn about the college experience. She has an older sibling also attending the University of Northern Colorado to help her adjust to the changes here and there, but a resource she relies heavily on is her advisors. 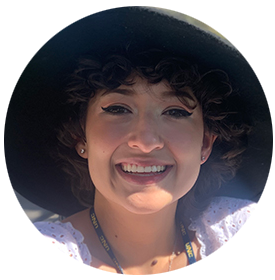 “I definitely like my advisors, I have two, and they’re so helpful. They help me navigate everything that I need to do,” Archuleta said.

With so many other students going through the same first-year challenges, figuring out what courses they need to take, for example, Archuleta thought her positive experience was worth sharing -- and she did this through designing a personalized digital game in a matter of hours.

Archuleta learned about the opportunity to design a game through her involvement with the Cumbres program. Cumbres is a scholarship and support program that prepares educators skilled in culturally and linguistically diverse practices inside UNC’s College of Education and Behavioral Sciences. Assistant Professor in the School of Teacher Education Matthew Farber, Ed.D., and Associate Professor in Applied Statistics and Research Methods William Merchant, Ph.D., reached out to UNC's Cumbres students and asked if they wanted to join in on a ‘Game Jam.’ Both Farber and Merchant run the Gaming SEL Lab, a lab that studies how games can support social and emotional learning (SEL) skills.

“A ’Game Jam’ is a rapid prototyping event,” Farber explained. “You don’t necessarily need to be a game designer or a coder to participate. Making games can involve coding, but not always. Mainly, it is about designing an experience for somebody to play through.”

Knowing how tech-reliant the world is becoming, Farber wanted to host a ‘Game Jam’ to give students, particularly those studying education, a chance to learn how to navigate systems.

“Games are the campfire of the 21st century. They’re all around us,” Farber said. “So, we need to understand how those systems work and how to think in systems is super important, in particular with teachers. There’s a strong overlap between designing a game experience and designing lessons because they can get increasingly more difficult and scaffold learning in both.”

Six students, including Archuleta, participated in the ‘Game Jam’ on Saturday, Oct. 2. The students were prompted to do one task: design a game to raise awareness of the situations Cumbres’ college students encounter when experiencing office hours. That's what led Archuleta to think about her advisors.

“I’ve been to my advisors’ office hours a couple of times, so I kind of incorporated that in my game,” Archuleta said.

For having little experience with software technology, Archuleta says creating the digital game was pretty easy and earned a Certificate of Participation.

“I really enjoyed it. It started as a blank slate, and you start writing passages of what you want in the game, then you hit enter, and it incorporates it, and then it keeps the flow of the game going,” Archuleta said.

Farber and Merchant had the students create their games through a web-based tool called Twine. Farber got the idea to include office hours as the prompt because he knows how intimidating that time can be for new students.

“Last year, I began to take time to explain to my students what office hours actually are. But I also wanted to know what else I could do. I started holding office hours in the University Center and told students they could get lunch and stop by. Before, my office was on the 5th floor in McKee Hall,” Farber said.

Farber and Merchant are still combing through the six games the students created. They hope the findings will help them and other faculty members understand the best way to provide support and connect with students. They then plan to continue this type of 'Game Jam’ to explore other systems that students navigate.

“To me, it’s a fascinating way to harness self-expression. What better way to understand what students are going through than by having them design playable experiences for others to go through,” Farber said.

Archuleta says she would participate in another ‘Game Jam’, calling it a fun way to learn about technology.

“Especially since the pandemic, I think a lot of kids of all ages are now learning off of technology and for my generation, we grew up on technology, so I think exposure to it is fairly vital just because that’s what’s out there in the real world,” Archuleta said.