See below for a recap on and photos from featured Bear Welcome events to welcome new and returning students back to the University of Northern Colorado campus for the 2019-20 academic year:

Above: UNC students part of the class of 2023 pose for the traditional class photo.

On Thursday, Aug. 22, students moved into on- and off-campus residences with the help of volunteers. UNC President Andy Feinstein was among those who volunteered in helping students and their families move them in to residence halls: 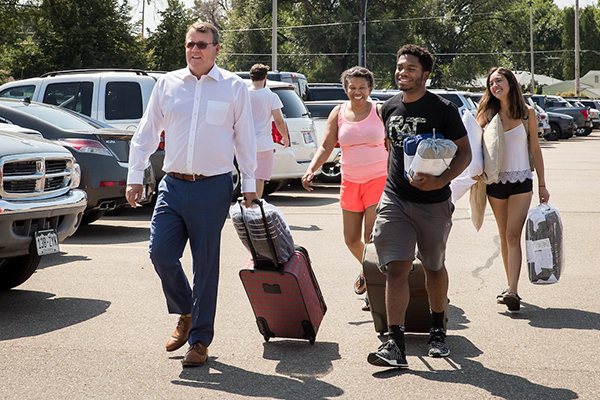 UNC President Andy Feinstein helps a student and family by carrying luggage to the resident hall. 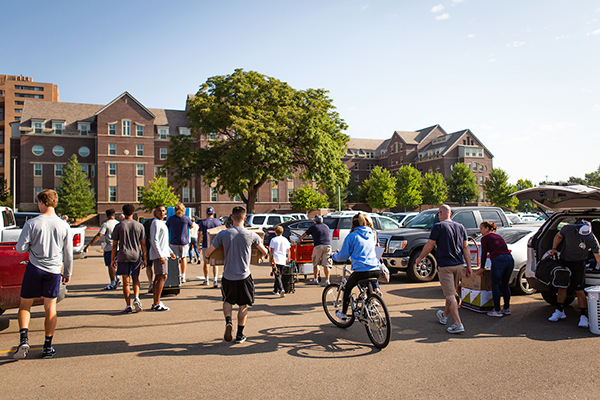 Numerous students and families moving into residence halls on the west side of campus. 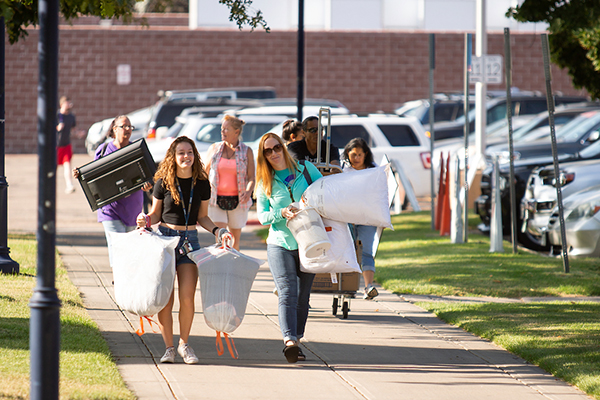 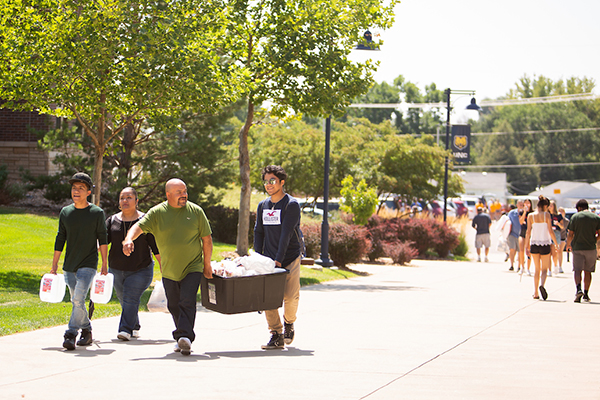 A family carrying a box full of items during move-in day. 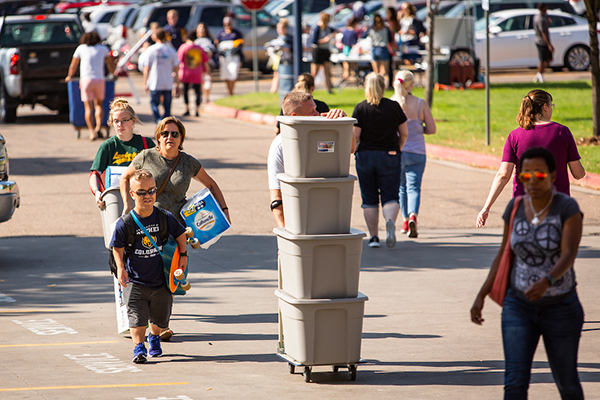 More students and families arriving and moving in to residence halls.

On Friday, Aug. 23, Feinstein and Student Body President Mika Tancayo welcomed new students to campus. The UNC Band and student-athletes helped teach the UNC Fight Song to those in attendance, and UNC alumnus Cristóbal Garcia ‘08 talked about the importance of finding your place at UNC and in the Greeley Community.

Watch a video recap of the Presidents' Welcome event:

UNC hosted the annual Taste of UNC fair on Friday, Aug. 23, at Turner Lawn. The event featured games, food booths and a DJ. 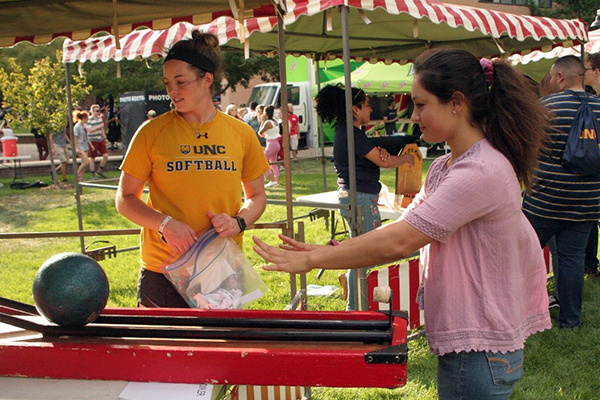 Megan Chang, a Musical Theatre major and second-semester freshman who transferred to UNC, played several games at Taste of UNC including one hosted by UNC softball players.

“Everyone has been so friendly here compared to my last school,” Chang said. “Plus, the fries are really good.” 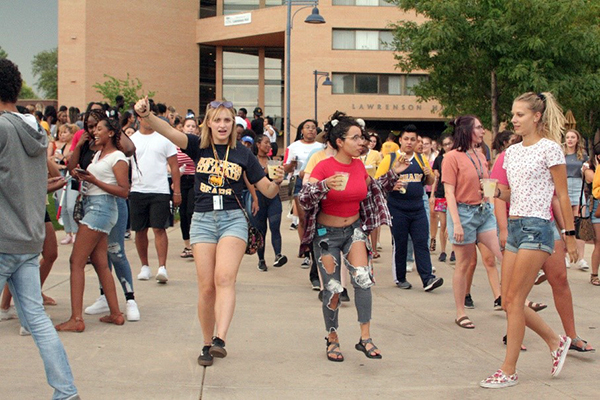 UNC students dance to the song "Cupid Shuffle" by Cupid outside of Lawrenson Hall at this year's Taste of UNC fair. 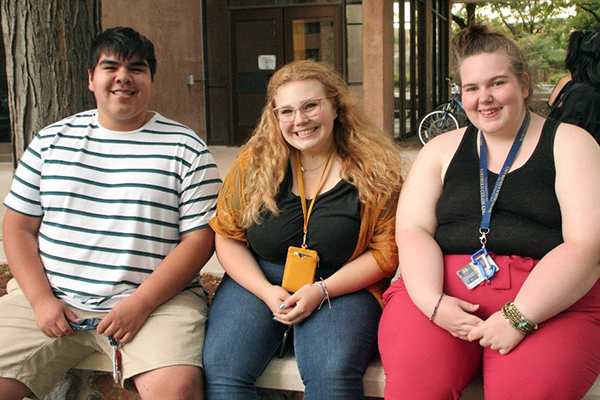 According to Hal Brown, director of UNC Dining Services, Tobey-Kendel and Holmes Dining halls were closed in order to serve the food outside. Dining Services partnered with the Student Support team, who helped organize activities for this event.

Students were given tickets for two entrées and three sides and had a variety of food options including hotdogs, sandwiches, fries, drinks and desserts from UNC’s Pie Café, located on the first floor of Campus Commons.

“Taste of UNC getting new students in the community involved and lets them know how good the food is capable of being,” said Skylar Clemensen, a UNC sophomore majoring in English. “We got two entrée tickets, which could go towards tacos, foot-long hot dogs, pork sandwiches and condiments as well as three tickets for sides. I always look forward to the lemonade stand since that lemonade is amazing.” 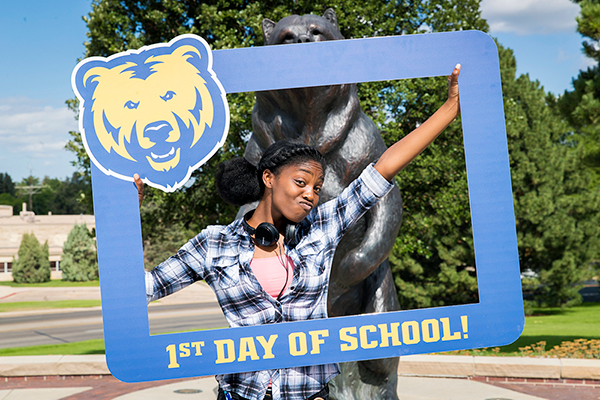 Rachel Retland, an Elementary Education major, poses in a large frame on the first day of school in front of the "Northern Vision" statue. She's also the cultural activities coordinator for the Marcus Garvey Cultural Center at UNC. 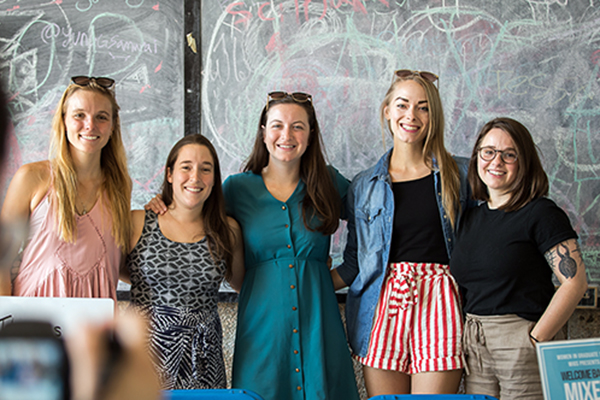 Students pose for a photo at the UNC Graduate School's New Graduate Student Orientation that was held on August 20. The orientation provided an overview of what to expect at UNC as well as an opportunity to meet other graduate students and staff. 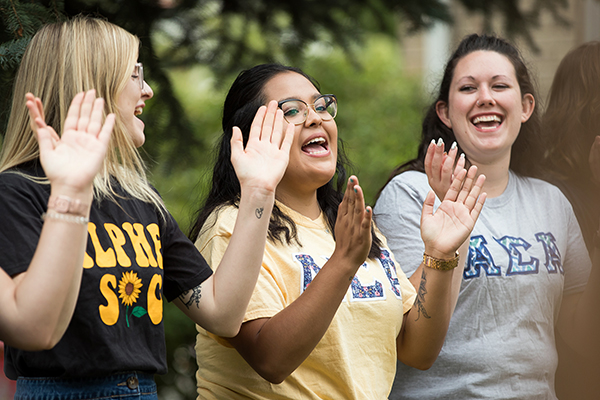 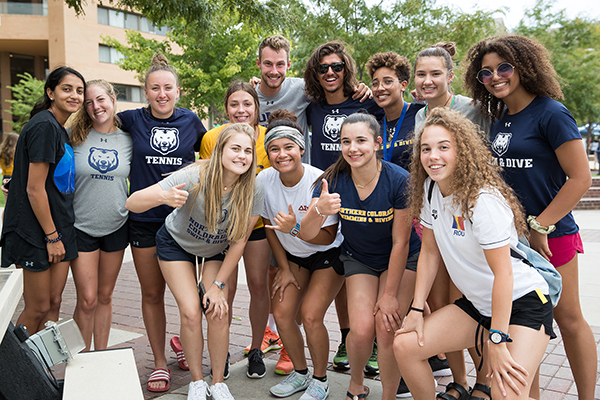 Student-athletes pose for a photo at an event. Be sure to visit the UNC Athletics' website. 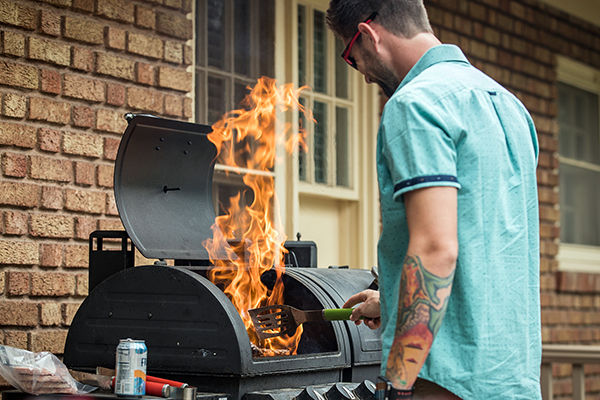 A member of UNC's Veterans Services cooking food at the center's Welcome Briefing and BBQ event on August 23.