What do these photos tell you about how Indians hunted after they had horses?

This painting shows Indians chasing buffalo on horseback. The hunter at the lower left is shooting an arrow at one buffalo. The hunter in the center is using a lance or spear. The picture was painted by George Catlin, an artist who traveled in the west during the mid-1800s. 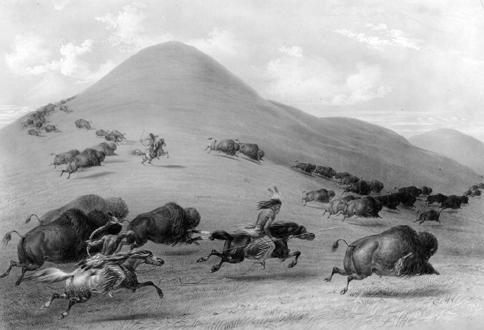 A hunter needed a special horse for hunting buffalo. It had to be very fast and not afraid to get close to a buffalo on the run. These “running horses” were very valuable. Men tied them up at night close to their tepees to keep them from being stolen by enemy tribes. A man might own 10 or more horses, but only one fine buffalo horse.

"Heavy as they were, the buffalo were fast and hard to kill. When a herd was on the run, it was like thunder rolling over the ground too fast and furious to stop. If a man’s horse stumbled, he might be trampled to death by the running herd."

This drawing shows two ways Indians hunted buffalo on horseback. The Indian in the center is chasing a buffalo to get close enough to shoot it with an arrow. The hunter on the right-hand side has stopped his horse to shoot with a rifle. 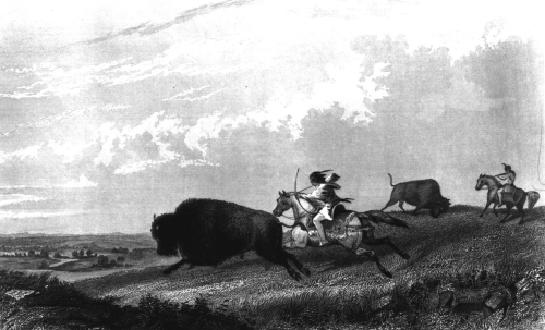 Standing Over The Kill

After killing a buffalo, the hunter had to remove the skin from the animal. The first step was to slit the buffalo's hide down its back. The hunter in this drawing is using his knife to do this. 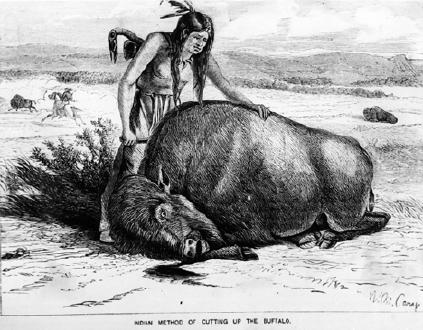 The hide was a valuable part of the buffalo. It was used to make robes, bed covers or tepee coverings. Hides also could be traded for other goods the Indians needed. Hunters were expected to share the meat they brought back with others in the camp. But they could keep the hide.

In this drawing, two Indians are skinning a buffalo. After slitting the hide down the back, the Indian cut it loose on both sides. Their horses are grazing in the background. 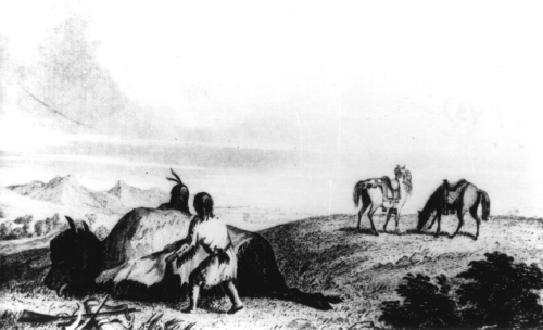 Indians used the buffalo hide to bring the meat back to camp. After pulling the hide free, the hunters laid it on the ground hair-side down. Then they butchered the animal, placing the meat on the skin-side of the hide. Then they wrapped up the meat in a bundle of hide, loaded it onto a horse, and returned to camp.

Hauling Hides On A Travois

The Indian in this photo is hauling hides on a travois. A travois is made of poles attached to a horse or dog. Indians used horse-pulled travois to haul heavy loads. 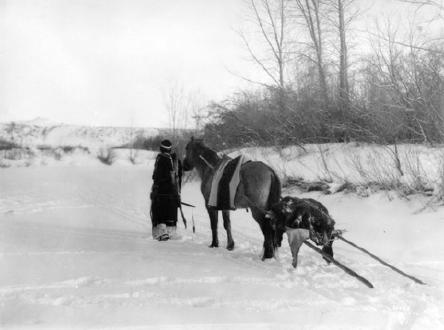 The American Indians invented the travois. It was a very useful invention. A horse could carry only about 200 pounds on its back. But with a travois, it could pull 500 to 600 pounds. The Indians sometimes used tepee poles for travois. But dragging the poles along the ground soon wore them down. They preferred to use shorter poles made of hard wood such as hickory or oak.