What do these photos tell you about the kinds of shelters these people lived in?

By the early 1800s, most Indians in Colorado lived in tepees. They were made of buffalo or elk hide and tall poles. The tepees in this photo were part of a Ute Indian village. 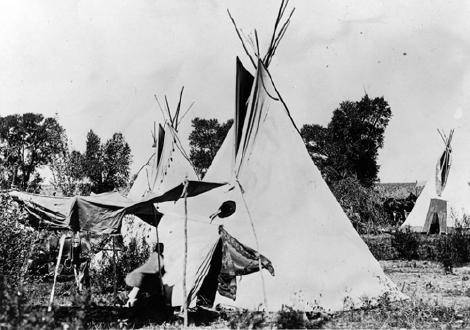 The plains Indians made tipis of buffalo hides. Buffalo hide was thicker and stronger than other hides. The Utes, who lived in the Rocky Mountains, killed fewer buffalo. Instead of buffalo hides, they used elk skins for their tipis. The tipi would require 10-12 elk hides. The hides were sewn together with thread made of sinew. Tipi hides were tanned and greased to make them waterproof.

"One who has never lived in a lodge [tepee] would scarcely think it possible for seven or eight persons to pass a long winter agreeably in a circular room, ten feet in diameter, having a considerable portion of it occupied by the fire in the center. Indeed, they are as comfortable as they could wish to be. I moved from a lodge into a comfortable log house, but again returned to the lodge, which I found much more pleasant."

The tepee in this village has a tripod in front made of three short poles. Indians placed blankets and other things on tripods like this one to keep them off the ground. 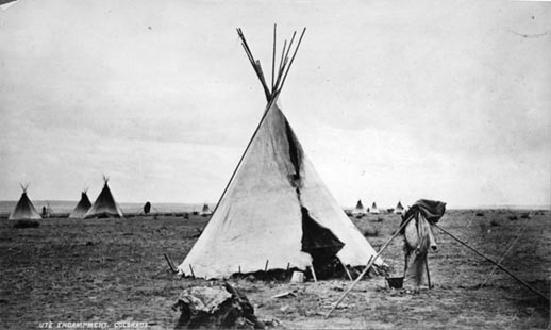 The Cheyenne and Arapaho also used tripods to set up their tipis. The first step was to tie 3 strong poles together to make a tripod. (The Utes used 4 poles.) The tripod held up the other 8 or more poles that were leaned up against it. Then the hide cover was stretched over the poles and staked down at the bottom.

This tepee belonged to Little Raven, an Arapaho chief. The decorations on the sides show important events in his life. The objects in front are his war shield hanging on a spear and a coup stick that he carried into battle with him. 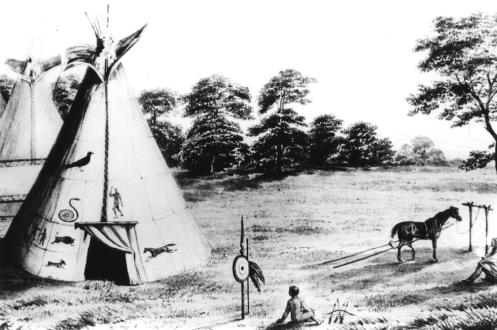 A traveler on the plains could identify an Indian tribe by its tipis. The tipis of each tribe were made in a slightly different way. The Cheyenne tipis were "white as linen," while those of other tribes were darker. They mixed white clay into the tanning solution to make the hides white.

"The tipis of the Cheyenne and the Arapaho were taller than those of other Indians. Anyone traveling the prairies long ago knew one of our villages as soon as he saw it, even before he was near enough to recognize the people or the designs on the chief's tent or the shields and trophies hanging outside."

Ute Man Next to His Tipi

This photo shows a Ute man standing beside his tepee. Next to the tepee is a shield hanging from a pole. This is a ceremonial shield. It probably was used in the Sun Dance ceremony. It is similar to shields that warriors used in battle. 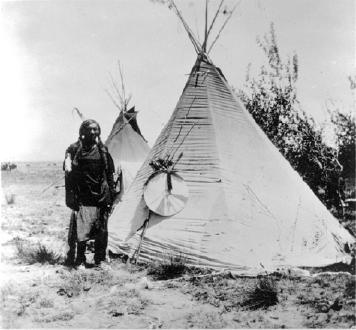 The best wood for tipi poles was cedar, as it did not rot when exposed to rain and snow. As good lodge poles were not easy to find on the plains, the women took good care of them.

"Every warrior had his own specially decorated shield. The toughest part of the buffalo hide was used to make a shield; this when soaked in water and dried slowly, became so thick and hard that few arrows could go through it. In nearly every village, there was a painter who decorated the shields of the men in his village with the design and in the colors that were each man's special protection and power."

The two shelters in this photo are made of poles and brush. Unlike tepees, these are permanent shelters. They cannot easily be moved from one place to another. The Ute Indians used shelters like these before they became buffalo hunters and lived in tepees. 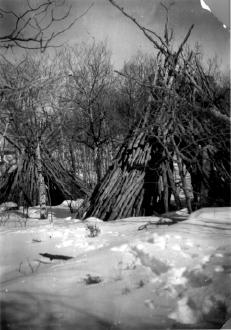 The Utes also built temporary camp shelters that were called wickiups. These were dome-shaped shelters covered with willows, bark, grass or reeds. They were large enough for about 5 people. They quit using them after they became buffalo hunters and lived in tipis.

The Indians in this photo have piled brush beside their tepees as a temporary shelter. It provides shade from the sun and helps break the wind that blows across the plains. 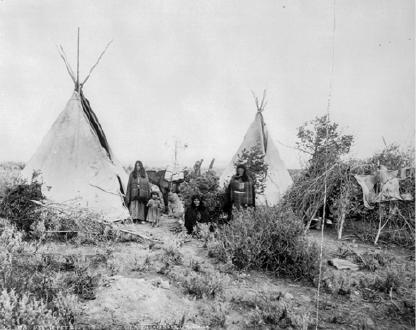 Indians in Colorado sometimes used piles of brush as temporary camps and as a windbreak for their winter camps. The brush was piled up and covered with skins and earth.