What do these photos tell you about how living in an Indian village was like?

This is what an Indian village looked like. The men on horseback may be getting ready for a hunt. Women and children are talking in front of a tepee. There always were lots of dogs running lose in Indian villages. 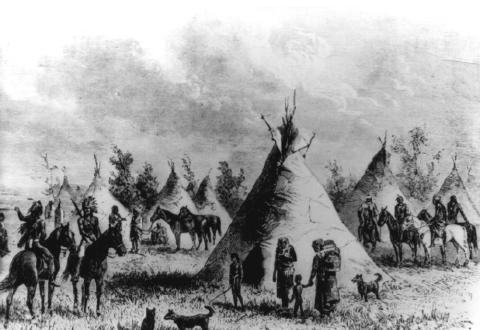 Indian villages were built in a circle, which was left open on the east, the direction of the rising sun. The day began shortly after sun-up with the village crier shouting out news and the chief's orders for the day. The news might be that the camp was to remain where it was for a certain number of days or that a dance was to be held that night.

"Our circle of lodges was open to the east, and each one of the lodges within the circle also opened eastward, to the dawn of light and to the sunrise. That was the way the Arapaho had been taught to build their lodges, at the beginning of time, and that was the way we had always built them."

This is a busy village. Men are gathered for a meeting in a circle. Women are carrying water and wood. Childen are playing and resting. 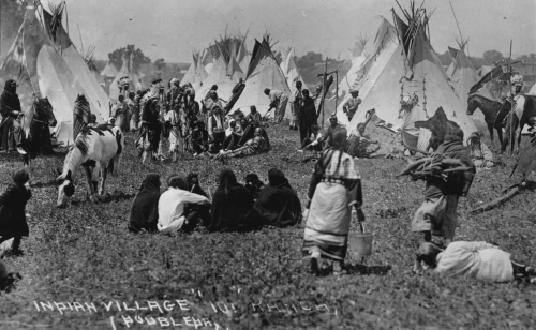 Women and girls had the same chores each morning. The first chore was to get fresh water from a nearby stream. Then they cooked the morning meal, usually boiled meat. Later they went out together in twos and threes to collect fire wood. After that, they might go out to dig roots or prairie turnips. Men hunted, went on raids, and repaired their bows and arrows. They did very little work in camp.

"Dogs played around the doorways; ponies grazed in the open spaces; children romped with the dogs and climbed on the ponies; women sat on the ground sewing moccasins or beading pouches; men straightened arrowwood or strung bows or combed and dressed their long hair."

Source: Carl Sweezy, The Arapaho Way: A Memoir of an Indian Boyhood of Carl Sweezy as Told by Althea Bass (New York, 1966), p. 26.

This is a Ute camp at Ignacio, Colorado. The photo was taken in 1890, after the Utes had moved to a reservation there. 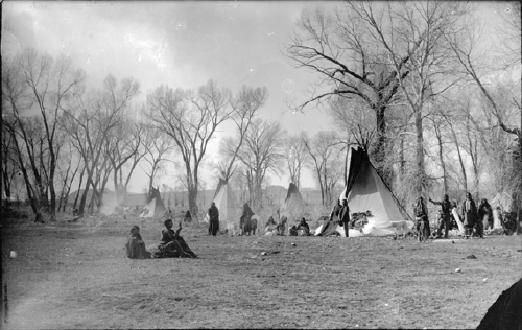 A village made up of tipis was more than just a place to live. It was a special way of life for the Utes, Cheyennes, and Arapahoes of Colorado. It kept people together and close to nature. Many Indians lived in villages made of tepees even after they settled down on reservations.

"Almost every act and custom among the Arapaho was part of their religion. The placing of our lodges in a circle open to the east, and the opening of each lodge on the eastern side, was religious. A man saw dawn when he woke, and prayed to the Man-Above and to Grandfather Sun and to the Four Old Men. He was thankful for the new day, and for the grass and the stream and the game that were outside his tipi."

This photo shows 75 or so Ute tepees pitched in a large camp. Different Ute bands met together each spring or early summer in a camp like this one. 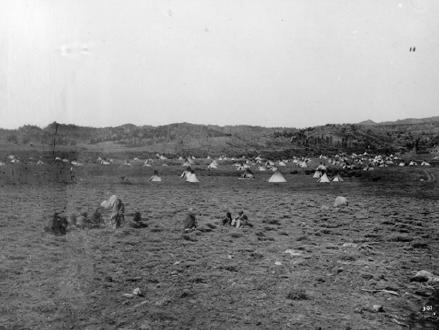 Each Indian tribe was made up of several bands of a dozen or more families. The came together once a year during the spring or early summer for a Camp Circle. It was a big social and ceremonial event. For the Arapaho and Cheyenne, the main ceremony was the Sun Dance. For the Utes it was the Bear Dance.

"Numbering some two hundred or more lodges...erected in parallel lines, [the village] covered a large space of the level prairie....Before each lodge a tripod of spears supported the arms and shields of the Yuta Chivalry [Ute warriors] and on many of them, smoke-dried scalps rattled in the wind."