What do these photos tell you about what early automobiles looked like?

The auto in this photo is parked in a sugar beet field. The field probably was located in eastern Colorado. 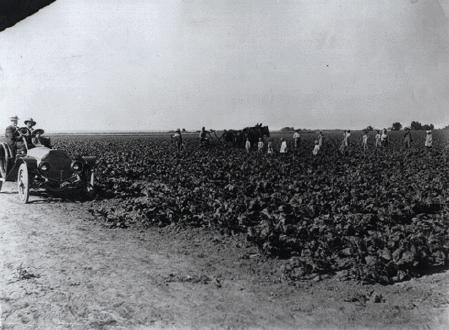 Few farmers could afford an auto like this one. They were expensive to buy and to keep up. Auto drivers had to stop often to fix flat tires. This auto had spare tires mounted on the running board. It may have belonged to the wealthy factory owners who bought the farmers' sugar beets.

“The automobile more than any other one thing has been the means of bringing the farmer in closer touch with the outside world. . . . The automobile is largely responsible for the present high standing of the farmer. With it he can get into the big cities, where he can see and find out what other people are doing and keep pace with their progress. There is, too, another angle that must not be overlooked, and that is that the automobile is a source of pleasure for the farmer’s entire family. We all appreciate a change of scenery once in a while. . . . The farmer has also developed into the shrewdest kind of a buyer—machinery and automobiles in particular. . . .”

This photo shows the main street of Siebert, Colorado. Siebert is on the eastern plains in Kit Carson County. It served as a supply and market town for the farmers and ranchers in the area. This photo was taken about 1906. 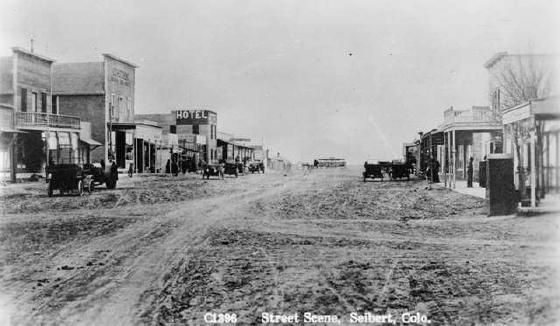 In the photo, you can see several early autos. Early autos were faster than horse-drawn wagons, but they were not always as reliable. In most places, it was not easy for autos and horses to share the same streets. Noises made by the autos sometimes frightened the horses.

In 1902, Webb Jay and a Denver Post reporter made an auto trip from Denver to Evans in three and one-half hours. Said the reporter:"We fairly shot over the road and left a cloud of dust behind that hung in the air for half a mile. . . . My particular duty was to get out and lead horses past the machine [because the car frightened the horses] and between Denver and Evans I had performed this little stunt no less than eight times."

This photo of Main Street in Akron, Colorado, was taken in 1912. It shows a motor car with a canvas top. A man in the street is talking to the car's driver. The photo also shows some of the businesses that these men might be in town to visit on this day. 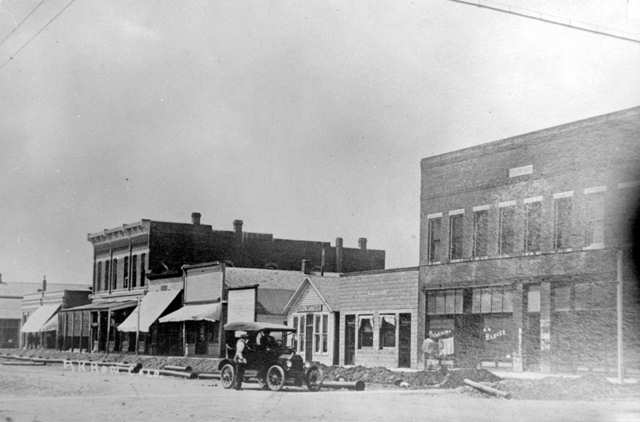 Although motor cars were first viewed as luxuries and fads for wealthier people, farmers and merchants in small towns soon began to view automobiles as a necessity. Because motor cars were faster than horses or horse-drawn wagons, farmers could get to nearby towns more quickly and easily.

"Is the automobile a necessity? It is. It is proving itself so. It is owned by those who appreciate the motorcar as such. It is estimated that more than a third of the automobiles in use in this country are owned by farmers, or those who live in the country, and who find it necessary to make frequent trips to near-by communities to buy supplies or for other purposes. It is true the man in the country was able to get along, in some way, before the automobile came, but it is likewise true that his progress and advancement is dated from the time he was able to use a motorcar. Farm life changed from that time."

This was one of the early autos used on Colorado's Western Slope. The photo was taken in Paonia, Colorado. 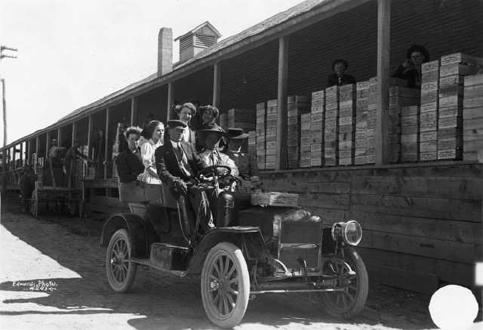 Autos would replace horse-drawn carriages for family travel, but it did not happen over night. Early autos like this one were very expensive. Only wealthy people like the well-dressed man and woman in the front seat could afford to own one. By 1920, auto makers were making smaller cars that most families could afford.

"If there is trouble in the field, if some part of your farm machinery is broken down, the automobile can bring from town the needed help or the parts that you need to get the machine in motion again. Again, the automobile brings the farmer closer to the market, whether it is the local or the distant market, and enables him to market his produce more rapidly and on better terms. The writer . . . says the purpose of his machine is pleasure, business and marketing; that he has hauled apples, potatoes, oats, eggs, butter, pigs, calves and hitched it [his car] to the hay rope to unload hay into the mow [hay loft]"

This photo, taken in 1915, shows an open air farmers' market in Denver, Colorado. It shows horse-drawn wagons and motor trucks near stalls where farmers sold their garden produce. 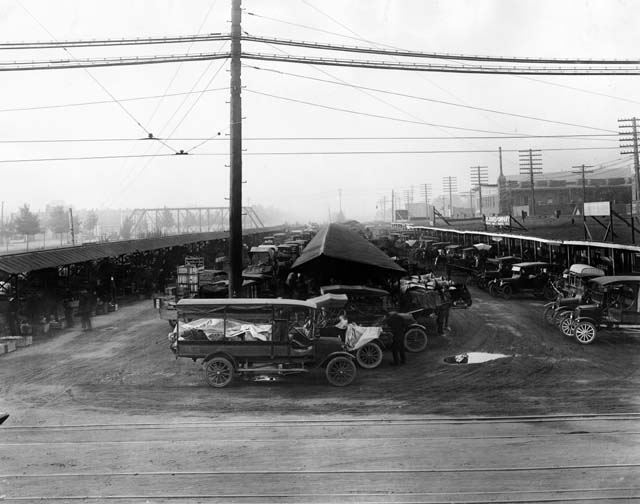 Farmers took their produce to city markets like this one when they used only horse-drawn wagons. (Some of the farmers in this photo still used such wagons.) Even so, farmers' use of motor trucks allowed them to bring their garden produce to city and town markets more quickly. Speed prevented spoilage of garden vegetables, a benefit to both farmers and urban consumers.

"A motor truck offers the farmer the advantage of prompt delivery of his perishable produce, thus reducing waste through decay, as when handled by wagon or railroad, and turning into cash crops which would otherwise be lost. Through its speed it enables him to run his farm with less help, it increases the radius of land profitable for market gardening and small farms around the cities, and will pay for itself in the first six months of use through the actual net saving it will make on any modern farm. With all these advantages and with the absolute certainty of successful operation, there is no good reason why the American farmer should hesitate to purchase motor trucks today."

Farmer's Car Stuck In a Creek

This photograph shows a farmer's car off the road and stuck in a creek. 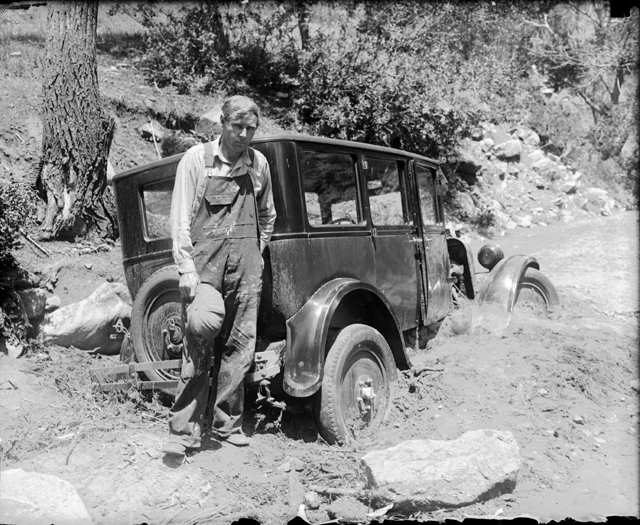 While most farmers viewed motor cars and trucks largely as benefits, automobiles were not without their troubles. The first cars and trucks were not very dependable and roads were often not very good. Also, most people did not know how to drive and drivers' licenses were not required.

"Nowadays . . . when automobiles glide along city streets and country roads at a speed far in excess of that ordained by municipal by-laws, one sometimes wonders if the children of the next generation will know what horses look like. . . . But fifteen years ago a horse was almost as necessary to an automobile as was gasoline. So many were the times when the machine persisted in landing itself in a ditch or, seeming without adequate cause or reason, in the center of the road, that it was never safe to get very far away from first aid. Even now catastrophes happen sometimes, though not so often as formerly.”

This photograph, taken in about 1905, shows the results of a crash between a truck and car in an intersection in a small town. A farmer is looking at the accident. Note that the truck's right front fender is dented and the front wheel is bent. 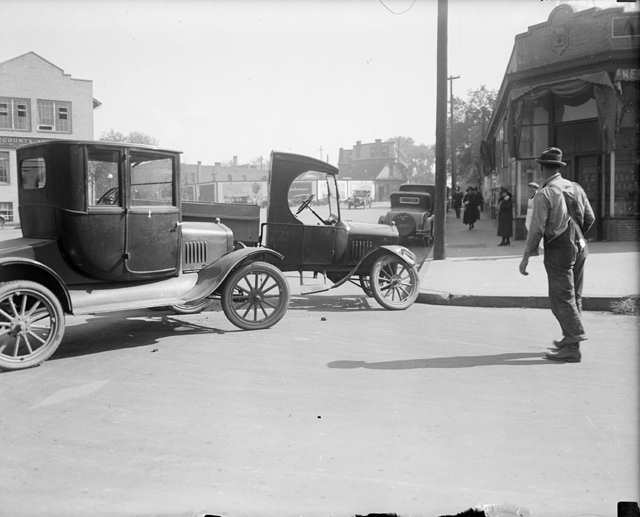 It is hard to imagine why auto accidents like this one occurred when so few motor cars were on the road and town streets were relatively wide. Car crashes may have been due to drivers' inexperience or inattention to their driving. Still, most vehicle accidents at this time were apparently not caused by motor cars and trucks.

"One of the accident insurance companies recently published a statement showing that ‘out of one hundred average accidents caused by the horse, the railroad, the automobile and the bicycle, eighty-two are attributable to the [horse], nine to the railroad, five to the motor car and four to the silent wheel [bicycle]’. More than sixteen times as many average accidents are caused by horses than by automobiles. . . . [Accidents caused by horses] are noted at the time they occur, but they are accepted as of course and are soon forgotten. Automobile and railroad accidents, on the other hand, are remembered for a long time; and, particularly those caused by automobiles are made the basis for arguments in favor of restrictive legislation."