What do these photos tell you about the kind of businesses that were in these towns?

This is a photo of the W. F. Thompson lumber store in Greeley. The photo was taken in the 1870s, when the town was less than 10 years old. 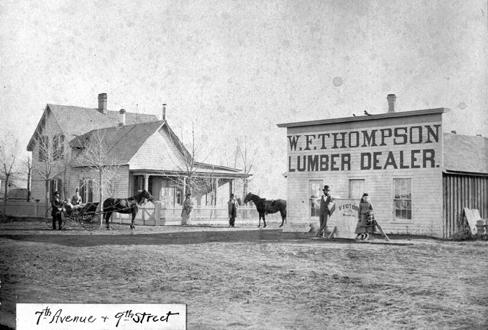 The rural areas of Colorado had towns as well as farms and ranches. The towns supplied the farmers and ranchers with goods that they needed. They bought most of their supplies at the general store. However, larger towns like Greeley also had specialty stories such as Thompson’s lumber store. Saturday afternoons were a popular shopping time.

“In September, 1885, I came to Akron, Colorado. The town had been laid out by the Lincoln Land Company, which was connected with the Burlington Railroad, but there were no houses built as yet. The first building put up in the town was a structure about 16 by 24 feet . . . the Yeaman brothers . . . rented it and started a hardware store in the fall of 1885. The next building . . . became a general merchandise store. The Hallack-Howard Lumber Company of Denver was about the next concern to establish a business here. . . .”

“A post office was established in about December, 1884, and was located in the railroad depot. . . . The growth of the town was rapid in 1886-88. Those were wet years, everything looked promising, and everyone was hopeful.” 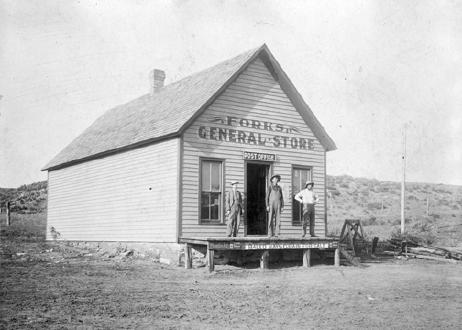 Every farm community had at least one general store. General stores sold all kinds of goods. This general store served farmers and ranchers in Larimer County. It sold hay and grain as well as food and other items.

“The shopping trips to Orchard—four miles away from our second house—were events of importance and an interesting break in the everyday routine of the farm. . . . The clopping of the shod feet of the horses and the iron rims of the wheels made a kind of music, . . . and on up the wide, dusty street to the hitching bars before the Eli Etchison store. . . . We clambered out of the buggy to climb upon the covered porch, which ran the length of the store front and hid the great, high, false front that rose above the porch and announced the general store even at a distance. . . . When we entered the store . . . now began our slow inspection of everything in the store."

“We went slowly from one counter to another admiring, commenting, and hugely enjoying ourselves. Meanwhile our parents were talking prices and quality of the staples that must be secured at the store since they were not produced on the farm. Sugar came in hundred-pound sacks as did the flour, which was always bought several sacks as a time. . . . Rice was bought in bulk and eaten with sugar and milk. . . . The dry goods shelves were a special pleasure—all those charming calico patterns. . . . Last of all the kerosene for the lamp was bought. One of us was sent running back to the buggy to bring in the ‘oil can,’ and we watched it being carefully filled with this precious fluid."

This photo was taken in Elizabeth, Colorado, a town in Elbert County. It shows three of the buildings on the town’s main street. 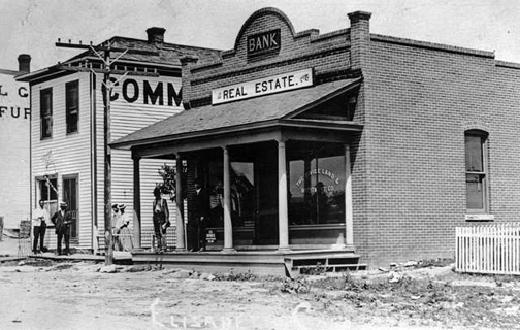 Most towns had specialty stores and businesses as well as a general store. The buildings in this photo include a bank and real estate office (right) and a furniture store (left). The building in the center may have been a hotel.

"For some time plans have been formulating for the purchase of the stock, fixtures, business and good will of the Bank of Akron, and this week the deal was [completed] whereby the old bank will be changed from a state or private bank to a national bank. . . . 'In union is strength' . . . and for this reason a company of leading business men and ranchmen of Akron and Washington county organized and took over the old property and will infuse new life into it and make it a helpful medium for the advancement of our town and county."

"The history of the old bank dates back nearly 25 years when in 1887 some of the townspeople realized the necessity of a bank for our young town. They builded [sic] it better than they knew and laid the foundation deep and solid, making it one of the financial institutions that weathered panics, droughts and other drawbacks that beset the homesteader, the cattleman, and the businessman of our town as well. . . "

The ice delivery wagon in this photo was owned by a man in Longmont. 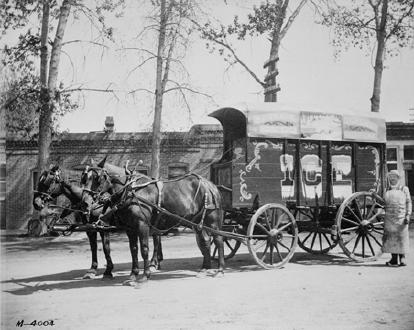 Large towns like Longmont had many specialty businesses. It even had an ice dealer who delivered ice to people’s houses. Ice dealers cut the ice from ponds during the winter. They packed it in sawdust in sheds to keep it from melting and sold it the next summer. They usually sold ice to homes in 25 pound blocks. People placed the blocks in their kitchen iceboxes to keep food from spoiling during the summer.

“There was a big ice plant . . . called the Hygienic Ice Company. They made ice in big chunks, and then they sold them from these wagons that went around town. You had a sign that you’d put in your front window if you wanted ice, and [the iceman] would drive up and down the street. If you needed some ice, you would have a sign that said ‘ice,’ and you had a place where you put ‘25’ or ‘50’ pounds. They were in blocks and then he would stop on the street. . . . I think a chunk of ice like that would last two or three days, maybe a week. I think it was ten cents for a big block of ice.”

This is a photo of Fred Bernstein’s clothing store in Greeley. The owner is standing in the doorway. 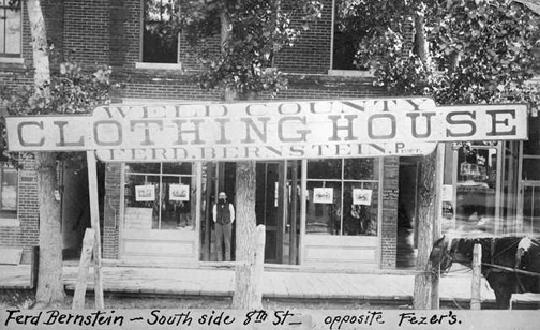 By the early 1900s, large towns had men’s clothing stores that sold factory-made clothes. Women’s clothing was still largely made at home or by seamstresses who made dresses for a living.

“Miss Turner also made my clothes. They were well made, but the pants were so short in the leg that they did not suit me. One Saturday my mother took me to town with her and looked at some overalls for boys. How I did want them, but the fool clerk nearly upset the sale, for Mother noticed a watch pocket on the right hand side and asked him what that was for, and he answered, ‘To keep his tobacco in.’ I thought for a while that I was to continue in short pants, for she did hate the weed, but she relented and bought them.”

This is a photo of Foote & Stoddard’s livery stable in Loveland, Colorado. The sign says Livery, Feed & Sale Stable. The photo was taken in 1885. 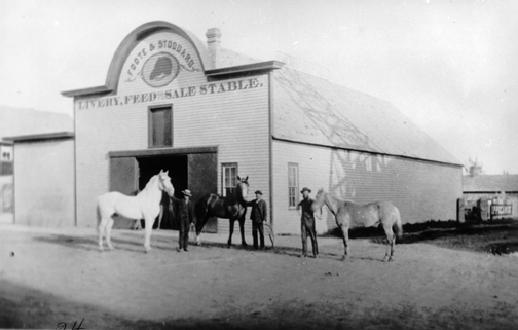 Most towns had livery stables. These stables rented horses. Livery stables were needed because many families living in town did not own a horse. The stables also kept and fed horses for visitors who rode into town. The livery stable in this photo also sold horses.

“The townsite of La Jara [in the San Luis Valley] was just being surveyed, and that country was booming; I helped with the surveying, and then built my first business—I called it the Pioneer Livery Barn. . . . I began to branch out a little, as my livery barn prospered. . . . For it had become apparent to me that one of the crying needs of our community was a market for the live stock and products of the farm, for those who did not produce in sufficient quantities to ship in carload lots.”

“I announced that I would be in the market at all times for the purchase of hogs, sheep, cattle, potatoes, grain, etc. In fact, I was soon buying everything the farmers raised, except children. It proved very beneficial to the grower to have a ready market for his surplus, and besides it was extremely remunerative to me.”

The building in this photo is a farm implement store. It was owned by Peter Huffsmith of Greeley. 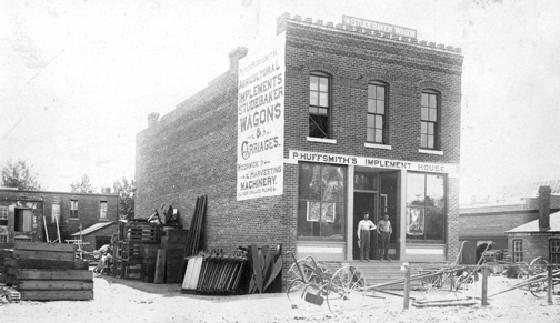 “[As] that country [the San Luis Valley] was booming . . . It seemed to me that there would soon be a good demand in the Valley for implements, furniture, and hardware. So I opened up a store and began selling these items, and lots of others. On the list were: hay presses, barbed wire, wagon and carriage material, threshing machines, building material, hardwood and eastern lumber, buggies, and farm implements. I bought, traded, and sold.”